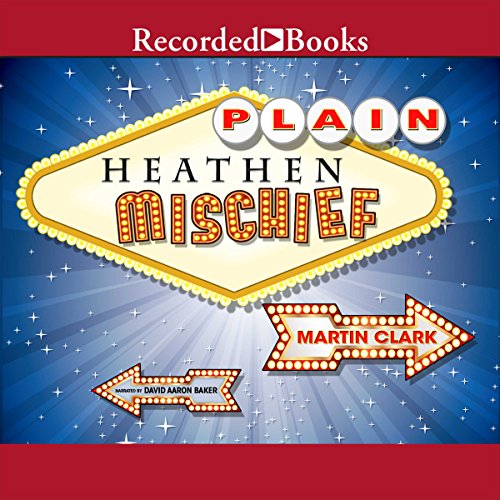 Plain Heathen Mischief ups the existential ante, as Joel King, a defrocked Baptist minister, finds life even more bedeviling once he's served six months for a career-ending crime he might not even have committed. Now his incommunicado wife wants a divorce, the teenage vixen of his disgrace is suing him for a cool $5 million, a fresh start in Montana offers no hope for ex-cons of any religious persuasion, and the refuge provided by his sister turns as nasty as his parole officer. Talk about a crisis of faith.

On the upside,a solicitous member of Joel's former congregation invites him into a scam that could yield some desperately needed cash, and soon the down-on-his-luck preacher is involved with a flock of charming con men, crooked lawyers, and conniving youth.

In a feat of bravura storytelling, Martin Clark ranges from the cross to the double cross, from Virginia to Las Vegas, from jail cells to trout streams, as he follows his Job-like hero through dubious choices and high-dollar insurance hustles to a redemption that no listener could possibly predict. Wildly imaginative, at times comic, at times profoundly sobering, and even more audacious than his wonderfully idiosyncratic debut, Plain Heathen Mischief is a spiritual revelation of the first order.

I think I lost 10 yrs in 20 hrs. Very intense at times ie, wth is Joel doing NOW?! The ups, downs and mind blowing BAD decisions ol Joel makes is a ride. Clark is a masterful story teller and Baker the cherry on top! I found myself rooting for Joel then yelling at his arrogance, ignorance and naïveté . Clark has captured human nature at our ability to deceive ourselves. How Preacher Joel can convince himself he’s still righteous above others as he cheats, lies and deceives himself into a huge cluster-f because he’s doing it for “good” and “the Lord”. I had to laugh each time Baker said it, with just the right bit of piety. Brilliant writing, memorable characters. My Lord, i wish there was a sequel! Onto the next Clark book, there are TOO FEW!

Not My Favorite of Clark's

I really love the way Martin Clark writes. Even his lesser books are very, very good. That having been said, I didn't love this one. His characters are compelling because they make such messes, and then you get to watch them weave their way out of them. Usually, that makes them really engaging. In this one, not so much. By the middle, I was getting a bit tired of Joel and beginning to wonder if maybe he wasn't too bright? Still, the writing is as engaging as ever, and Clark's dialogue is always great.

With this manuscript ever submitted to an editor?

This book could have been an interesting read if about half of it had been edited out. Every time it started to get entertaining, the author wandered off into territory that had nothing to do with furthering the plot. I stuck with it because I wanted to find out what point he was trying to make, but it was extremely frustrating!

started really slow, but became interesting. Storyline was pretty well conceived. I'd recommend for those who don't have string feelings avout religion...either way.

Hoped through to the end the author would help me like the main character.

Very disappointed, the author’s other books had enjoyable twists and interesting characters, this one not so much.

Intermittent flashes for sure

I read an earlier review, and I wish I had not. It mentioned that the book was in serious need of an editor. I could not agree more. Parts of the book were very good, but one has to weed through masses of unnecessary and frustrating parts to get there. Seems like it could have been whittled down.

That being said, the narration was superb. The different characters all very well done and unique without being corny.

Joel is having a rough time, he's been accused of a crime he has never admitted to committing and he's had to spend 6 months in jail as a result.

Newly paroled he seeks the help of an old friend to make it to his sister's in Montana. The minute he steps out the prison gates, things snowball.

A funny, clever tale, with lots of twists; you find yourself really rooting for Joel and wishing him a happy ending.