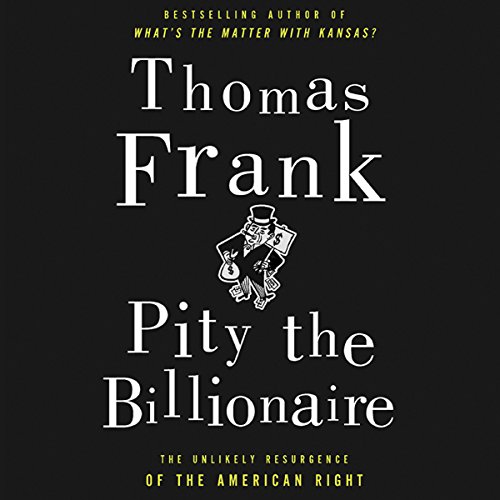 From the best-selling author of What's the Matter with Kansas?, a wonderfully insightful and sardonic look at how the worst economy since the 1930s has brought about the revival of conservatism.

Economic catastrophe usually brings social protest and demands for change - or at least it's supposed to. But when Thomas Frank set out in 2009 to look for expressions of American discontent, all he could find were loud demands that the economic system be made even harsher on the recession's victims and that society's traditional winners receive even grander prizes. The American right, which had seemed moribund after the election of 2008, was strangely reinvigorated by the arrival of hard times. The Tea Party movement demanded not that we question the failed system but that we reaffirm our commitment to it. Republicans in Congress embarked on a bold strategy of total opposition to the liberal state. And TV phenom Glenn Beck demonstrated the commercial potential of heroic paranoia and the purest libertarian economics.

In Pity the Billionaire, Frank, the great chronicler of American paradox, examines the peculiar mechanism by which dire economic circumstances have delivered wildly unexpected political results. Using firsthand reporting, a deep knowledge of the American right, and a wicked sense of humor, he gives us the first full diagnosis of the cultural malady that has transformed collapse into profit, reconceived the Founding Fathers as heroes from an Ayn Rand novel, and enlisted the powerless in a fan club for the prosperous. What it portends is ominous for both our economic health and our democracy.

"No one fools Thomas Frank, who is the sharpest, funniest, most intellectually voracious political commentator on the scene. In Pity the Billionaire he has written a brilliant expose of the most breath-taking ruse in American political history: how the right turned the biggest capitalist breakdown since 1929 into an opportunity for themselves." (Barbara Ehrenreich)
“Thomas Frank is the thinking person’s Michael Moore. If Moore, the left-wing filmmaker, had Frank’s Ph.D. (in history from the University of Chicago), he might produce books like this one.” (Michael Kinsley, The New York Times Book Review)
“A feisty and galvanizing book… This is the kind of analysis - historically astute, irreverent and droll - that makes Frank such an invaluable voice. As he's done in a series of perceptive books, Frank cuts through the partisan blather and explains how money and cynical ideas shape a certain kind of contemporary politics. Pity the Billionaire is further evidence that he's as good at this as any writer working today.” ( San Francisco Chronicle)

What listeners say about Pity the Billionaire

A powerful critique of faux populism

Frank's wit shines as he he delivers a scathing rebuttal to the powerful figures leading the ultimately self destructive movement. I say self destructive, dispite the rights recent success in elections, because the antidote they prescribe is exactly the source of our problems. Frank points out that the political rights ideas will only make the issues worse. Very well illustrated and eloquently preformed, Thomas Frank proves he is a true populist warrior fighting fake populism.

Intelligent analysis of a stupid phenomenon

Would you consider the audio edition of Pity the Billionaire to be better than the print version?

How would I know? The audio edition is moving and insightful, but I haven't read the print version.

What was one of the most memorable moments of Pity the Billionaire?

Understanding how citizen outrage at profligate government/corporate corruption morphed into the Tea Party reality-rejecting echo chamber. It's a remarkable story of money and manipulation. You certainly can fool some of the people all of the time.

The CEO of Massey Energy (multi-millionare beneficiary of lax safety practices that killed dozens of miners) rallying a crowd of middle class idiots with anti-government rhetoric.

Self-reinforcing nature of faith and politics, not blatant stupidity, precludes people from questioning the beliefs that lead to this mass crazy. Joe the Plumber really believes he's better off under Bush/McCain no matter the evidence to the contrary.

Both entertaining and thoroughly depressing to think that so many American voters lack the critical reasoning skills see through the mendacity of the monied leaders of this Astroturf movement. Our public education system has failed us.

great read from a insightful author

This is another great work by Thomas Frank. I loved it. As with all of his work he covers the issue in a unique way. His historical insights add depth to his political arguments and his critique of all sides makes this work more useful then the usual good guy bad guy narrative of other political writers.

Very Informative, and well thought out. Thomas Frank is, by far, the clearest writer on the subject matter of understanding the appeal of the conservative mind.

another outstanding book by Thomas Frank

Where does Pity the Billionaire rank among all the audiobooks you’ve listened to so far?

one of the best. The author is extremely engaging. His data and research are impeccable.

What other book might you compare Pity the Billionaire to and why?

It is hard to compare Thomas Frank to anybody. He writes differently and researches differently. He really stands in the category by himself. His body of work is different than any other author that I can think of.

if you're a political junkie, this book is a must-read.

Another important book from Frank

What made the experience of listening to Pity the Billionaire the most enjoyable?

The chapter on Ayn Rand was worth the cost of admission.

The book has important insights about how the public has allowed wealth distribution to get so out of whack while doing nothing substantive in order to protect the public.

What does Thomas Frank bring to the story that you wouldn’t experience if you just read the book?

It's great to hear the author read the book when the author has the charisma that TF has.No one sneers at hyporcrisy so well.

As with all TF books I found myself simultaneously laughing out loud and wanting to wash my eyeballs.

Exactly what I was looking for

This book explained to me better than any I have read what the Tea Party is about and why I have been so disappointed with the Democrats response to both the political right and the recession. I doubt many on the right will be able to listen to it all the way through - just as I haven't been able to listen to any extended writings from the radical right. Frank can be very harsh as he is illuminating. The book does not give any solutions but serves as a starting point depicting the Tea Party development and their relationship with the right. I have a much better understanding of how we got here and for the first time in a long time I feel some comradery with the Tea Party even though I still think they have gone down a very dangerous path for America.

I will be thinking about this book for a long time.

It's not loaded with statistics, and doesn't go into too much detail, but Frank's arguments are complete and well-structured. I think he writes assuming that the reader (listener) of his book is well versed in current events and the various positions of the government and media players he talks about. This seems to be a supplement to what we all watch on TV and read in the political press every day. And, as well done as it is, I have to agree that it is indeed more of a "rant" than an academic treatise.

However, it is not all one-sided in its treatment of the two major parties. Those who say it's just a pro-Democrat, anti-Republican screed obviously didn't listen to the whole thing. In my opinion, the best part of the book is Frank's comparison of the last 5 years to the 1929-1934 US response to the great depression. The parallels are unsettling and he is very even-handed in criticizing our government's response to the Great Recession.

I actually agree with Frank and am on his side. I appreciate his position of exposing current right wing politics. But! This book is so over the top! It is dramatic (!), too sensational (!), vague (!) and lots of other wasted opportunities (!!). This is more theatrics that a serious discussion that is needed. Sorry, it is just silly. ("El Rushbo" and all!)