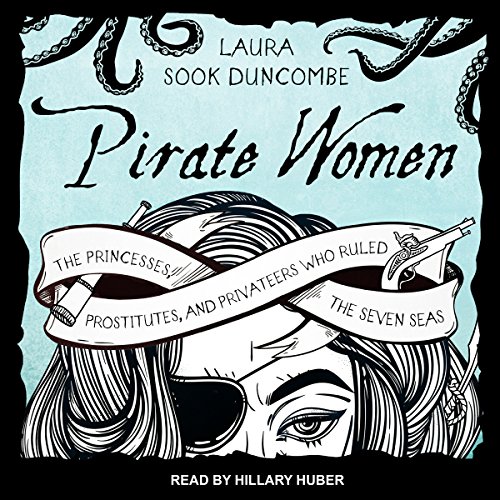 In the first-ever history of the world's female buccaneers, Pirate Women: the Princesses, Prostitutes, and Privateers Who Ruled the Seven Seas tells the story of women, both real and legendary, who through the ages sailed alongside - and sometimes in command of - their male counterparts. These women came from all walks of life but had one thing in common: a desire for freedom. History has largely ignored these female swashbucklers - until now. Here are their stories, from ancient Norse princess Alfhild and warrior Rusla to Sayyida al-Hurra of the Barbary corsairs; from Grace O'Malley, who terrorized shipping operations around the British Isles during the reign of Queen Elizabeth I, to Cheng I Sao, who commanded a fleet of 400 ships off China in the early 19th century. Author Laura Sook Duncombe also looks beyond the stories to the storytellers and mythmakers. What biases and agendas motivated them? What did they leave out? Pirate Women explores why and how these stories are told and passed down and how history changes depending on who is recording it. It's the most comprehensive overview of women pirates in one volume and chock-full of swashbuckling adventures that pull these unique women from the shadows into the spotlight that they deserve.

"Duncombe's well-researched account will appeal to history and women's studies aficionados, lovers of myth and lore, and all interested in viewing the past through a new lens." ( Booklist)

What listeners say about Pirate Women

At first I thought I couldn’t listen to this book I found the narrator dull and almost robotic, it seemed more like a droning lecture then an exciting book about female pirates. So I changed the speed to 1.25x and bam not so dull, the narrator seemed to have more inflection in her voice and I’m glad I persevered as it is a good book.

Don’t waste your time or credit

I wanted to really enjoy this book, but I just couldn’t. Hillary Huber does an excellent performance per usual, but this story was all over the place. Huber is fast becoming my favorite performer. There was more backstory about the men shaping pirate women than women. The stories of these pirate ladies had so little evidence and actual fact for the most part that she should have framed the books as famous mythological pirate women. If there is so little source material for your book, perhaps change the outline? Duncombe only really showed her skill at writing and analysis in the final chapter when she took on Hollywood film, and even then it seemed like pirate women were an afterthought. I’d listen to Duncombe explore the role of women in film for 9 hours, if I had bought a book about women in film. Duncombe has raw talent and good ideas, but like many female pirate films, this book was a flop. I’m looking forward to better developed work from her however.

Great facts but a little boring.

This felt more like a class lecture book with matter of fact tidbits and less visual descriptions. Good information and I like that the author highlights how women could have been viewed/altered for a "better" tale or a more palatable one.

Not what I hoped for.

I purchased this book to learn more about, and enjoy the historical stories about women in the pirate world. They most definitely were there and they were very active participants. To be fair, I did learn of many I had never heard of and the reports were sometimes unsubstantiated but the information was fun.

What was not enjoyable began in the Forward and permiates throughout the rest of the book. You will enjoy this book much more than I did if you hate men or regard them as the source of all problems for women in the world. The author incessantly drones on and rehashes her personal disdain for men and even dedicates a chapter to attack Hollywood for not doing more female pirate themed movies.

The narrator was very good, she even captures the disdain of the author in her reading. Well performed!

It was a struggle at times to not simply give up and delete this book. Sadly I cannot recommend this book to anyone wanting to enjoy a historical recounting of women pirates unless you enjoy sexist bashing of men.

I read a lot of pirate books -nonfiction and fiction and this is my favorite. It explores women pirates that weren’t even mentioned in other books as well as how these women’s stories are perceived and were recorded. The narrator was also excellent.

Sorry but the voice sounds too much like a robot, which is not her fault, but she could have realized this and really tried harder to not sound she's just reading words like a robot and not really feeling the emotion and punch behind the author's words. Disappointing. Going to have to read it myself I guess.

History should always be told as stories

Engaging to listen to, with a broad scope and depth - rising and falling, speeding up and slowing down like good fiction. Satisfying in a way that so much factual information rarely is. All that and a call to arms too - I feel inspired! The narrator is also a good match to the text - she adds so much warmth it feels like I’m listening to the storyteller directly.

So promising, so disappointing.

This topic is so exciting, but this book got so sidetracked and tangential, it was hard to follow. The author often seems to be reaching for a more feminist viewpoint in with every character that she had with every pirate she profiles. Too much conjecture far too much commentary not nearly enough well- researched fact in this book. I was really excited to read and to learn about these women pirates but the author but the way that it was written it was very disappointing, and rather juvenile. Like the first draft of a intro to women’s studies final paper that got expanded into a book.

Excellent book, good to fall asleep to, narrator has too soothing/robotic voice to listen otherwise

The subject is great, the actual book is poorly written, poorly researched and filled with over the top biases.

I enjoyed the historical information & the fascinating u formation on a somewhat unknown subject area.

However this was somewhat ruined for me by a bias and gender issue that I felt ruined a very positive message and read.

The unique aspects and focus is a excellent listen and worth while but this can be challenging at times due to certain view points and strong position that seems to detract from the focus of this for me.
I do not challenge these view points just the value they add to this book.