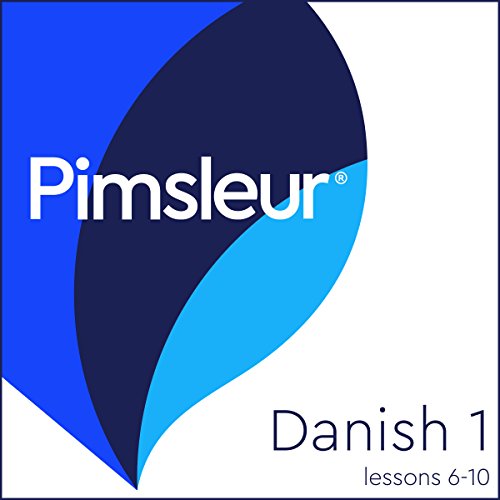 Surprise your friends! Astonish your family! With Pimsleur® you'll be speaking and understanding like a native in no time. Thirty minutes a day is all it takes!

This course includes lessons 6-10 from the Danish level 1 program, featuring 2.5 hours of language instruction. Each lesson provides 30 minutes of spoken language practice, with an introductory conversation and new vocabulary and structures. Detailed instructions enable you to understand and participate in the conversation. Practice for vocabulary introduced in previous lessons is included in each lesson. The emphasis is on pronunciation and comprehension and on learning to speak Danish.

The Danish language, a North Germanic language based on Old Norse, is spoken by some six million people, primarily in Denmark although there are some speakers in Norway, Sweden, the Faroese Islands, and Greenland. Within the country of Denmark, there are many different dialects spoken. Generally, the newscast or standard Danish (also referred to as rigsdansk), which is based on the dialects spoken in and around Copenhagen, is considered the most desirable dialect. This course adheres as closely as possible to standard Danish. Because of the large number of similarities between Danish, Norwegian, and Swedish, knowledge of any one of these languages makes it possible to understand the others. This is true for both spoken and written forms.

"Pimsleur programs provide plenty of positive reinforcement that will keep learners on track, and we found that Pimsleur gave us more proficiency and confidence in speaking the new language than any of the other language programs we reviewed." ( AudioFile magazine)

This is my second attempt at trying to learn a new language on my own. The first attempt was German with Rosetta Stone. I did not learn much as the format that they used seemed rather boring and I lost interest. My second attempt is Danish with Pumsleur. I love it. I like the format of hearing the words spoken by both male and female voices. It keeps me interested and builds slowly enough so you don't forget what you have learned in the past. It says to do one unit a day but I usually review the unit I am on until I feel I have it before I go to the next unit. I hope they have an advanced Danish by the time I am done with the beginner level.

Does a great job teaching you on your commute.

Pimsleur won't make you literate, but it will help you understand and speak a new language.
It's a great reinforcement tool in the car, but would be best coupled with, or preceding, Duolingo (free) or Rosetta Stone (expensive)

I first found Danish very intimidating but Pimsleur approach is so natural that Iin only 10 lessons I became very confident.
I want some more...

just as the first, beautifully made!!

just as the first, beautifully made!! I will continue with this serie as is very good