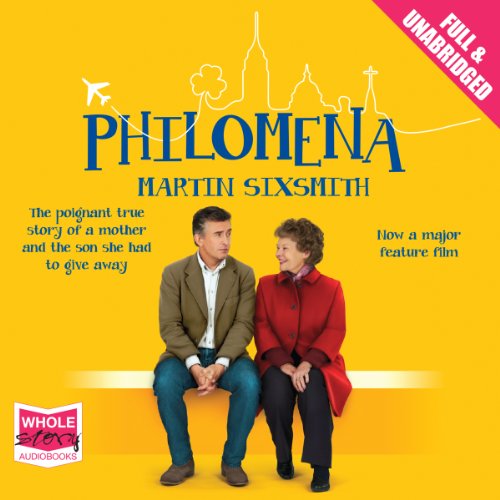 Falling pregnant as a teenager in 1952, Philomena Lee was sent to the convent in Co. Tipperary to be looked after as a fallen woman. She cared for her baby for three years until the Church took him and sold him, like countless others, to America for adoption. She spent the next 50 years secretly searching for him, unaware that he was searching for her from across the Atlantic.

did not enjoy the narrators bad Irish accents, surely an irish (female) narrator would have been a better choice?

good story though, enjoyed it and i like that it was very long.

What was one of the most memorable moments of Philomena?

the kids getting taken away - harrowing

no, disliked the narration

Was Philomena worth the listening time?

Title should be Anthony/Michael, NOT Philomena

This is the story of Anthony Lee, with a lot of fictional dialogue and imagined thoughts imposed on the main players. I'm glad I read the book and at certain points I was keen to know what would happen next, but it was a let-down in many ways. The opening chapters tell of Philomena's ordeal living at the convent and giving up her child for adoption, and towards the end we meet Philomena again when her daughter searches for her half brother. But in between these two appearances, the book is about Anthony-Michael. This is all interesting enough, but I kept wondering what was happening to poor Philomena whose grief would have been immense, and the longer she was left out of the story the more irritated I became. I have no idea why the book title is 'Philomena' and why the book cover photo suggests that Philomena and her son are eventually reunited. To me, the publicity for the book and film are very misleading. The narration is little more than a reading of the text. The voice lacks character and the presentation is pretty flat.

What would have made Philomena better?

A different narrator. This reader just managed to pinpoint the book's weak areas after five hours of misery from him and the self-pity from the characters I couldn't go any further. Perhaps a different narrator would have improved the whole atmosphere. I just couldn't continue.

Would you ever listen to anything by Martin Sixsmith again?

I would listen to this again with a different narrator. The book is supposed to be wonderful. I did find it a bit heavy as there was absolutely no humour at all and some of the poignancy was lost to me because of the endless misery.

Important Story that deserved to be heard

Where does Philomena rank among all the audiobooks you’ve listened to so far?

The story itself is one that is very important to me, the direction in which the book takes the story was a surprise to me, in as much as the detail involved in Michael / Anthonys own personal life. I did have to shelve the book so to speak a number of times as the emotion of sadness and anger overcame me.

What was one of the most memorable moments of Philomena?

I thought the narrator was poor to be honest. His camp for Michaels friends were unnecessary and at times offensive. His imagining of irish accents in this story were cringeworthy and sometimes took from the story. If this has been another book, i dont think i could have continued with this in mind. I simply dont understand the need to attempt accents in this context.

This book is essential reading / listening for irish people, adopted people, birth mothers and indeed catholics alike. Whilst most of these stories are quickly forgotten by the public it is important to remember the cruelty that the irish catholic church in collusion with the state were and still are capable of. Please those of you outside of this story consider that people in Michael / Anthony's position remain unable to legally access their own birth records in 2014. This is the story of today and along with the compensation to the mothers that lost needs to be addressed.