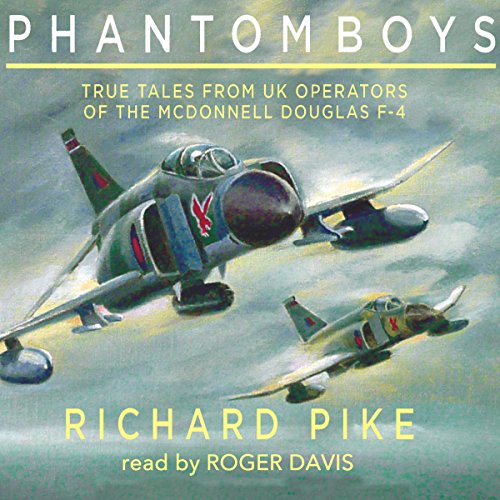 From Richard Pike, best-selling author of Hunter Boys and The Lightning Boys, comes the newest addition to Grub Street's popular Boys series: Phantom Boys. Originally developed for the US Navy, this twin-engined supersonic long-range fighter-bomber first flew in the spring of 1958. It then entered service for the US Navy in 1961, and in 1969 with the Fleet Air Arm and RAF in the UK.

Regarded as one of the most versatile fighters ever built, the Phantom F-4 was the US Navy's fastest and highest-flying aircraft. It was flown by both US military demonstration teams (Navy Blue Angels and the Air Force Thundercats) from 1969 to 1973. It ended its service in 1991 with the RAF. But it continued to serve a variety of air forces across the world, with some still in service 50 years after its first flight.

Throughout the 20 chapters of this book, 13 contributors will take listeners across the world with adventures in the Falkland Islands, the United States of America, the United Kingdom, the Far East and Germany. There are anecdotes of reconnaissance missions, encounters with the Russian Tupolevs, record-breaking flights and life on HMS Ark Royal. The scope, flair, and pace of the writing in this book will appeal to the general listener as well as to the enthusiast.

What listeners say about Phantom Boys

Worth a listen but nothing special

Many gems of information amongst much rambling. Not as good as some others in the series but the Phantom didn't see much action in the UK aside escorting Bears away from UK airspace. That made for good content but the rest of the book spent much time talking about the Lightning and general accidents and mishaps. I got the impression the Phantom was desperately unreliable from this book. I know it had an unreliability reputation in service but I guess the best stories and anecdotes would be based around this theme rather than anything else given it's history. I liked the narrator, I know some folk find him to be an acquired taste but he works well for my ears.

Another fascinating audio history of a RAF classic.