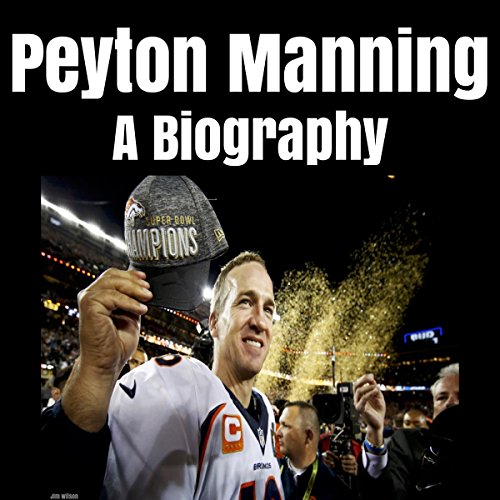 Peyton Manning is a former American football quarterback who played 18 seasons in the National Football League (NFL). A five-time league MVP, he played for the Indianapolis Colts for 14 seasons between 1998 and 2011, and then with the Denver Broncos for four seasons from 2012 to 2015. Manning is a two-time Super Bowl winner (XLI and 50), and also appeared in the game two other times, becoming the only quarterback to start the Super Bowl for two different franchises more than once each and the only starting quarterback to win a Super Bowl with two different franchises. He is a son of former NFL quarterback Archie Manning and older brother of New York Giants quarterback Eli Manning.

Manning played college football for the University of Tennessee, leading the Tennessee Volunteers to the 1997 SEC Championship in his senior season. He was chosen by the Indianapolis Colts with the first overall pick in the 1998 NFL Draft. Manning's playing career and statistics have ranked him among the greatest quarterbacks of all-time. From 1998 to 2010, he led the Indianapolis Colts to eight (seven AFC South and one AFC East) division championships, two AFC championships, and a Super Bowl championship (XLI).

Manning is the first and only quarterback to achieve 200 career wins (regular and postseason), his five NFL MVP awards are a league record, he was the most valuable player of Super Bowl XLI, he was named to a record 14 Pro Bowls, he has 14 4,000-yard passing seasons (NFL record), and he is the NFL's all-time leader in both passing yards (71,940) and touchdown passes (539).

During a 2009 Monday Night Football game, Manning received the nickname "The Sheriff" from color commentator Jon Gruden due to his tendency to audible prior to the snap, and he was one of the most recognizable and parodied players in the NFL. Teams led by Manning typically utilized the hurry-up offense in place of the standard huddle.

What listeners say about Peyton Manning