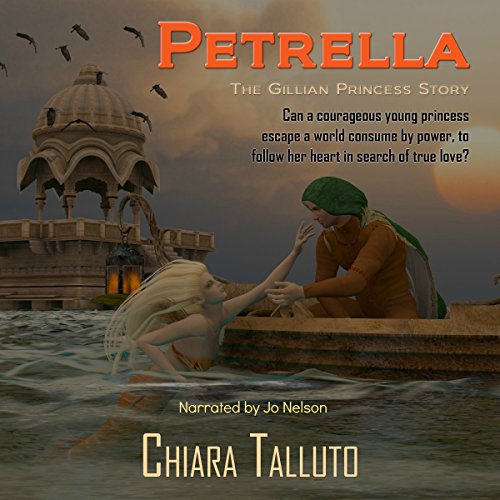 Petrella, the Gillian Princess fairy tale interweaves themes similar to The Little Mermaid, Cinderella, Tangled, Sleeping Beauty, and Noah's Ark. It's a story of hope, bravery, and triumph. It is meant to be enjoyed by all listeners young at heart, but especially aimed at those children who enjoy middle grade fiction. You can listen to it with your child, or they can listen to it themselves.

Can a courageous young princess escape a world consumed by power, to follow her heart in search of true love?

The year is 2041 AD. Yemell, the new world, is divided by land and sea and governed by kings; separated into kingdoms with strict laws in place to help maintain order. There are humans on land and a newly evolved ocean-bound species, the Gillians.

Princess Petrella is a gentle Gillian female. An admirer of all sea creatures, she is enchanted by romance and longs to fall deeply in love with that special Gillian male. Instead, she becomes smitten with a Human named Finerd. Relations with humans are forbidden on Yemell. Her father, Hermas, the Gillian king of the Anglon Kingdom, has ruled his kingdom with an iron fist for over 30 years.

Alas, Anglon is in dire straits. Rebels are overthrowing neighboring kingdoms and the king's health is quickly failing. Hermas has no living male heir. To remain powerful, King Hermas must ensure that his only child, Princess Petrella, marries a wealthier Gillian prince from another kingdom. But, the young princess can't tame her feelings, and neither can Finerd.

Will Petrella pursue this dangerous affair, defying her father's mandate, and put their kingdom at risk?

What listeners say about Petrella, the Gillian Princess

Would you consider the audio edition of Petrella, the Gillian Princess to be better than the print version?

Not better, (not worse!) just different. I really enjoy audio books and being read to. Audio is the perfect forum for a children's story. But books offer imagery that the audio does not. I felt the pacing of the reader was fast and I found myself missing elements of the story. With a book, you can read at your own pace.The BEST part of audio is they pronounce the hard words for you, and I felt like there were words I may have stumbled over if I was reading the book myself. :)

I'm a sucker for fairy tales. The author did a nice job creating the worlds and characters. It was familiar and engaging. I thought this was a children's book, but some of the subject matter seemed aimed at older ages. For an upper middle grade/YA it could have been longer with more conflict and resolution. Who doesn't like a happily ever after ending? But I thought it odd that there was no reaction to her father's death or mention of her leaving her home world.

The narrator had a lovely voice and I thought the accent contributed nicely to the fairy tale but as I mentioned, sometimes the words seemed rushed.

It was only an hour long, but it took me three sittings to listen through.

I would recommend that the information following the story be in another voice. The vocabulary, questions, and author's notes were a nice addition and would stand out better if they were allowed to stand alone. Again, the questions seemed rushed. A pause (not too long) for consideration would be effective before hitting us with another question.Overall, I thought it was a nice fairy tale delivered in a nice way.

Petrella, the Gillian Princess was a beautiful story that captured my attention from beginning to end. There was never a dull moment, and I never saw the ending coming! This is going to be a favorite for all Time for all ages a beautiful fairytale to share with your family and loved ones.

What did you love best about Petrella, the Gillian Princess?

There are not enough books out there like Petrella ! This is a wonderful story - suitable for the pre-teens. Kids will be taken on a journey with a trifle of emotions and portraying Petrella with much strength of character and determination. I would want any child to hear this well written love story.
To all you Moms out there ? Download this audio for your daughter! Well Done Chiara !