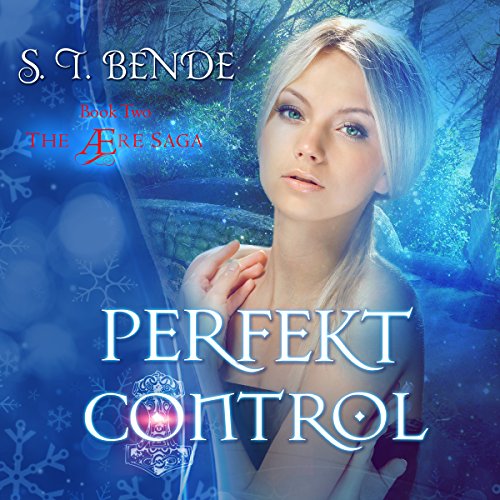 Rule the realms. Brynn Aksel is a valkyrie - a battle goddess tasked with protecting both the God of War and the future of Asgard. She fends off giants and dark elves with an iron fist, a glossy smile, and no less than perfekt control. She's focused one-hundred percent on rising through the valkyrie ranks, and not at all on her lifelong crush on Henrik Andersson - the one guy in all the realms who could be her undoing. Henrik serves as War's other bodyguard, and he's too focused on protecting their shared charge to realize that Brynn's a girl. When an unprecedented surge of darkness abducts the Goddess of Love, Brynn's already-steely focus is singularly directed on her new assignment - accompany Henrik to recover the realms' source of light before the cosmos descends into chaos. While battling demons, dragons, and the not-quite dead, it becomes clear that immortality does not equal invincibility. And when Hel herself puts a hit on Brynn, the valkyrie has to decide if staying in control is worth losing everything for...or if it's time to rule the realms.

What listeners say about Perfekt Control

Takes a little to get into

To be honest at first I was a bit disappointed we were not hearing more about Mia but once it got into the story I started to really enjoy it again. It’s just a shame the last book isn’t available on Audible 😰

I love this book. Brynrick are the perfect pair. This book has it all. Action, adventure, friendship and love. A must read book

great story absolutely loved it funny throughout the little drama lots of Scandinavian snark.
acceptable for youths threw adult narrator was great and he's to follow. can't wait for the next one to come out or three

WoW!
If you love Asgardians and goldens gods this is the series for you!
There is adventure, a strong heroine, and a dashing hero worthy of swooning over.
Though there are no scenes in the books,

They do have a intimate scene a few times and that I did not like.

the series is uninteresting. The story is monotonous and although it explores some kingdoms of Norse mythology, it brings few elements about the subject, that is reduced to scene.
Another annoying point is Brynn and Henrki's relationship. Brynn feeds a platonic love for Henrik, who apparently ignores the fact. Then we jump from platonic love to a strictly professional relationship, based on the duty that each one has with the gods, or rather with the god of war. In the midst of all this, we have the search for the whereabouts of Freya ....
I expected something better, since the first book was more attractive.