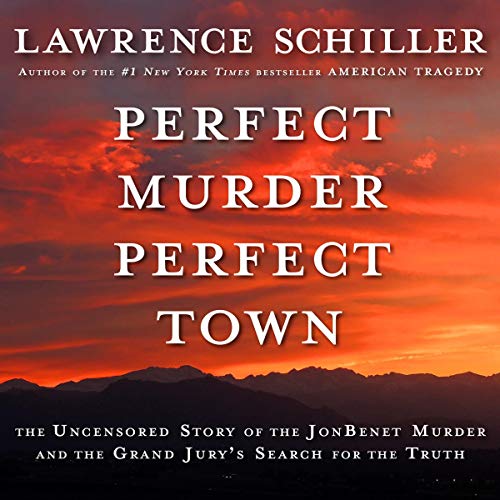 Nothing written about the death of JonBenet Ramsey can possibly prepare the listener for the revelations in this audio. Here, acclaimed writer Lawrence Schiller reveals for the first time the uncensored true story of the events that unfolded on Christmas night of 1996 and the unthinkable damage suffered by a community in the aftermath. This gripping definitive account finally answers the question: What happened in the town of Boulder, Colorado? With meticulous research, attention to detail, and masterful writing, Schiller creates a portrait of an inscrutable family thrust under the spotlight of public suspicion and an affluent, tranquil city torn apart by a crime it was unprepared to deal with.
(P) & ©1999 HarperCollins Publishers, Inc., All Rights Reserved, Harper Audio, A Division of HarperCollins Publishers

This was steaming mess...

What disappointed you about Perfect Murder, Perfect Town?

Wow...talk about a discombobulated mess. This book is all over the place. The narrator is horrible. Extremely hard to keep track of who's who as it keeps skipping from first person to third person to author... Don't wast your money or time on this heaping mess.

Has Perfect Murder, Perfect Town turned you off from other books in this genre?

If you could play editor, what scene or scenes would you have cut from Perfect Murder, Perfect Town?

I would not have let it be published.

Perhaps I wrongly assumed this book would be about JonBenet and the Ramseys... it was significantly more about the politics surrounding Boulder, the police and the DA. In fact, if you counted how many times the name Thomas, or Hanson or even the reporter's name was used, I am sure they would significantly outnumber the times you heard Patsy, John or JonBenet.

This book would inform the listener or the reader just how, not to solve a murder. The Boulder police department was nothing short of a mess. This is the only thing one would conclude. The narration was quite excellent and keep one from fatigue. It seems to me there was the Larry, Moe and Curley scenario throughout. If you don’t have the killer in your grasp and you don’t have a motive, or a real suspect, you aught to say so and stop trying to use the cloche and dagger routine, stop ruining the lives of others, cry uncle and admit you have no suspects.

Lack of educational/entertainment value. I was wishing for more in-depth analysis of the murder and suspects.

If you could sum up Perfect Murder, Perfect Town in three words, what would they be?

Ego versus politics versus assumptions versus lies versus the truth

Yes It is very interesting that even though Schiller never digs deep into the possibilty of the landscaper commiting the murder yet it is the landscaper/yard man that was first mentioned talking to JohnBenet and then again the question that she asked him about the roses mentioned at the end of the book as well.I just wonder if Schiller had his own personal suspitition?? who knows? Nevertheless the book was quite interesting despite the overwhelming internal problems that exist within the Boulder police department and their so called justice system.. I mean this was pathetic that there were so many people that seemed to be more concerned about their personal ego’s than focusing on the objective of getting the job of justice completed.One would hope and expect that if people got paid every day and made a career out of law enforcement,and judicial matters that they can and would be able to A) find out who killed her, B) bring them to justice, C) Carry out a proper trial. As we see now 17 years later that none of this has ever occured nor probably will it ever. This case is doubtless a reflection on Boulder Colorado,their law enforcement, and their judicial system which has failed thier citizens not to mention JohnBenet MIGHTILY
The intense level of inexperience,ignorance,imaturity,is a complete shame.

Interesting but too long

I think there is too much quibbling to explain that the case remained unsolved because the police made faults at the very begining.

On the whole, I enjoyed it.

Do you think Perfect Murder, Perfect Town needs a follow-up book? Why or why not?

I don't think so.

Not well written. Story is really about the probem's with the police and the prosecutor etc.

This book was interesting and told in detail the story of an infamous murder, but I became bogged down in the sheer number of people listed and the roles they had - much as I wouldn't want to detract from their work, I felt this adversely impacted on the narrative.