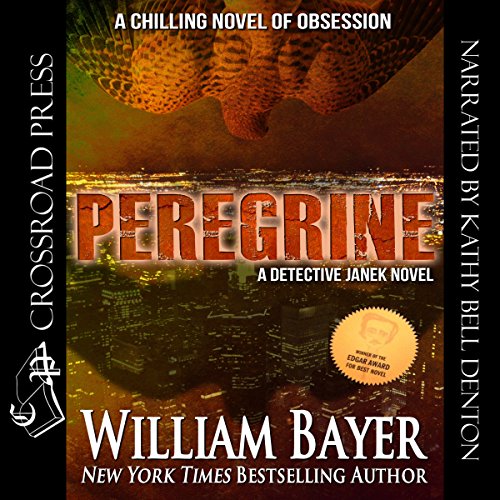 This novel won the Mystery Writers of American Edgar Award for Best Novel.

Circling high over Rockefeller Center is a peregrine falcon, the most awesome of the flying predators. She awaits a signal from her falconer. It is given: The bird attacks, plummeting from the sky at nearly 200 miles an hour, striking a young woman and killing her instantly.

As killing follows killing, the terrified city becomes the backdrop of an extraordinary drama. Police and the media engage in cutthroat competition to find the murderer. Two predator birds are pitted in a fight to the death above Central Park. Call girls, rich eccentrics, striving careerists, dealers in the black market for rare birds - all play their roles in this study of secret passion, desire, fulfillment, and ecstasy. The ancient sport of falconry, in which birds are trained to hunt and kill on command, is the key to the spectacular operatic finale.

For all its excitement and intricate detail, Peregrine is more than a thriller: It is a study of secret passion - desire, fulfillment, ecstasy. In the falconer, in Pam his prey, and in the burnt-out detective who finds in this case a means to his salvation, author William Bayer has created vibrant characters each of whom is both hunter and hunted, each of whom fulfills the others in extraordinary ways.

What listeners say about Peregrine

The fascination of the falcon, the beauty and the speed, and to read about him, and how murder happened. Was well done, and the narration by Kathy keep one to the end. Intriguing and enjoyable. Given audio for my voluntary review

An early 80s Edgar winner from William Bayer and a book with an unusual murder weapon - a peregrine falcon. Enjoyable and exciting upto a point, I think I struggled with a lack of understanding as to why the murderer was killing, despite a decent amount of time spent in his head. When his bird attacks he feels electric and alive. As he increases his attacks and the New York public become panicked and scared, in a great part fuelled by the publicity that he helps engineer through his notes to the TV lady who witnesses and reported on the first attack; he feels sated and omnipotent and in control. Further attacks fuel his fantasies which ever increasingly feature Pam the TV presenter. I understood the perverse sense of satisfaction he felt as his bird did his bidding, but frustratingly I didn't get any clue as to why he felt compelled to go down the particular road he was travelling on.

During the book we spend time in the company of three different characters; the killer himself; Pamela, the struggling TV presenter with a career in the doldrums, that is until she witnesses the first murder and it explodes on an upward trajectory and, after only appearing on the periphery for the early part of the book, Detective Janek.

Inevitably the three protagonists are drawn closer and closer together as the book progresses. Pamela conducts her own enquiries, albeit on behalf of her network and always to fuel the story, into the different aspects of falconry - training, breeding, the sport and its fans and detractors as well as the black market and the leading characters in the pursuit. The killer; by positioning himself closer and closer to Pamela, as an unofficial adviser of sorts to her and her network, given his expertise regarding the peregrine. And lastly Janek, who intersects with Pamela, while trying to control the information her and the TV network release from the killer, while trying to get a handle on him to advance his investigation.

It's a tense and exciting book and it read quite quickly. I liked the setting - New York - who doesn't? The conclusion when we get to it, is a bit strange and weird, but it put to bed most of my concerns. Probably the star of the show though was the bird. His initial attack is breathtaking and he reportedly dives at 150mph, which had me shaking my head - no way. A bit of googling later, 150mph sounds slow as they can get to 220 apparently. WTF!


I reckon I've enjoyed other books from 1981 more than this one though. That said I'll look forward to more from William Bayer in the future, including his other Janek books. I hope he features more prominently in them than he does in this, as he is a little bit absent from a lot of the proceedings.