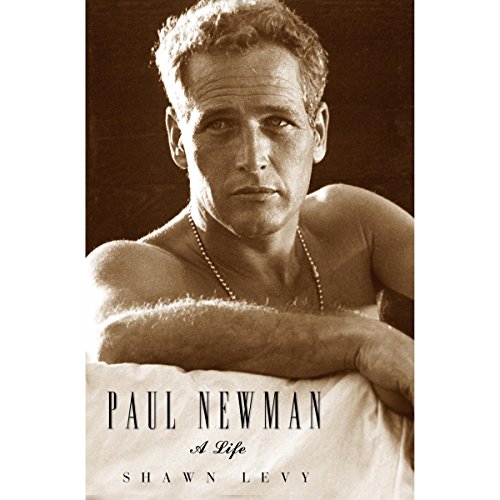 Paul Newman, the Oscar-winning actor with the legendary blue eyes, achieved superstar status by playing charismatic renegades, broken heroes, and winsome antiheroes in such revered films as The Hustler, Cool Hand Luke, Butch Cassidy and the Sundance Kid, The Verdict, The Color of Money, and Nobody's Fool.

But Newman was also an oddity in Hollywood: the rare box-office titan who cared about the craft of acting, the sexy leading man known for the staying power of his marriage, and the humble celebrity who made philanthropy his calling card long before it was cool.

In Paul Newman: A Life, film critic and pop culture historian Shawn Levy gives readers the ultimate behind-the-scenes examination of the actor's life, from his merry pranks on the set to his lasting romance with Joanne Woodward to the devastating impact of his son's death from a drug overdose. This definitive biography is a fascinating portrait of an extraordinarily gifted man who gave back as much as he got out of life and just happened to be one of the most celebrated movie stars of the 20th century.

What listeners say about Paul Newman

What a man! I listen to a lot of biographies and loved hearing the details of Paul Newman's life and learning what a nonconformist he was. It was so captivating that I think I listened to the whole thing in 2 days. Well written and read--the icing on the cake.

the reader is horrible. He mispronounces famous people's names over and over all the time as well as regular English words. and English is his language. he obviously did no research and didn't look up who anyone was or how to pronounce anything correctly

Not Enough About the Movies Newman Was In

Would you try another book from Shawn Levy and/or Marc Cashman?

For 17 hrs worth of listening I would have expected more treatment of the movies that Newman appeared in. In some instances there is barely a paragraph or two discussing such movies as The Long Hot Summer, or Cool Hand Luke. Very disappointing for a movie buff when hardly any of the material focuses on Newman's appearance and performance in these seminal pictures.

Sure, there's plenty of time spent on his personal life, association with The Actor's Studio, his relationship with Joan, etc. But what about his movies! Perhaps I'm spoiled by biographies like the recent John Wayne by Scott Eyman which not only details Wayne's personal life but spent a great deal of time on the pictures that Wayne made, his relationship with the various directors he worked with, and the movie making process. The Wayne biography would spend upwards of 20, 30, or 40 mins on one picture alone. In the Newman bio we're lucky to get 5-10 mins discussion an important film like The Hustler.

Why no in-depth look at the pictures Newman appeared in? Surely more time could have been spent researching & interviewing actors, production staff, directors, and studio execs.

Would you listen to another book narrated by Marc Cashman?

Depends. Not my favorite voice for an audiobook.

Do you think Paul Newman needs a follow-up book? Why or why not?

Not sure what it would be except for a more in-depth rewrite to include details regarding the films that Newman appeared in.

I'm a big Paul Newman fan but I found this book to be a little on the dry side. Reciting movie plots by rote can get tiresome after a while but I did learn a little about the man. Not a bad read but a little disappointing.

Excellent writing about a wonderful American philanthropist...a true hero, if only there were more of us like him

I loved Paul Newman, my favorite actor, since AI was a little girl (I am 70 now). it was great to hang out with him in this way. very good presentation.

There is no way PN's life could have been boring and clinical. It's a shameful accomplishment that the author made it so in this book.
Don't waste your time, money, or Audible point.
Can I get a refund?

What's not to love about Paul Newman

Would you listen to Paul Newman again? Why?

Maybe. His life was very interesting and the relationships he had with people, also made it fun to listen to, but it could have been edited down a bit.

What other book might you compare Paul Newman to and why?

Can't think of one

Nothing extreme, but it did make me laugh and tear up at times.

Good Bio on Paul. A bit surprise there wasn't more about his relationship with
Robert Redford. Thought they were really close and were more involved in each other lives. I think there should have been more about their relationship.

Yes anyone who enjoyed the man & his work will love the stories.

The stories about a very talented good man.

He read it and it seemed like he knew Mr. Newman

This was my first audio book what a way to begin!

considering his brilliant life and attainment, regrettably he should have written and narrated it with the title and sub head - MY LIFE - and screw you all - this book was factual, fast-forward and flat, therefore missing everything he stood for and made him unparalleled in the late 20th. century. this book - while i love modern day biographies - was a huge disappointment.

very detailed but yet lacking

very detailed but yet lacking , was disappointed to not get more info on iconic movies like the hustler and cool hand luke.