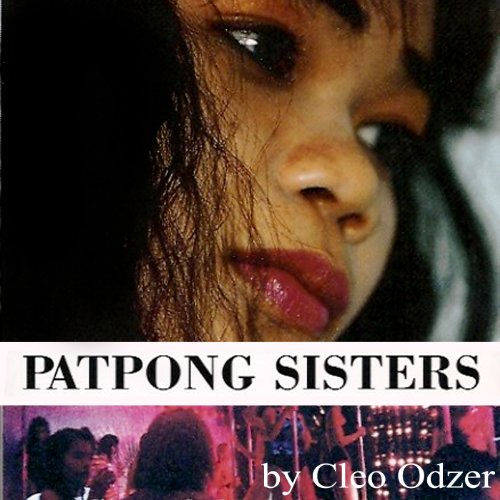 Listeners looking to author and anthropologist Cleo Odzer for academic rigor may come away from Patpong Sisters: An American Woman's View of the Bangkok Sex World disappointed. But for those seeking a more personal, introspective tour of one of the more fascinating and infamous marketplaces in the world will find much to admire in this account of a young American scholar's immersion into some of Thailand's seedier quarters. Performer Amanda Carlin gives a measured and compassionate reading of Odzer's text, evoking a world of danger and heartbreak and illuminating the often surprising insights of this intrepid traveler and author.

Patpong, in the heart of Bangkok, teems with bars and sex shows, catering mainly to farangs - foreigners. Cleo Odzer, a young anthropologist, spent three years studying the area. Gaining the confidence of the bar girls and bar boys, she interviewed them at length, lived among them, accompanied several back to their families in remote villages. She also got to know their customers, those in for a night or in forever (many fell in love and stayed on in Patpong). From Odzer's account emerges a far different picture from the cliched image of the prostitute. Many of the Patpong girls, smart and enterprising, use their profession for self-liberation and to support their impoverished families back home. Warm and personal, Patpong Sisters reveals the truth about the $4 billion Bangkok economy of sex.

What listeners say about Patpong Sisters

An Anthropologist's Adventure in Thailand

This book is an compelling narrative by a 38-year old female graduate student in anthropology whose thesis research covered Patpong--one of Bangkok's most well-known sex districts--in the 1980's. While studying the touts, mama sans, pimps and prostitutes she meets there, she finds herself becoming involved with and falling for two very different Thai men and discovers that experiencing love in any culture can be a convoluted and sometimes tortuous endeavor. Her conclusions about the Thai women who ply their trade in Patpong are surprising yet valid as she compares the poverty a great many of these women and girls come from to the power and relative affluence they derive from their sexual and emotional interactions with foreign men, called farang. At few times, author Cleo Odzer hints about her own life growing up in wild 1960's America, but does not elaborate. However, visiting a few web pages about her, it became apparent that her own life would have made a fascinating book in and of itself. Sadly, Odzer died in 2001 at the age of 50; some say of AIDS. The growing worldwide AIDS epidemic of the 1980's was a forbidden subject in tourist-conscious Thailand and was something Odzer wanted to find out about in her research. Ironically, if she did die of AIDS, her unprotected sexual experiences with the Thai men she writes about in this book may have been the cause of her eventual demise.

The discovery that the lives of many Thai prostitutes were greatly superior to the abject poverty of the peasant village life they came from. In some respects, these women were the most independent women in Thailand--at least in 1988. I would hope that female empowerment has improved in Thailand as business and industrial growth has increased and more people have climbed into the middle class.

Carlin's accents, Thai, Australian, Dutch and others were spot on. Her performance was certainly a highlight of the Audible version of the book.

Prostitution in Thailand is long-standing and only became illegal (although almost entirely ignored) in the 20th century. Yet a significant percentage of the Thai Gross Domestic Income comes from the sex industry. And Western men supply a large portion of that income. Many of these men, however, become thoroughly enchanted by this gentle society and its beautiful, enticing women and decide to stay with the women they've fallen in love with from the go-go bars and massage parlors of Bangkok, Pattaya and Phuket.

More of a Soap Opera than a Woman's View of Bangko

I was in Thailand and Bangkok in the 70's and was very interested in how it evolved and a woman's view of it.
Unfortunately, the author spends half the time relating/moaning a soap opera view of her own sex/romance in her stay.
It definitely interferes with the rest of the book which I quit part way through.

I loved this book. I felt very connected with the author, heading her experiences. I appreciated her honesty. Whilst it is based in the late 80s I think it is still very relevant to the situation today.