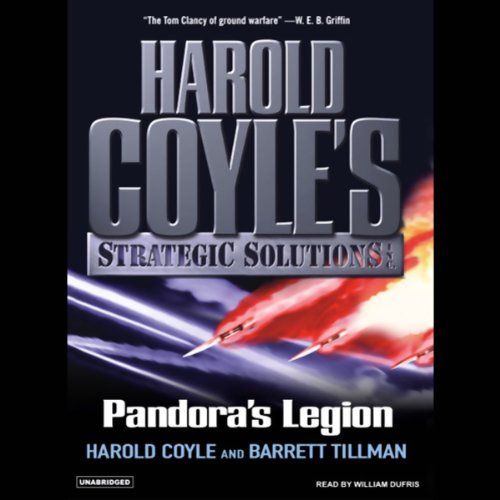 In this explosive new series from New York Times best-seller Harold Coyle and noted military author Barrett Tillman, a new type of war is being fought by private paramilitary companies at the beck and call of the highest bidder. With the military and intelligence agencies spread thin, the US is constantly calling upon the services of these organizations: and Strategic Solutions, Inc., is among the best.

Members of Al-Qaida have set in place a vicious biological attack. Men and women infected with the highly communicable Marburg virus have been sent to major cities and sensitive locations throughout the world in hopes of creating a deadly, global epidemic.

The dedicated men and women of SSI, led by former rear admiral Michael Derringer, are consummate professionals, nearly all ex-police or military, and are the among the best in the world at what they do. But the mastermind behind the living bio-weapons, Dr. Saeed Sharif, is more deadly than anyone could have possibly imagined. Spread throughout the globe and thwarting attacks on their home facilities, the staff at SSI soon find themselves engaged in a frontline game of ground warfare. And to make matters worse, two infected Marburg carriers are heading straight for the United States. Using every resource it has, SSI launches an all-out search for the walking plague carriers before thousands more become infected and die.

Posing a frightening scenario that could become all too real in the near future, and filled with the details of the military world that have made Coyle's books best-sellers, Pandora's Legion hits the front lines of the new war against terrorism in this engrossing, high-stakes novel.

listened to the unabridged audio edition of this book and I found it a fast-paced thriller with an intriguing suspenseful plot. What if a madman decided to use human carriers to deliver a deadly virus to the states? How would the USA respond?

This was a great book with some fun characters. I particularly liked the interaction with the men in the desert and hostage scene early on. I was on the edge of my seat!

Peeves: I did feel the author could've ratcheted up the suspense a bit by actual having a plague outbreak early on. Also, I wish the contagion was something a bit less ewww. The scenes where the disease and its affects were described made me gag. I also wondered, wouldn't the terroris be smarter to release something the carrier was immune to like smallpox? This would widen the impact of the threat and potentially be more devastating.

Overall this was a good novel, look forward to more.

This was more Tillman than Boyle. Ok. Good story. Rolled my eyes many times when it seemed author was trying to hard. Definitely not a Team Yankee.

Very decent storyline but such a reverential tone for the main characters and their approach to life. Certainly engaging and suspenseful with a believable plot. Actor narrator paasably good. Weak on female character voices in general..Beievable plot line and not a waste of time to hear out. Certainly worrisome topic in general to cover.

Don't bother.
This book is not worth your money or time with these one-dimensional characters.

regarding use of "paki" dont ever read tom sawyer or huck finn, i have both used and heard the use of paki as shorthand with no racist overtones whatsoever , such as "yank" "brit" etc. after all its a book and if the author wants to be realistic thats what people say,

a solid good listen - but with major faults!

i quite enjoyed this book. it was well read, however the narrator did the absolute worst british accent i have yet heard on audible! dire and very distracting. Its biggest fault though was the constant use of 'Paki' as an abbreviation for Pakistani. In british english this is highly insulting and its power almost approximates to the N-word. How could the author not know this? this was very jarring and rather spoiled my enjoyment.

However, on a positive side, the world of mercenaries is very interesting. I liked the characters and would like to see them again. overall, good, but with some major flaws.

if it were not for the inadvertent racism and appallingly bad british accent i would give this four, possibly five stars.

I wanted to get into this book but couldn't, English characters portrayed with an extreme pastiche of an English accent interspersed with American pronunciations, Pakistani abrieviated all the way through, maybe acceptable in the states, but jarring to the English ear as is considered insulting and condescending, a nd do the American armed forces really talk to each other like they are Bill and Ted?