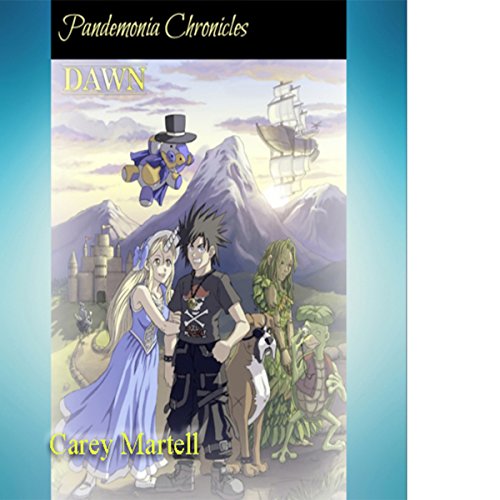 With the aid of a talking teddy bear, a grumpy demon dog, and a unicorn princess who wants to marry him, Gestalt embarks on a journey to stop the Goddess' sinister plot and find a way to get rid of the Demon King - yet, he must also rely on the dark power of the Demon King in order to stand a chance against the powerful minions of the Goddess.

Can Gestalt resist against the corrupting temptations of the Demon King and save the world, rather than destroy it? Is it even possible for a mere human to stand up against the power of a goddess?

What did you love best about Pandemonia Chronicles: DAWN?

I really liked the narration of this book. The narrator did a great job giving all the characters different voices to suit their personalities. It made the book a lot of fun to listen too. It also made the characters very relatable.

Would you recommend Pandemonia Chronicles: DAWN to your friends? Why or why not?

Yes. I think that the friends who enjoy fantasy books would like it.

The scene where Gestalt and his friends are captured by the munchkins.

No I often don't have time to listen to books in one sitting.

I liked the book but I felt that the ending was unfinished. Does Gestalt just stay in the demon world? Does he ever go back to his world? What happens with Ennui? I felt like it just kind of stopped rather than had a proper ending.