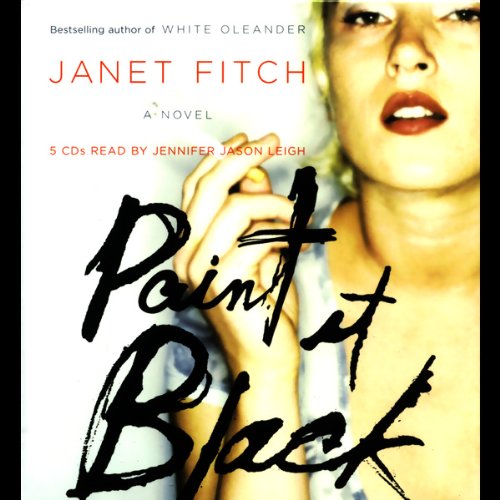 Josie Tyrell, art model, teen runaway, and denizen of L.A.'s 1980s punk-rock scene, finds a chance at real love with art student Michael Faraday. A Harvard dropout and son of a renowned pianist, Michael introduces her to his spiritual quest and a world of sophistication she had never dreamed existed. But when she receives a call from the Los Angeles County coroner, asking her to identify her lover's dead body, her bright dreams all fade to black.

"What happens to a dream when the dreamer is gone?" is the central question of Paint it Black, the story of the aftermath of Michael's suicide and Josie's struggle to hold on to the true world he shared with her. As Josie searches for the key to understanding his death, she finds herself both repelled and attracted to Michael's pianist mother, Meredith, who holds Josie responsible for her son's torment. Soon, the two women find themselves drawn into a twisted relationship reflecting equal parts distrust and blind need.

Passionate, wounded, fiercely alive, Josie Tyrell walks on the brink of her own destruction as she fights to discover the meaning of Michael's death. With the luxurious prose and emotional intensity that are her hallmarks, Janet Fitch has written a spellbinding new novel about love, betrayal, and the possibility of transcendence.

"Masterful....A page-turning psychodrama." (Publishers Weekly)
"A second lushly written, dramatically plotted novel by the author of White Oleander. Once again, the relationship between a powerful older woman and a less-sure younger one drives the story, and Fitch's Los Angeles is so real it breathes." (Atlantic Monthly)

What listeners say about Paint It Black

This is a good story from a fine writer but Jennifer Jason Leigh is the wrong reader. She is a great actress, so I was looking forward to this audiobook and was so diasappointed to hear her droning, flat reading that sounded like she was stoned half the time. She didn't even seem to be concentrating on the text at times, as the expression was off key, like a singer hitting the wrong note of a song. I wouldn't suggest getting this book until the library version comes out (hopefully soon). On the flip side of actress/readers Julie Roberts has an incredible voice on audio and anything read by her is a joy to listen to.

I agree that the narration is very bad. It is slow and boring. And this audio is abridged so it is difficult to follow. Skip it!

I purchased this book because I reallly enjoyed White Oleander and I liked the narrator Jennifer Jason Leigh.
I was extremely disappointed by this one. I have to admit that I only go through the 2nd hour of the 6 plus hours.
The story kept droning on and on....
I don't not recomment this book. Unless you are someone who really enjoys a story that of a character the just goes on and on about how sad and depressed they are.....

The novel tells a sad and intriguing tale... but what really gets you is the prose... the beautiful language, the words that read more like poetry. Pure and real. Tragic story, beautifully told.

In love with this book.

Second time reading. well the first time I read and this time I listened and I loved it so much it is narrated wonderfully. (:

I enjoyed this book, but if you liked White Oleander, don't expect this to be anything like that one. It's a dark and kinky little book.

Read the book, there’s a lot missing in the audio.

I read this book years ago and loved it. I really wasn’t expecting so much of the book to be cut out. Had I not known there were large parts missing, I’d think the book stopped making sense towards the end. There is a lot more of the Josie/Meredith storyline and without it, the audio version just isn’t very good.

Janet Fitch has a way with words. I absolutely love her metaphors, they feed me. This book was not my favorite from her, for I treat White Oleander as my Bible but it was still a good story. Just heavy.

This is Abridged and That's Annoying

I love to read, but I have a short attention span. I tend to drift and miss a lot when I listen to audiobooks on their own and, too often, I get distracted by shiny things when reading books on their own. So, if it's a story that i'm really interested in, I will listen to the audio book and follow along on the audio book. This is particularly the case when I am very interested in the writing style, not just the story. So, imagine my surprise when I'm following along for this book and I keep getting lost, can't figure out where the narrator is. That's when I looked a little closer and realized that the reading is abridged. My fault, I guess, for not reading closer, but Audible doesn't go out of their way to make this obvious. IMO, it should say this next to the title. You're missing a good third of the book when you listen to this. Easily a paragraph on every page and in some instances, entire chapters are missing. Not cool. I'd never have purchased the audiobook if I'd realized. Do better, Audible!

As for the narrator, I was fine with Jennifer Jason Leigh. Her voice matched the way I pictured the protagonist in my head, so I didn't have a problem with her, and I'm super picky about narrators.

All in all, this was ok. I just wish the description was more transparent so I knew what I was getting upfront.

Raw just for the sake of raw

I did not enjoy this story. It was grim and seemed pointless.
i don't recommend it