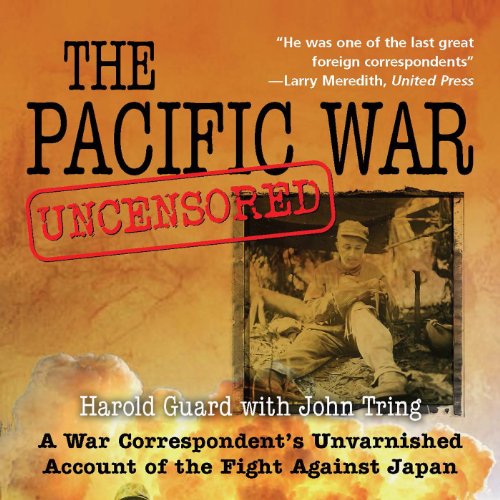 Harold Guard became a war correspondent quite by chance, after he had been invalided out of the navy following a submarine accident. Thereafter, working for United Press, he gained a front row seat to many of the most dramatic battles and events of the century.

In March 1942 Guard arrived in Australia, having narrowly escaped from Japanese forces invading Singapore and Java. His dispatches from that disastrous front prompted one observer to comment on “the crisis days when everybody except Harold Guard was trying to hush up the real situation.” At the time he was acclaimed by the Australian press as being one of the top four newspapermen covering the war in the Pacific.

Over the next three years Guard was to have many more adventures reporting on the Pacific War, including firsthand experience of flying with the US Air Force on 22 bombing missions, camping with Allied forces in the deadly jungles of New Guinea, and taking part in attacks from amphibious landing craft on enemy occupied territory. He also traveled into the undeveloped areas of Australia’s northern territories to report on the construction of the air bases that were being built in preparation for defending the country against the advancing Japanese.

What made Harold Guard’s achievements even more remarkable was that he was disabled, and had to walk with a stiff right leg due to his navy injury. Despite this he often reported from perilous situations at the front line, which gained him considerable notoriety within the newspaper world. Harold Guard always endeavored to give an honest account of what was happening in the war, and this often brought him into conflict with the military censors. He also courted controversy on returning to Britain, when he highlighted the deficiencies of the defensive strategy used by the British government in defending Singapore.

Harold Guard passed away in 1986; however thanks to years of work by his grandson John Tring in assembling his dispatches, private correspondence, telegrams, and audio accounts, the full story of Guard’s experiences and observations during the Pacific War have been constructed. No longer subject to censorship, the starkly honest perceptions of how the Allies nearly failed and at last finally won the war can now be told.

John Tring is to be congratulated for his efforts in giving his Grandfather a new 'voice'.
This is an accessable account that reflects Guard's jounalistic approach, rather than a dry piece of academic history.

My own opinion is the narrator fails to do justice to the text in so important a work.
Where a even a slight pause to indicate a new paragraih or chapter would seem appropriate, the narrative continues. This is most noticeable when there is a shift from actual description of an event to a broader change in activity. For me this did detract from the account. Perhaps this is an editing problem.

I also expect that a considerable amount of material has been omitted, which may be available through UP 's own archives.
Harold Guard's astute observations of events as he actually experienced them is complimented by his similar well reasoned comments regarding some of the high profile people he came in contact with during his postings.
What I most appreciated though was the immediacy of Guard's accounts of events as they were occuring and his reporting style. The descripion of his activity and time as the Japanese pushed through Malaya and Singapore fell, was more poignant for his restraint. This is also true of his reports and observations in New Guinea and Northern and Central Australia.
A small pdf with photos and maps would be a great asset. This is especially so for the aircraft the Air Forces were flying .

I do highly recommend this and suggest also looking at a hard copy.

Interesting and rare experiences of WWII written by a man who lived an interesting life. Harold Guard reveals many previously unknown facts and details in this audiobook. Well narrated too. Definitely worth your time!