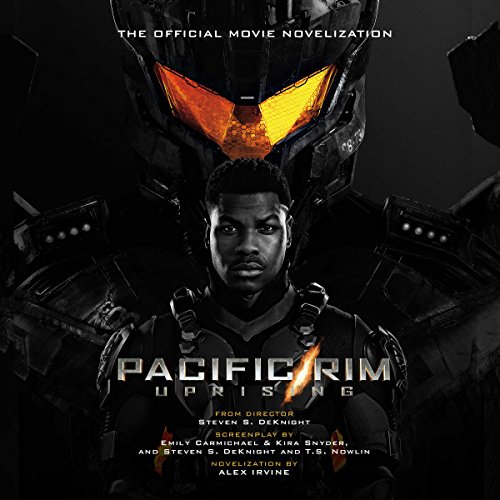 It has been 10 years since the Battle of the Breach and the oceans are still, but restless. Vindicated by the victory at the Breach, the Jaeger program has evolved into the most powerful global defense force in human history. The PPDC now calls upon the best and brightest to rise up and become the next generation of heroes when the Kaiju threat returns.

Much better than I expected

I’ve seen the movie and I didn’t know if I should think much of the book but the book turned out to be much better than the actual film. Very pleased with it it was a good job

the book was terrific, the narrator was amazing and the story was made perfectly, would recommend to anyone

If you love action monster stories!!

And if you love the first movie pacific rim check this out. I think of this a fun quick little ride worth the time it takes.

even better than the movie. you get inside the characters head more. If you love Kaiju this is a fun romp.

The movie was better

I've done a few novelizations before an they usually take there ways of adding tad bits to the story that exoand on worldbuilding or greater plot detail on something but the novel had a lots of bad points.

Fight -Bad when battles it stuck close to the fight scenes from the movie but over simplified them that they last there spark that the movies had.

Memories- Good that the author expanded on the Memories from drifted sections the mivie had by giving more dialog to the events.

News articles- Med they where intresting at the start but annoying real fast has it more just giving facts the listener could figure out themself.

Lots of action, a solid listen ...

I enjoyed this so much that I watched the movie on Amazon, and am happy to say the movie was just about word-for-word with the novel. What I did get out of the audio version was a much better feel for Amara's brave, brash, fun personality ... I'm so pleased that the producers chose Jeffrey Kafer for the narration -- his vocal talent really enhanced this story. His voicings for each of the different personalities and ethnicities added so much depth to the audio experience.

I'm really glad I listened to the audio before I watched the movie. Even though the movie was word-for-word, I pretty much got lost in the visual effects in the movie (kudos there, too) and lost quite a bit of the dialogue in the action scenes due to my fascination with the visuals. In all, this audio is truly excellent.

Good , but I think could have been better . Average overall , especially narrator .

The story is great like a movie but more detail in it. Lead us to the monster world. The tone of audible book is a little flat. But its fine.