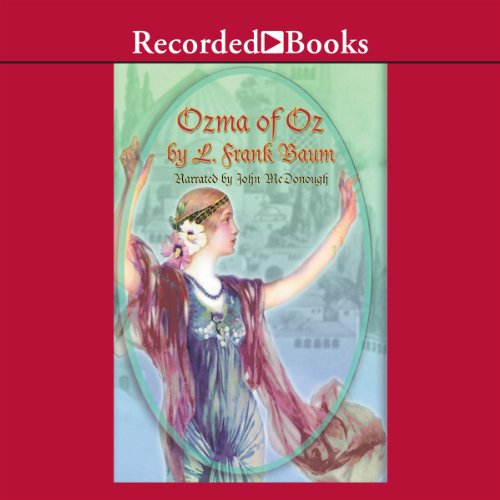 Dorothy Gale, on a voyage at sea, is tossed overboard during a storm. She is washed ashore at Ev, a country neighboring Oz, where she meets up with her old friends the Scarecrow, the Tin Man, and the Cowardly Lion, and meets Ozma, the new Princess of Oz.

What listeners say about Ozma of Oz

A great third entry in the "Oz" saga! This outing reunited some beloved characters while also introducing some memorable new ones. My kids (age 6 & 9) and I have enjoyed listening to all of the books so far, and the ending in the Nome King's Palace is definitely one of our favorites. Mr. McDonough's narration was very enjoyable and brought each character to life.

Ozma of Oz is the third book in L. Frank Baum’s OZ series. We all know what happened in the first book, The Wonderful Wizard of Oz. In the second book, The Marvelous Land of Oz, a boy named Tip accompanied several strange characters on a quest to help restore Princess Ozma to the throne of Oz. Dorothy, who was back in Kansas, didn’t appear in The Marvelous Land of Oz.

Ozma of Oz begins as Dorothy Gale (we didn’t know her last name until now) is with Uncle Henry on a ship heading to Australia. A storm blows up and washes Dorothy over the side. (It seems to me that Dorothy has an uncanny ability to attract deadly storms. Perhaps she should change her last name.) She manages to stay afloat by hanging on to a chicken coop. When they make it to shore, the chicken, who can suddenly talk, explains that her name is Bill, though Dorothy insists on calling her Billina.

Soon it’s clear that Dorothy is again in a magical land and it happens to be the Land of Ev, which borders Oz. There she is attacked by monsters on wheels, meets a mechanical man named Tik-Tok, is imprisoned by a princess who has 30 interchangeable heads, is rescued by Princess Ozma, attempts to rescue the rightful princes and princesses of Ev from the Evil Nome King, is reunited with her friends from The Wonderful Wizard of Oz, and meets some of the characters from The Marvelous Land of Oz. She also learns (for our benefit) what happened to some of our favorite characters from the previous book, such as Jinjur, Jack Pumpkinhead and the Woggle-Bug.

Ozma of Oz is entertaining all the way through and will appeal most to children between 8 and 12 years old. As an adult, I found it silly but charming and often even intelligent and funny:

“I don’t remember that building” said Dorothy. “What is it?”

“That is the College of Art and Athletic Perfection” replied Ozma. “I had it built quite recently, and the Woggle-Bug is its president. It keeps him busy, and the young men who attend the college are no worse off than they were before. You see, in this country are a number of youths who do not like to work, and the college is an excellent place for them.”

I love that Baum’s protagonists are adventurous little girls. I also love his inventive creatures, such as the princess whose personality changes with her appearance. Princess Ozma’s army really made me laugh. The Princess is so adamant about rewarding loyalty with promotions that her army has 26 officers and only one private for all of them to supervise.

The OZ books are light, sweet, and imaginative adventures for younger children. There are several audio versions available because the books are in the public domain. I enjoyed John McDonough’s narration of Ozma of Oz. I would suggest purchasing the free Kindle version at Amazon and then adding the Whispersync audio narration for a couple of dollars.