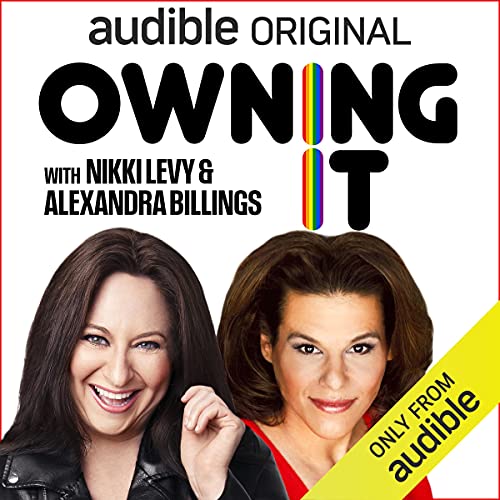 Owning It, produced especially for Pride Month in collaboration with the historic live event and podcast Don’t Tell My Mother!, brings Audible Members a collection of uplifting, raw, and hilarious stories from queer actors, comedians, and personalities. Cohosted by beloved actress and activist Alexandra Billings and storytelling maven Nikki Levy, Owning It is a joyous celebration of LGBTQIA+ stories and icons.

Hear comedian Jen Kober (Dead to Me) detail her hilarious attempt at a summer romance at Jewish camp in the 1980s. Catch RuPaul’s Drag Race winner Bianca Del Rio face her biggest fear at a remodeled Pizza Hut in Wisconsin. Hear Harvey Guillén (What We Do in the Shadows) share the story of digging through the trash – literally – to fund his dreams of becoming an actor. Hear Diona Reasonover (NCIS) describe her dramatic journey to the altar after a lifetime of believing it was impossible. Listen to Transparent star Shakina Nayfack’s tale of coming out…as Christian. And finally, Chase Strangio, the deputy director for transgender justice at the ACLU, tells his story of fighting and winning the first major Supreme Court case for trans rights.

We’ve been inside for over a year. Now it’s time to celebrate.

What listeners say about Owning It

Just binged this, and absolutely loved! The hosts, Nikki & Alexandra, were smart and thoughtful. And the stories of LGBTQ excellence were awesome and inspiring. I loved Jen Kober (I went to Jewish summer camp, too!) and Chase Strangio (I cried at the end of his), but all were fabulous. It's been a hard year. I needed something to feel good about myself and remember that I'm part of a big, strong community. Thanks for a great Friday night.

I laughed, I cried and I learned a lot. Totally worth the time. Happy Pride Month everyone!!!!

Perhaps unfairly I came into this expecting something like the Risk Podcast. Unfortunately this isn’t anywhere near as good. I felt like the stories were bland. In one story literally nothing happened at all, but none were outstanding. And again, maybe I’m just too used to listening to podcasts that are basically the passion projects of the hosts, but the hosts on this seem very scripted... like they’re putting on a show instead of just making what they love.

It’s my yearly dose of Pride!!!!!! LGBTQ 🏳️‍⚧️ 🏳️‍🌈
The host did an immaculate job and thankful to all who shared they’re stories. Amazing human beings ♥️

I really enjoyed this! At under 2 hours long, it was a great listen for an afternoon of hands-on work in the lab. I think this is the third Pride Month special hosted by Nikki Levy for Audible which I have listened to, and in my opinion this is the best one yet! The stories were interesting and fresh, giving insights to how different celebrities on different points in the LGBTQIA+ spectrum own their own identity, and not every story was about coming out as gay to their family and friends. These productions are also podcasts about the past year, so I really appreciated listening to how these folks dealt with the pandemic. I'd definitely recommend to all those celebrating Pride Month 2021.

I didn’t ask for this book!

Just appeared in my library without me even trying to order and is morally questionable at best!