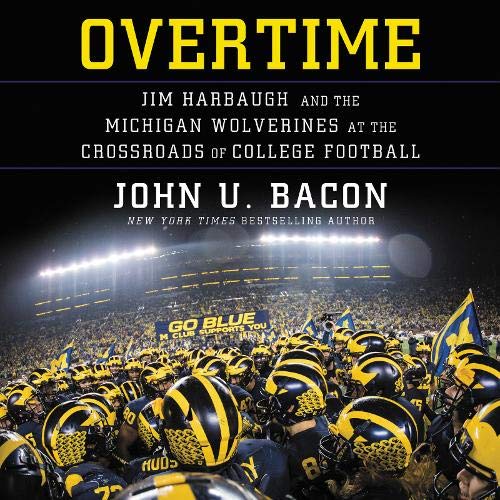 By: John U. Bacon
Narrated by: Johnny Heller

For the past year, John U. Bacon has received unprecedented access to Jim Harbaugh’s University of Michigan football team: coaches, players, and staffers, in closed-door meetings, locker rooms, meals, and classes. Overtime captures this storied program at the crossroads, as the sport’s winningest team battles to reclaim its former glory. But what if the price of success today comes at the cost of your soul? Do you pay it, or compete without compromising?

Overtime delivers a riveting and revealing insider's account of the Harbaugh era, a deeply reported human portrait of a big-time college football program.

In the spirit of HBO’s Hardknocks, Overtime follows the Wolverine coaches, players, and staffers through the 2018 season, including Harbaugh, offensive stars Shea Patterson and Karan Higdon, NFL-ready defensive standouts Rashan Gary, Devin Bush Jr., and Chase Winovich, second-stringers striving to find their place on the team, and their parents’ reactions to it all. Bacon met with them every week during a season that saw the Wolverines ride a 10-game winning streak to number four in the nation, then take a beating at the hands of arch-rival Ohio State, led by controversial coach Urban Meyer, Harbaugh’s foil. Overtime also previews the crucial 2019 campaign ahead.

Above all, this is a human story. In Overtime, we not only discover what these public figures are like behind the scenes, we learn what the experience means to them as they go through it - the trials, the triumphs, and the unexpected answers to a central question: Is it worth it?

From the "poet laureate of Michigan football" (according to New York Times'Joe Drape), and one of the keenest observers of college football, Overtime offers a window into a legendary program and the sport itself that only John U. Bacon could deliver.

What listeners say about Overtime

It was a good book. However it seems like the majority of it was riddled with excuse after excuse as to why Jim Harbaugh could not recruit and win like others. He resorts to calling them cheaters. I mean obviously if he can’t beat them they must be cheating.

Another great Michigan football book from John U.

This is the fourth book I have from John U. Bacon. His ability to get the unknown, valuable insight make his books special. As a long time U of Michigan fan, he brings you more inside, turning back the curtain in to how much they care and value student-athletes values.

I have listen to many audiobooks related to sports, specially about The University of Michigan. I have never felt my heartstrings pulled like with “Overtime”. It is a book that gives you so much insight into an amazing football program, what it takes to run it, the people involved who contribute to the young man that will become a Michigan Man. At many moments I was at awe, I was in tears, I was inspired and at the end I was grateful and humbled for this book. John Bacon, you are a heck of a writer! Go Blue! Carlos A. Marroquin

Only For Michigan Fans, If That

Over the past several months I’ve been listening to all sorts of (mainly) team specific college football books and thoroughly enjoying each of them. I was excited for this book as it was very highly rated, and I’ve always had a soft spot for Michigan as a huge college football fan in Ohio who despises the buckeyes. This book is filled with laughable fan rhetoric and ridiculous excuses. I’ve audibly laughed at several of the points the author so confidently makes. This book takes homer to the new level, but if you’re a Michigan fan who doesn’t really follow the rest of the country, you might like it

I consider this book a squeal to end zone. It an even more personal look into not only the people but the values the university believes in. It tells the story of some players and coaches interspersed with the ups and downs of a season. Adding mire would lessen the reading experience. I almost forgot the narration was perfect.

I’m not a Michigan fan, but love reading John’s books. This is the 2nd if his books that I’ve read and they are both excellent. I have a lot of respect for a Michigan football and the kind of program they run. Really encouraging to read about a school that is doing things the right way and having success at the highest level.

Hail to the Victors

An uplifting story about the heart of Michigan football. From a biased reviewer. Go Blue!

great inside look into Michigan football

great inside look into the 2018 season of Michigan football. 2019 is not looking good and hoping Jim is out

Goes fast, very illuminating stories about the Harbaugh fam, Devin Bush, and other players amidst a disappointing season.