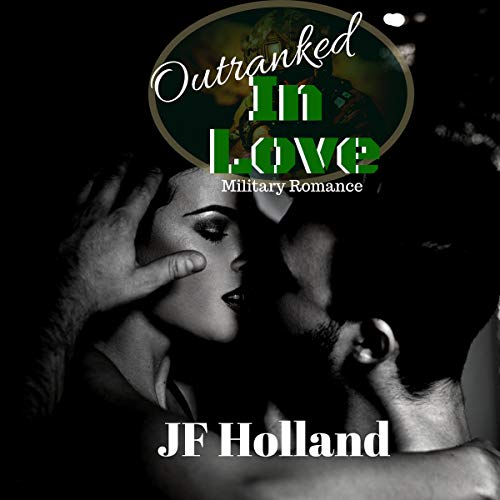 All it took was one incident, and Adam Jones lost not only his mobility, but also his army career.

Adam is attracted to Hannah Summers, but as she's his best friend Phil’s sister, she's out of bounds. Unfortunately, Adam’s feelings for her are no longer clear-cut as lines he shouldn't cross begin to blur.

As Hannah tries to help Adam come to terms with his life-changing injury, confusing dreams taunt him with all that is now out of his reach. Despondent over his losses, Adam sends her away.

Taunted by images Adam's unsure of being fact or fiction, he begins to suspect he's either forgotten something important or else he's losing his mind.

Can he unravel the mystery to what he's missing, or will he lose something even more important to him than his career?

Previously published as part of the Help Our Heroes Charity Anthology; extended for rerelease.

What listeners say about Outranked in Love

this was a really good story. I liked that it had some of the things that our soldiers go thru when and if they return. thank you. please read or listen and review your books

I was a little lost at the beginning but soon caught up with what must have happened before he left on his last deployment. During his deployment he is seriously injured and feels very sorry for himself. She tries to get him to get his head on straight he is limited but not dead kind of thing. This is all very common during war time, the veterans come back broken and feel useless but with good people in their lives they can make it thru. I enjoyed the story very much with the ups and downs associated with an injured warrior. This is not a light hearted story, it will make you sit up and take notice. The narrator did a wonderful job with the characters. I would recommend this story to everyone.

I liked that once Adam got over himself and possible obstacles , he applied himself to getting better and back to his new normal. I liked that Hannah doesn't see him any differently with his disability. They are just a problem to be solved. Good emotional story. I voluntarily listened to a free copy of this and am giving an honest review. The narrator did a great job with voices and expressions bringing it to life.

Sweet love story with some trauma in the back seat.
A woman in love with her brother's best friend. He gets injured and thinks he is no good for her.
There is really nothing new in the recipe for this book.
Even tho I could enjoy the story. The narrator is good and has a nice voice.
The author could step a little out of the box. the story is well written and the characters are well created. I would love to see more from the author. I know she can do it.

This was a sweet read. It was of healing and acceptance. The storyline and the characters were good. The story flowed and was an easy listen. I was gifted this book and this is my voluntary review.

Sergeant Adam Jones has suffered immensely in battle. Now he’s back home and trying to recover or is he? He’s not a ‘whole man’ anymore...why would the girl of his dreams want him? Hannah Summers has loved Adam ever since her brother brought him home when she was a teenager. Can she help Adam adjust to his new normal or will she allow him to push her away?

JF Holland packs quite a punch into such a short span. Following along the rocky and difficult path to their hea, Adam and Hannah are great to get to know. The writing is rich, and engrossing. Lovely story.

Wow, this one got me! It’s a fantastic storyline with such lovely characters. It’s a tough subject but has been written very well. Excellent heartfelt performance from James.

It took a few minutes to come in in the book, but I really enjoyed it and would like to hear more about them. The book could have been longer.

The narrator James Cortes did a good job.

By author JF Holland have I only heard one book before.

I loved listening to the audio version of this book. I was given a free copy by the author in return for an honest review and here it is! This is about an injured soldier that comes home from war and has to learn to move on with his life. It is a romantic, well told story. I found the characters believable and likeable. The narrator told the story beautifully. I look forward to more from this author.

Finding oneself and more

I haven’t read many army romance books. This one is about Adam a injured solider. His memory is sketchy and his leg will never be the same again.

Hannah is the girl he always wanted but never felt like he could have.

Now Adam needs to rebuild his life and Hannah is the one person he needs to see for what she truly is.

true to life must read

Outranked in love follows a tale of one mans struggle after coming back from the war injured and his fight to not only get well but deal with the consequences of the aftermath and how it effects everyone around him.
The story is true to life, heartwarming, steamy in places and a great listen. I really enjoyed it and would say it's my favourite of this authors work that i have read so far.

Outranked in Love by JF Holland is a Military Romance that I listened to on audio narrated by James Cortes.

This is the first book of JF’s that I have read and it definitely won’t be my last. This book made you feel the emotions of an injured solider coming home while being in love with his best friend’s sister.

James did a great job on the narration. I did have to listen to the book at 1.25 – 1.5 speed otherwise it seemed a bit slow on the narration. I really enjoyed James voice and the different tones he used for each character. It made it easy to follow along with the story.

I would recommend this book to anyone who loves Military Romances.