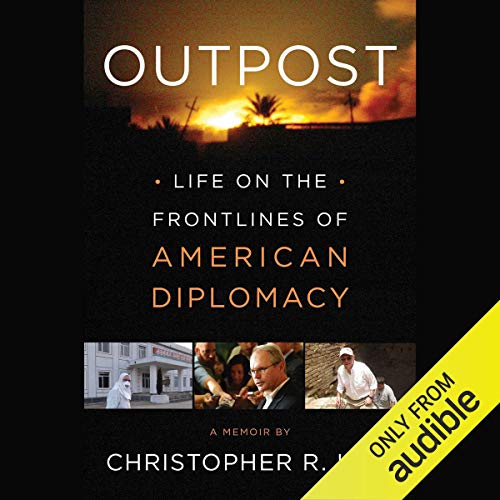 An "inside the room" memoir from one of our most distinguished ambassadors who - in a career of service to the country - was sent to some of the most dangerous outposts of American diplomacy. From the wars in the Balkans to the brutality of North Korea to the endless war in Iraq, this is the real life of an American diplomat. Hill was on the front lines in the Balkans at the breakup of Yugoslavia. He takes us from one-on-one meetings with the dictator Milosevic, to Bosnia and Kosovo, to the Dayton conference, where a truce was brokered. Hill draws upon lessons learned as a Peace Corps volunteer in Cameroon early on in his career and details his prodigious experience as a US ambassador. He was the first American Ambassador to Macedonia; Ambassador to Poland, where he also served in the depth of the cold war; Ambassador to South Korea and chief disarmament negotiator in North Korea; and Hillary Clinton's hand-picked Ambassador to Iraq. Hill's account is an adventure story of danger, loss of comrades, high stakes negotiations, and imperfect options. There are fascinating portraits of war criminals (Mladic, Karadzic), of presidents and vice presidents (Clinton, Bush and Cheney, and Obama), of Secretaries of State (Madeleine Albright, Colin Powell, Condoleezza Rice, and Hillary Clinton), of Secretary of Defense Robert Gates, and of Ambassadors Richard Holbrooke and Lawrence Eagleburger. Hill writes bluntly about the bureaucratic warfare in DC and expresses strong criticism of America's aggressive interventions and wars of choice.

What listeners say about Outpost

The more I read (or Listen) the more I realize how little most of us in America really know about the world outside our borders.

This book is great trip through most of the major international political events of the last three decades from someone who was on the ground talking to the people involved. The book will put you into the rook with Milsovich. It will take you from to the nuclear reactors of North Korea to the roadside bombs in Iraq.

Mostly it provides much needed insight into the nuances of foreign policy and diplomacy never covered in presidential campaigns or debates on the Senate floor.

Great book to learn about the Foreign Service

I am a foreign service officer so I read Hill's book with interest. I recommend it for people who want to learn a bit more about the career, and hear along the way about some pivotal episodes in American diplomacy such as the bombing of Serbia in 1999 and what happened in Macedonia afterwards.

I love memoirs written by those on the front lines of history, such is this book. The American diplomatic corp is interesting, colorful, and professional. And the performance was very good.

This was my second time with the material. I had already read the hard copy a few years ago. The audiobook is just as engaging and the material just as interesting a second time. In the intervening time between reads, I also listened to William Burns’ memoir so it was interesting listening to Outpost with the additional context of another diplomat’s memoir in mind.

This is a great book for any reader who would like to have an inside perspective of US diplomatic service, and its unique connection to changing administration.

Lots of history, very interesting perspective. this book makes me proud to be American. something else we can besides going into war. Thank you Christopher Hill for your memoir.

An I was there view

If your interest is a clear I was there view of tough spots in the world of diplomacy, this is your book. Hill looks back on a singularly difficult series of postings with a clear evaded understanding of what our dominant country can do, should do and in fact does. We aren't Solomon are we?