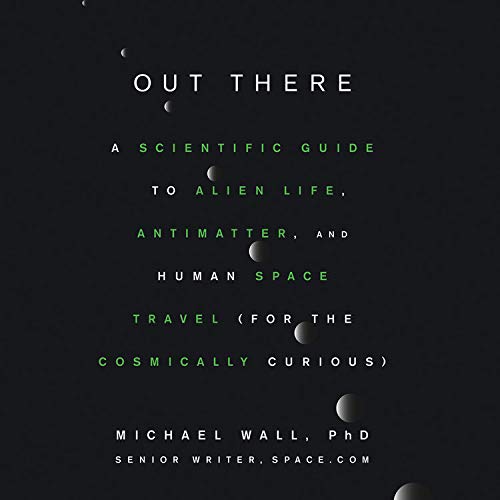 By: Michael Wall
Narrated by: Will Collyer

We've all asked ourselves the question. It's impossible to look up at the stars and NOT think about it: Are we alone in the universe? Books, movies, and television shows proliferate that attempt to answer this question and explore it. In Out There, Space.com senior writer Dr. Michael Wall treats that question as merely the beginning, touching off a wild ride of exploration into the final frontier. He considers, for instance, the myriad of questions that would arise once we do discover life beyond Earth (an eventuality which, top NASA officials told Wall, is only drawing closer). What would the first aliens we meet look like? Would they be little green men or mere microbes? Would they be found on a planet in our own solar system or orbiting a star far, far away? Would they intend to harm us, and if so, how might they do it? And might they already have visited?

Out There is arranged in a simple question-and-answer format. The answers are delivered in Dr. Wall's informal but informative style, which mixes in a healthy dose of humor and pop culture to make big ideas easier to swallow. Dr. Wall covers questions far beyond alien life, venturing into astronomy, physics, and the practical realities of what long-term life might be like for we mere humans in outer space, such as the idea of lunar colonies, and even economic implications. Dr. Wall also shares the insights of some of the leading lights in space exploration today, and shows how the next space age might be brighter than ever.

"Perhaps since the dawn of language, humankind's most profound quest has been to answer the question - 'Are we alone?' Mr. Wall's book takes us on an insightful, engaging, and at times humorous journey through the cosmos, and explains why we may now be on the verge of answering that question!" (Bill Diamond, president and CEO of the SETI Institute)

"This look at some of the key questions of the cosmos and human interactions - it is brain food with flair, and nearly impossible to put down - what a fun ride this book is!" (Alan Stern, principal investigator of NASA's New Horizons Pluto mission and former head of the space agency's Science Mission Directorate)

What listeners say about Out There

Loved the narration. I had to remind myself sometimes that it was a book. It was fun and very informative. Covered a wide variety of space related topics.

Entertaining and funny look at us and all things around us. I enjoyed it a lot

Must read book of the next trillion years

Very well grounded in science. great imagery, and also a bit humorous too. if you read one book in your life, this should be it

great explaination of alien life, from beginning to what might happen in the future, one of the best audiobooks I've listened to

had to stop it after one chapter. obnoxious voice

really difficult to listen to. had to stop after one chapter. content is good. voice performance...very bad. can all books just be read by Bill Kurtis's soothing voice??