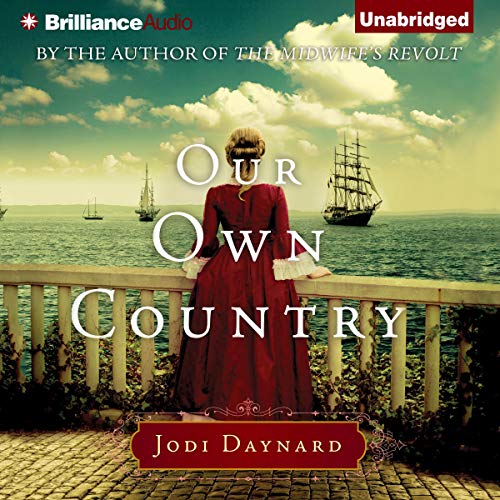 In 1770s Boston, a prosperous merchant's daughter, Eliza Boylston, lives a charmed life - until war breaches the walls of the family estate and forces her to live in a world in which wealth can no longer protect her.

As the chaos of the Revolutionary War tears her family apart, Eliza finds herself drawn to her uncle's slave, John Watkins. Their love leads to her exile in Braintree, Massachusetts, home to radicals John and Abigail Adams and Eliza's midwife sister-in-law, Lizzie Boylston. But even as the uprising takes hold, Eliza can't help but wonder whether a rebel victory will grant her and John the most basic of American rights.

What listeners say about Our Own Country

Love Love LOVE this book. Finally now understand and respect Eliza. She is a hero and a fighter. it opens with her saying once she became bad she was good...so flipping true.

YOU MUST READ THE MIDWIFE'S REVOLT FIRST

I can't wait for the 3rd book from Johnny's POV

I really did not love this book. Although well written, this book is basically a copy of The Midwife's Revolt just told from a different perspective. Sounds like an interesting sequel? I thought so, but was sadly mistaken. The story repeats much of what is told in The Midwife's Revolt just from a different characters viewpoint with not enough change in perspective or details to make it interesting. If I hadn't read The Midwife's Revolt already then I might have enjoyed this book more, but the books are way too similar to enjoy them both as separate entities. If you have read the previous book, then I would skip this one since you already know the whole outcome and details of the story.

I had no intention of listening to "Our Own Country" all in one go (or as much as possible). I've pretty much been on a non-fiction kick for a really, really long time, so a novel just didn't seem like it'd do much for me. Plus, I have "The Midwife's Revolt" but haven't really managed to get around to listening to it, so strike two, right? And then there's the fact that this book seems to be a bit, NOT that there's anything wrong with it, but kind of, Chick Lit-ish (I like Chick Lit, just not in the mood currently).
So how the hell did I manage to listen to Jodi Daynard's new book every chance I got, finishing it, asap? Well, excellent narration was key. Cristina Panfilio, while having rather a girlish voice, really comes through on accents and different intonations; she does a really decent job with men's voices too, nothing awful and gravelly. Jolly good job.
And it really, really helps, to me, at least, that this historical fiction had enough history (kinda light, tho', but enough) thrown in, to keep things interesting. (Loved the references to small pox!)
But I suppose what saves the day is that, while this could and is indeed sometimes predictable, there are enough things that happen that I just didn't see coming. And I haaate relationship dramas with long, drawn out love scenes; I much prefer characters showing their affection in actions rather than in steam.
The ending is rather neat and pat, I would've preferred a bit more struggle, but there you go, that's what was chosen, and if you're into the sweet stuff, you won't be disappointed (I hope that wasn't a spoiler... it's all pretty tidy throughout the book).
I honestly don't know how the book'll play out to non-Caucasians: White woman is ultra-friend to the slave classes, ultimately saves the day, where would we be without her strength?
Still, I obviously found it to be totally engaging enough to rip me away from my beloved non-fiction for a couple of days...! Strong, strong, well-defined, fully fleshed-out women characters; some intricate plot twists and political intrigue; romance galore: what's not to love?

I do recommend it

I really liked the story. It took me about a quarter of the book to get really interested in it. it was adventurous exciting uplifting but at the same time really sad because you realize after over 200 years the fight hasn't changed just the means of it has. and I also really enjoyed the author's note at the end of the book, I had a hunch that some of these characters might be a real and they were so now i have a few more characters to read about. all in all it's an easy Four Star and really worth reading. as far as historical fiction goes this would be on my top 10. the narration was really a plus it made it really easy to listen to the book and enjoy the story , not too emotional or too emotionless just the right amount of emotion in her tone. it was a very masterful and Pleasant narration.

I was disappointed that the author chose to include so much profanity and foul language in this follow-up book. She did not do so in the first "Midwife" book so I don't understand why the choice to use it in this one. It is so easy to use statements such as "he spat out a stream of profanity", or "he cussed a blue streak" rather than to actually expose the reader to the profanity and foul language. Otherwise I really enjoyed the book and it's historical accuracy.

A great follow up to The Midwife's Revolt (MR)

If you could sum up Our Own Country in three words, what would they be?

What other book might you compare Our Own Country to and why?

Besides the MR, America's First Daughter compares. They are strong women and we have forgotten about their kind in that time in history. Also, all three have my new favorite historical lady, Abigail Adams.

I liked her character's voice better in The Midwife's Revolt.

Sequel not a disappointment

At times sequels do not hold the energy and interest level of he first book in the series. However his one did not disappoint. Ms. Daynard maintained her high standard of historical accuracy, character development and captivating plot in this second I her series.
Some sequels spend an inordinate amount of time retell in the first story, but Ms.Daynard handles this as a separate stand alone book, alluding to the other story in ways that the reader isn't bored and yet could read his book on its own.
She depicts customs, dress, mores of the time in such a way as to make the reader feel as if they are in that time and place.

Had promise but towards the end, it went south

The first half of the book was pretty good. Our old friends from the Midwife's Revolt were there and I enjoyed getting to know a different side of Eliza Boylston that we didn't really get to know in the Midwife's Revolt. I did enjoy seeing a softer side to Eliza than the one portrayed in the Midwife's Revolt. I think the story began to get flat maybe 2/3rd's way through the story. Right around this portion of the story I began to wonder if I was replaying a section of the Midwife's Revolt. Maybe it wasn't verbatim, but is sure seemed like it. In any case, I began to get rather bored with the story since I just read about the same thing in the other book. I can't say whether it was because of my boredom I couldn't take much more of the narrator or if she began to drone on in a monotone fashion. Not a total loss of a credit but I'm never that happy when a story loses it's steam and I begin to wish a story would hurry up and end.

I was anticipating this book to be as enjoyable as "Midwifes Revolt". Although it essentially picks up where the other one left off, I found this book lacking and way too long.

good period story, from another perspective.

If you could sum up Our Own Country in three words, what would they be?

I did not enjoy the narrator of this story. This story contains the same characters as The Midwife's Revolt, but told from another characters perspective. The narrator made this story rather unpleasant to listen to.