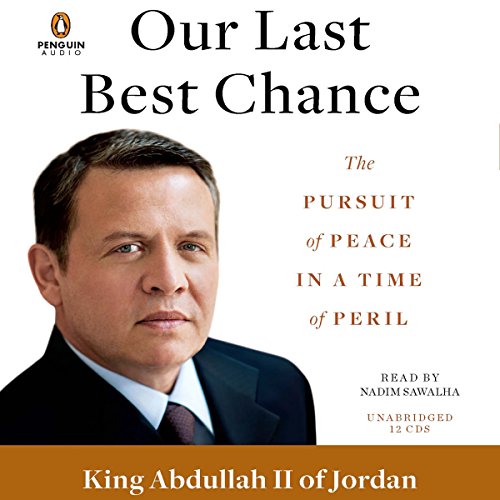 The Pursuit of Peace in a Time of Peril
By: King Abdullah II of Jordan
Narrated by: Nadim Sawalha
Length: 14 hrs and 33 mins
Categories: Biographies & Memoirs, Political Figures
4.5 out of 5 stars 4.5 (2 ratings)

By: King Abdullah II of Jordan
Narrated by: Nadim Sawalha

A news-breaking memoir that tackles head-on the toughest challenge in the world today.

When a dying King Hussein shocked the world by picking his son rather than his brother, the longtime crown prince, to be the next king of Jordan, no one was more surprised than the young head of Special Operations, who discovered his life was in for a major upheaval.

This is the inspirational story of a young prince who went to boarding school in America and military academy in Britain and grew up believing he would be a soldier. Back home, he hunted down terrorists and modernized Jordan's Special Forces. Then, suddenly, he found himself king. Together with his wife, Queen Rania, he transformed what it meant to be a monarch, going undercover to escape the bubble of the court while she became the Muslim world's most passionate advocate of women's rights.

In this exceptionally candid memoir, King Abdullah tackles the single toughest issue he faces head-on - how to solve the Israeli-Palestinian standoff - and reveals himself to be an invaluable intermediary between America and the Arab world. He writes about the impact of the Iraq war on his neighborhood and how best to tackle Iran's nuclear ambitions.

Why would a sitting head of state choose to write about the most explosive issues he faces? King Abdullah does so now because he believes we face a moment of truth: a last chance for peace in the Middle East. The prize is enormous; the cost of failure far greater than we dare imagine.

What listeners say about Our Last Best Chance

I hesitated to buy this book thinking it might be dry & overly political. Far from it! I just could not stop listening. The life & times of Abdullah & his father King Hussein are fascinating. It gives an intimate view of events that have shaped the whole region from those who were part of them. Full honours to Jordanian actor Nadim Sawalha who narrates. He suffuses each phrase with life and keeps the listener enthralled.

Meet the fourth King of Jordan ,

If you could sum up Our Last Best Chance in three words, what would they be?

Unexpected , Instructive and helpful to those willing to listen.

King Abdullah is an unexpected friend to the American people just as his father was before him .He is a king so we don't always get to see the man behind the position. this book gives us a glimpse. allowing us to see a side of H.M. and the middle east we may not have thought about before. H.M. seems to like to share information about his culture. some of the politics can be hard to hear but I think it is worth it and you might better understand why HM. has made some of the choices he has.

Have you listened to any of Nadim Sawalha’s other performances before? How does this one compare?

No I haven't heard any other books, While not his fault if you are not used to a middle eastern accent a few words may be hard to understand. But that too is worth it.

That;s hard to Chose i think it will be different for each reader.

Excellent overview of the king's life, the country (Jordan ), and the overall region. For anyone that wants a great overview of the region that the whole world watches closely yet doesn't quite understand well.

Lessons in history and leadership

This book was a random find in audible's library. The king provides excellent insight and behind-the-scenes facts regarding numerous different geopolitical events that Jordan has been a part of for the last 50 years. Additionally, the king relates his efforts to modernize and find a balance between religion and secularism in his country. There are many stories of how the King has worked to build social and economic institutions in Jordan; as well as, ensure that the bureaucracy performs for its people instead of the other way around. much of the foreign policy focus has to do with the Israeli – Palestinian conflict. Regardless of which side a person might support, the king advocates for a two – state solution, Which he believes will most quickly advance the anti-takfiri (terrorist) efforts. This is a book well worth the listen.

What a brilliant leader

As an American expat living in Jordan, I feel privileged to be in a country with a strong, empathetic, and intelligent leader. His life is a great story, and hearing about all the work he puts in to making peace in the Middle East gives me hope even though the same problems are still around a decade after this book was published. If you want a sense of what the Middle East is like and what a good leader looks like, listen to this book.

Well written, and a great perspective! If every world leader wrote a book on how they see the world through their own experiences, it might be a realistic expectation for world peace at that point!

If you could sum up Our Last Best Chance in three words, what would they be?

Have you listened to any of Nadim Sawalha’s other performances before? How does this one compare?

It opened my eyes

What an incredible book! My whole life, I've been very pro Israel & always looked at all problems in the Middle East as being focused on the destruction of Israel & the Jewish people. I felt I'd been forced to accept that peace in the Middle East was an impossible dream, because I have watched horrific acts of terrorism against Israel & America for most of my 60 years. But this book opened my eyes to a culture & religion I never understood.

A number of years ago, I took our family on a drive down the coast of California, from San Jose to San Luis Obispo. We stopped for breakfast in Carmel & we're told that King Abdullah II of Jordan had been there earlier. Apparently he was on a motorcycle trip. I was surprised. My impression of Arab leaders is they travel in super luxurious private Boeing 747s, basically flying palaces. I couldn't imagine an Arab leader traveling in America like any other American, as well as eating with other Americans. I was told that King Abdullah II was actually a very nice, down to earth guy. For the rest of our trip, I had hoped to run into him with hopes of an opportunity to meet him. I never knew if King Abdullah II actually made that trip at that time or if that was merely a rumor, but this book makes me believe that King Abdullah II of Jordan is a very nice guy with a sincere heart.

Like a kid who still believes in Santa Claus, I wish I could meet & share a conversation with King Abdullah II. This is strange for me as I have zero attraction to meeting celebrities or sitting down to have a conversation with any other world leaders. I think the attraction of King Abdullah II is that he's a very nice & sincere man AND I believe he is driven more towards peace in the Middle East than any other leader in the world.

I highly recommend this book for all, but most especially for Americans & Israelis. It's time for all of us to learn a different perspective. It is the only way peace can be achieved.

Excellent presentation of the Arab viewpoint

Not as king-like as his father, Junior's self-serving portrait is not about solving Middle Eastern conflicts as it is to bolster his image while perpetuating the narrow mindedness which promotes these conflicts in the first place. To Junior, the Palestinians are always right, and the evil Israelis are always wrong. I expected more.