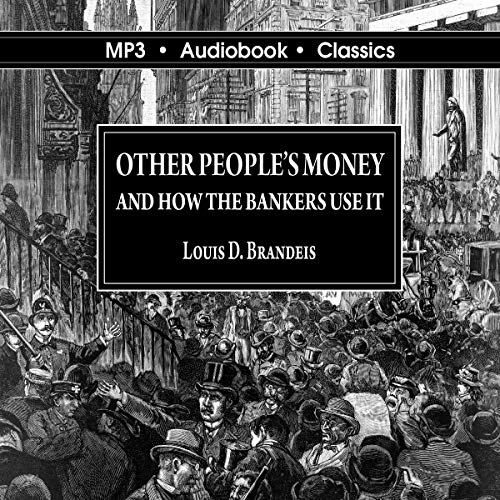 Other People’s Money and How the Bankers Use It is a collection of essays by Louis D. Brandeis that first appeared in Harper’s Weekly between November 22, 1913 and January 17, 1914 and published in book form in 1914.

Other People’s Money takes to task the small cadre of investment bankers led by J.P. Morgan & Co. and known as the “Money Trust”, who would treat an ordinary person’s money on deposit as their own to use to control the banks, trusts, life insurance companies, and public service and industrial corporations that dominated American business.

Brandeis marshaled an exhaustive amount of detailed research to describe the exact extent of the holdings, the interlocking directorships, the interdependence and the resulting degree of control. In doing so he exposes the principles and practices that stifle competition and lead to self-dealing and excessive enrichment.

He explains clearly how they inhibit creativity and progress, foster inefficiency, and go against the grain of fundamental ideas of liberty crucial to America’s identity. His book is a warning and an analysis of the dangers to society when a small percentage of people control the yeoman’s portion of the wealth.

The consolidation of production and distribution in too few hands is a recipe for oligarchy, and no republic or democracy can thrive when it allows for such an entitled, favored, exempt and all but immune aristocracy whose bloodlines are bank accounts and whose manners are defined solely by what the markets allow. His warnings reverberate eerily today in light of the practices that so damaged the American economy in 2008.

At times one feels that nothing much has changed except the decimal points in the numbers. Viewed in this light, Brandeis’ writing has never been more relevant, more prophetic, or more on-point.