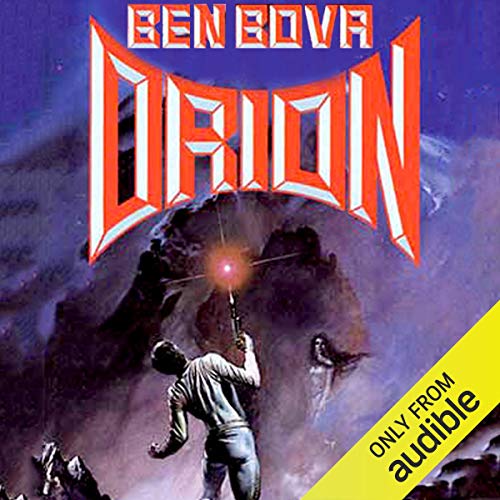 John O'Ryan is not a god...not exactly. He is an eternal warrior destined to combat the Dark Lord through all time for dominion of the Earth. Follow him, servant of a great race, as he battles his enemy down the halls of time, from the caves of our ancestors to the final confrontation under the hammer of nuclear annihilation.

What listeners say about Orion

Orion is man made more than a man, as he is given superhuman abilities to act as a warrior avatar in the conflict between one god, and another supposedly dark god Ahriman.

His life is lived as he is sent to various periods throughout time, and he quickly has to learn to live and adapt here, as well as overcome Ahriman's influence.

PS
Basically the first book has a finished a story, so it was a long time before I read the second book, but as i found out the second book is even better.

Maybe this book just hit me at the right time, but I had a lot of fun with this one. I think the testament of a good book is one that makes you crave for more. And I certainly will get the sequel to Orien.

This novel is about the creation of civilizations, Gods, and men in a journey through space and time. The protagonist, Orion, has been created in the form of a man and is warrior/hero for the human race. He also is not quite human. He has been given intelligence with the ability to process events faster (quicker reactions) and is able to control all his bodily functions. He can still die like normal men, but with the help of a God like being he rises time and time again with the purpose to save human kind from total destruction. Ahriman is Orien's nemesis whom he pursues across time to kill. Orien starts from the future and goes backwards in his encounters. Unlike Orien, Ahriman travels the normal direction of time plotting all the while the destruction of space time and the universe. The effect is that Orien does not know who he is and what he can do at the very beginning and becomes more knowledgable about his purpose every jump back in time.

The settings and landscapes will change as Orien goes back in time and we get to see a lot of different era's and technological capabilities of man. If you study history and like science fiction this series might be a fun fit. Time travel is always tricky to deal with and explain off. I felt Ben Bova did a great job keeping the reader engaged in the story and less with the mechanics. However, we do get some explanation that time is very fluid and events can change either direction in time you follow. The answers to questions like who is Ariman, why he wants to destroy the human race, and who/what Orien is are slowly answered throughout the tale with each era they travel. You may even find yourself thinking differently about Orien and his mission by the end of the novel.

If Sheldon from the Big Bang Theory was to write a comic book, this would be it. This is the combination of Super Hero, Mythology, Physics, Beast Master, Historical Fiction, Yogi, Sci-Fi, Military Sci-Fi and Time Travel. Sometimes it works and sometimes it does not.

The book is broke into four parts and an epilogue. Each part is a different time in history. Our hero starts in the future and is living backwards in time. If you like books about living backwards in time, you may want to check out Piers Anthony's, Bearing An Hourglass. Our hero is similar to Orson Scott Card's, Alvin, as he can control all of his bodily functions, such as heart rate, etc. The first part I thought at the time was dumb and I did not think I would finish the book. Later I realized that the first part is necessary to the story. The characters all seem cliche, but this changes as the story goes. At times I was not even sure who was the bad guy and who was the good guy.

The second part I enjoyed more as our main character spends time with the Mongols. If you like this part you will really like Conn Iggulden's, Genghis Trilogy. Then we spend time with prehistoric man, a reminder of Jean Auel's Cave Man series. Then we go to a weirder time, which I will not explain, so as not to ruin the story. Part of it is suppose to be a surprise, which most people will have already figured out.

There is some talk on evolution, fusion power and why man kills. Ben Bova seems to be one of the few writers in favor of nuclear power, which I liked just simply because it is different from the norm.

I liked parts two and three, but was not crazy about all the rest and as a whole it was just so, so. I might listen to some of the rest in the series if they are on sale.

This is a good light read, that's easy to listen to while you work. I wouldn't call this hard sci fi, I'd call it borderline fantasy. The story has some nice plot twists and an interesting plot. There's nothing earth shattering here, just a good light read.

Just wanted to write this review to alert prospective buyers that while the narration is very good, the sound quality certainly isn't. The sound is of low, metallic quality. A real pity considering I really like the narrator's voice.

Murder has been committed.

The narrator killed one of my favorite books . Slow , tedious reading with no inflection of voice at all . Poor Orion , doomed to cross worlds with this guy reading his story .

While the story flowed reasonably, and was somewhat interesting, the overall plot was simplistic and a little too flawed for my tastes. I did listen to the end and appreciate what Bova was trying to say, and I do like the message and philosophical questions. Probably aimed at a younger audience.

Cool concept, but get rather boring at times

Not a bad listen, good narrator.
The story unfolds in stages, but sometimes Ben takes way too much time building the world (earth at various stages in time) and the story gets boring until the next "event".

I have read this book a couple times since the late '80s and it has never become stale. Now that I can hear it, I am in heaven. The fact that I can listen to the entire series is more than I could have hoped for.
Ben Bova has given us so many new ideas and the possibilities are inifinite. Just imagine what if...

If you enjoy using your imagination then this is a fantastic fantastical series. Very well orated, timeless concepts, surprising that the first book in the series was written in the 80's - amazing foresight.

My favourite book of all time wonderfully read

It's my favourite book, I read it done 20 years ago and it was amazing to relive it in audio, the narrator was amazing.