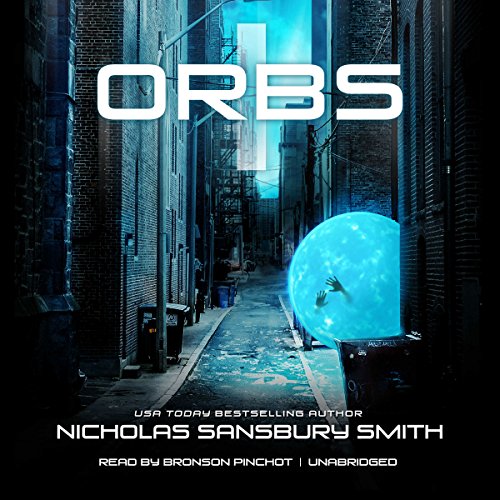 At the end of the world, who will survive?

The year is 2061, and the planet is dying. Cataclysmic solar storms have forced leaders from around the world to finally put aside their differences and agree on one thing-to jump ship. The human race is headed to Mars.

Dr. Sophie Winston is hired by New Tech Corporation to test a biosphere deep within the heart of Cheyenne Mountain; a mission she believes will help prepare the company for the three-year flight to the red planet. But, just days into the assignment, things start to go wrong. When the blast doors hiss open, Winston's team finds a changed world outside. Humans are gone, vanished without a trace, and they aren't the only thing missing. The planet's water has disappeared, too.

As the team explores their surroundings, they find thousands of luminous blue orbs lining the streets. It isn't until they uncover what's inside that they realize the nightmare that lies ahead.

What listeners say about Orbs

Well paced and decent character development. Narration is excellent . Will definitely go to next book

I'm not entirely sure why I waited so long to listen to the ORBS series, I love Hell Divers. This is fantastic end of the world action and adventure. I love it when authors create female characters that are tough & smart leaders. Bronson Pinchot is amazing as the narrator, I may have to find other books he's read because his voices & narration are so good. If you love end of the world fiction, start reading. You won't be disappointing.

Good start to the series!

I love this author and have read/listened to everything but this series. I really liked the first book and look forward to starting the 2nd as soon as possible.

I listened to all of Nicholas’s books but held off to do Orbs in a marathon read!! OMG this book kept me on the edge of the seat. I had to start listening at home as well because I was driving too slow and wanting to be in the car all day. Bronson Pinchot knows how to bring the story to life with his Narration!!

It's actually one of the better alien invasion books i have read. It flows well is descriptive and we'll written

Kept me hanging on

Would you listen to Orbs again? Why?

Yes, because my husband hasn’t heard it yet and I would love to share it with him.

It was a fast-paced ride through a post-apocalyptic world that I found fascinating.

What does Bronson Pinchot bring to the story that you wouldn’t experience if you just read the book?

I enjoy his voice and vocal inflections.

Yes, it regularly got my pulse racing.

I stumbled upon Nicholas Smith’s Orbs series while searching for the caliber of storytelling that keeps you glued to your seat. Orbs is a plot driven, alien invasion thriller with layers of conflict and tension that does not let up. I can’t wait to dive into the next story in the series!

Loved the new narration by Bronson Pinchot. The Orbs series was my first NSS story and I've been binge listening to the first 3 to prepare for the release of book 4: Exodus.
If you like alien invasion science fiction this is a great and unique take on the genre. Action, mystery, and an interesting premise. I have been consumed with these audiobooks for the past 24 hours.

Glad this has been released again I’m ahuge NSS fan but I could not get past the old narrator for the series..Now I can finally enjoy this gem..

Awesome start to a series

Great set up to the series, lots of interesting questions raised that make me want to read the next installment right away. This is a scary and desolate world where hope is in short supply, but the characters fight to find a solution despite that. I can’t help but like the characters and hope they find a way to survive and win, but I honestly don’t see it as things stand. I’m anxiously awaiting what comes next. The narration just made the story even better.

The narrator keeps shouting. Almost gave me a heart attack in the middle of the night. Terrible recording . 0/10.

I chose this title having read the previous reviews thinking it would be a good read. Unfortunately I found the story to be laboured and predictable. I only completed the book as once I start a book I force myself to finish it. I will not be reading anymore in this series

Story line sounded good but couldn’t listen to the mixed half male half female voice. Worst narration to date a waist of money buying it. First review from me that’s how bad it was. Possibly just me but listen to sample before buying

Let me get two things addressed first I like Nicholas Sansbury Smith’s Extinction Cycle and The Trackers Series I’ve listened to 20mins of the Hell Divers and still have the rest to listen to. The second thing is the narrator Bronson Pinchot does his usual super job with the narration.

I know it’s a series of books but to read or watch a second and subsequent series you need to care about the people who are in it. I finished this book this morning and can only remember a few names. There is no real explanation for anything. NSS did his research for Trackers and the use of EMP devices. This seems almost like a ghost writer or in the style of than his others. Personally I won’t be listening to the next

I just loved it

what's not to love about this fast paced story?

Living through the ending of the world

Another great series from my favourite author, well read by a professional who acts his way through the reading in great form.

Can't wait to find out what happens.

Loved this book, fast moving and action packed, characters you can relate too!!
Looking forward to book 2