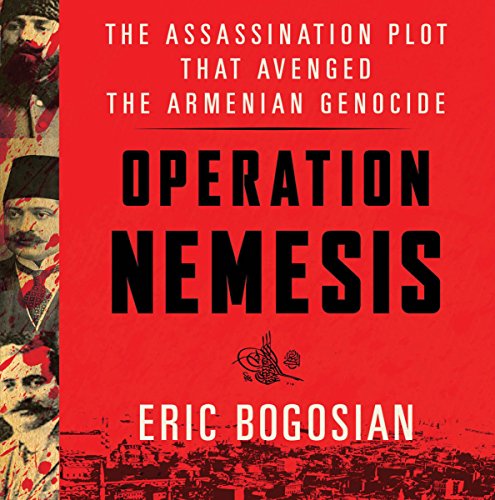 The Assassination Plot That Avenged the Armenian Genocide
By: Eric Bogosian
Narrated by: Eric Bogosian
Length: 11 hrs and 7 mins
Categories: History, European
4.5 out of 5 stars 4.5 (2 ratings)

A masterful account of the conspiracy of assassins that hunted down the perpetrators of a genocide.

In 1921 a small group of self-appointed patriots set out to avenge the deaths of almost one million victims of the Armenian Genocide. They named their operation Nemesis after the Greek goddess of retribution. Over several years the men tracked down and assassinated former Turkish leaders. The story of this secret operation has never been fully told until now.

Eric Bogosian goes beyond simply telling the story of this cadre of Armenian assassins to set the killings in context by providing a summation of Ottoman and Armenian history as well as the history of the genocide itself. Casting fresh light on one of the great crimes of the 20th century and one of history's most remarkable acts of political retribution, and drawing upon years of new research across multiple continents, Nemesis is both a riveting listen and a profound examination of evil, revenge, and the costs of violence.

This was well told and meticulously researched story about a period in history that the human race should not ever forget. While as the author correctly points out the British were responsible for the first concentration camps (employed by Lord Kitchner during the Boer War), modern genocide did not exist until the Ottomans nearly exterminated the Armenian people. While I was aware that when he launched his genocide against the Jews during World War II, Adolph Hitler used as a rallying cry "After all who remembers the Armenians", I was not aware that several key future Nazi officials were part of the German mission to the Ottoman Empire in World War I and actually knew about and in some cases witnessed the atrocities. As the author points out, Hitler's Final Solution probably found its genesis in the Armenian Genocide.

The book does a great job of sketching a history of the Armenia people and how the Young Turk Triumvirate of Enver, Talat and Djemal with their confederates tried to completely eliminate them; and also how Operation Nemesis was conceived as a way of killing those who were responsible for the genocide. I also find it interesting that to this day, the Turkish still refuses to accept responsibility for what the Ottomans did.

The narration was very good and when I finished the book I knew a great deal more about this period of history than I knew before. I would also recommend that after listening to this recording that listeners consider purchasing the Fall of the Ottomans, by Eugene Rogan which is also available through Audible.

Eric should make this in to a movie

What did you love best about Operation Nemesis?

It's an unknown chapter in world history and you would believe it unless you heard it.

What was one of the most memorable moments of Operation Nemesis?

The moral questions will keep you thinking for a while after. What would you do if your people were killed so coldly and the world mostly ignored it. Was it right to act. Those questions remain very topical

Off course he killed it

The Author/narrator tells us this excellent volume started out as the idea for a movie, but due to his many questions; became a seven year project. Well researched and presented with clarity; he leads us through the many layers of the most denied atrocities of the 20th century and the secret plan to avenge them. I have read some of the source material, and can tell you that his treatment of this subject is very comprehensive and reasoned; presenting the many sides of the Turkish dealings with the "Armenian Problem' and the varied sides of the Armenian response to Operation Nemesis and factions within the Armenian diaspora as to the cause/effect as well.
When you hear the depth and breadth of the unspeakable acts of inhumanity that prompted Operation Nemesis; along with the constant, shifting political winds that prevented the "Nuremberg' that it deserved, it gives needed perspective to the operation.
This year is the 100th anniversary of the start of the Armenian Genocide, and Turkey has continued to deny, but using source material from the time, independent and corroborated, gives us all we need. Those of us, like Bogosian, who had family that suffered at the hands of the Turks also know the truth. They lost everything they had, family, homes, businesses, escaping only with their lives, forced to leave the life they knew; so many were deceived and ultimately killed, just for being Armenian.
Bogosian has put together new material regarding Nemesis, woven this into the historical and political realities of the time, then bringing us up to present times creating a new go-to history of this horrendous crime against the Armenian people.
As to his narration; the performance was excellent, he is a gifted narrator.

As an Armenian American and the grandson of Genocide survivors I found this to be a fascinating story of both the events leading up to 1915 as well as the history leading up to the Genocide and the aftermath. My families story came from the survivor's who were peasants from Anatolia and frankly I don't think they cared about the real politic of the events. I also am a big fan of Eric Bogosian, although if you have never listened to his own stories be for warned the content is slightly different :) . What I especially like about this book was the history and Bogosian's recognition of the moral ambiguity of revenge and murder.. As someone who was raised with the "turk" being the personification of evil, and trust me I believe evil was done, it is still a slippery slide to decide whose freedom fighters are terrorist's and who are simply freedom fighters. It is hard for me not to feel some vindication about what Bogosian chronicles BUT I appreciate his own recognition of the moral questions involved.

A must read because we can't forget!

This is a must read because we all need to remember what happened to the Armenians. The genocide of any single people group is horrific and we need to acknowledge this heinous loss of life! I can not imagine the pain the Armenians experienced as the Christians in Armenia were tortured and slaughtered.

Fantastic storytelling. Captivating. Will open your eyes to a story the world needs to know. One of my favorite books of the year.

Fabulous story, narrated by the author…

Eric Bogosian has written the most detailed account of the Armenian Genocide and I cannot think of a better voice for narration than the author himself.

This book is a must read for virtually everyone.

An important history that must be shared. The world has many injustices, this is one that many people had to right.

Sobering but uplifting tale. I didn't know about any of these things before now. Good listen.

For someone who claims to have researched this subject for 7 years, I feel sorry for the author to have wasted so may years of his life that he can never get back.

Not only does this book read like fiction, the conclusions the story writer give are confusing. I guess this is what happens when you smoke pot your whole adult life, writing comedy. I say this as one of Bogosian's interviews regarding this book he admits to the host/moderator of the event that he is a life-long pot user and even jokes about it.

Although I tried to listen to Eric Bogosian's performance of his fictional version of Operation Nemesis, I was getting frustrated as to try to figure out, who is this "Ted Learian" guy he kept mentioning? I know that according to the real history of Operation Nemesis, it was run by a man named Shahan Natalie, and the assassin who Natalie brought in at almost the last minute after locating Talaat Pasah, was a name named Soghomon Tehlirian, who at the time was NOT a member of the Armenian Revolutionary Federation, as Bogosian claims. If that's the case, then who is this Ted Learian guy? Was the unsung hero? The other guy directing Tehlirian? Maybe Learian was the Dashnag that actually ran the operation, the Wizard behind the curtain? Or was he just another figment of Bogosian's imagination, as was most of what he wrote in this fictional version of Operation Nemesis?

All I can say is that I wasted 11+ hours of my life that I can never get back and so will you if you listen to this claimed to be real never before told version of this important event in history that changed the world. This story of good vs evil. The modern day story of David and Goliath. This is the story that everyone should learn so it is not repeated, but not the Bogosian fictional version.

BTW, there is a very interesting and revealing admission from Bogosian that in fact he got this story wrong. This took place at the Hammer Museum on October 14, 2015, when Bogosian was confronted by the grandson of the above named mastermind of the operation. Clearly with such an admittance of his mistake, and then not taking up the offer made by the grandson of Shahan Natalie, you have to wonder why he would then go on to pitch is fiction to the studios to make a movie. He even pitched it to Shahan Natalie's godson and grand-nephew, as well as to the interdependently financed movie company, Alcon, who wanted to buy his fiction, but due to Bogosian's ego and demand that he would have to be the writer of the script, the deal fell flat. At all this after Bogosian assuring Natalie's grandson he had no aspirations to make a movie.

The video admission can be found at the 1 hour and 14 minute point of this video. https://hammer.ucla.edu/programs-events/2015/10/eric-bogosian-the-trail-of-the-armenian-genocide

Captivating story of RAF(Revolutionary Armenian Federation) operatives who avanged the Armenian Genocide by killing the ones who were responsible. Book also sheds an insight to Armenian genocide from different angles, besides it provides interesting insight of Western powers and their stand while attrocities were commited. Last thing I would like to mention is that the book mainly tells Sogomon Tehlerian story in detail. I really enjoyed it.