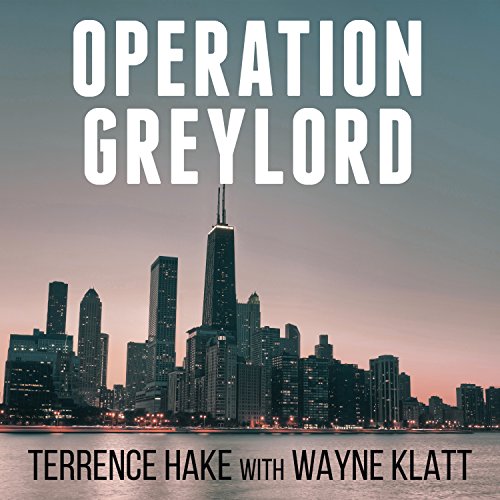 Operation Greylord was the longest and most successful undercover investigation in FBI history, and the largest corruption bust ever in the US. It resulted in bribery and tax charges against 103 judges, lawyers, and other court personnel, and, eventually, more than 70 indictments. And it was led by Terrence Hake, a young assistant prosecutor in the Cook County State's Attorney's Office in Chicago, who worked undercover for nearly four years, accepting bribes, making payoffs, wearing a wire in bars and to racetracks, bugging a judge's chambers, and befriending people he knew he would betray.

"True crime narratives don't get much more suspenseful than Hake's account of his covert work to expose the endemic corruption in the Chicago court system." ( Publishers Weekly)

What listeners say about Operation Greylord

It's exciting and suspenseful. Also it has historical importance. It was the first time investigators were allowed to bug the chambers of high-level judges. Until then, there was no way to get at them. The man who did this was the same man who wrote the book: Terrance Hake. And he was an amateur! He knew nothing about how to go undercover to ferret out corruption. His life was at stake. He learned as he went along. And as a result, something like 100 judges and lawyers and other court officers were arrested, indicted, and spent jail time.

Aside from the fact that this book is so historically interesting, it's also hard to put down because it's so exciting. Danger is everywhere. Until the end, you didn't really know if the good guys (the FBI and other agencies) will win or not. Also there are surprises thrown at you, which I won't mention because it would spoil your enjoyment of the story.

What does Charles Constant bring to the story that you wouldn’t experience if you just read the book?

Constant is a hell of a good narrator. He knows how to build suspense with his delivery when it's appropriate, and how to create interesting characters with his voicings. Also, you can tell the difference between the various characters because of his skill with different vocal nuances. I did read the printed book first, and this Audible version adds so much more. It's like getting twice the enjoyment out of a single book.

I've listened to this narrator Charles Constant before, and he's always good, with both fiction and non-fiction. But IMHO I especially love to hear him read historical material. His narration of the Bismark book was first class. And in this Greylord book too, he knows when to give drama to a scene, without being melodramatic. Not all narrators can do this.

A man of courage A true hero

FBI Agent Terrence Hake saw corruption and he went after it. The good bad and ugly and how it affected his life. Amazing story.

Finally corruption displayed for all to experience

Loved the book, very enlightening. Says another about Illnois ranking judiciary near history that resounds.

I love how hake's story is gripping and heartbreaking for those that got away with such light sentences. It always makes me angry when I listen to how he was mistreated by the defence lawyers during the trials. But he came out of it in the end!

This story is so crazy if it was a movie no one would believe it. A must listen!

Return book very slow no excitement whatsoever. I'm sure if you were in law inforcement maybe

A good story for a newspaper column but not gripping enough for a book. You get the gist early on in the book and it just becomes duller and duller.... please let this end I thought with more than half the book remaining