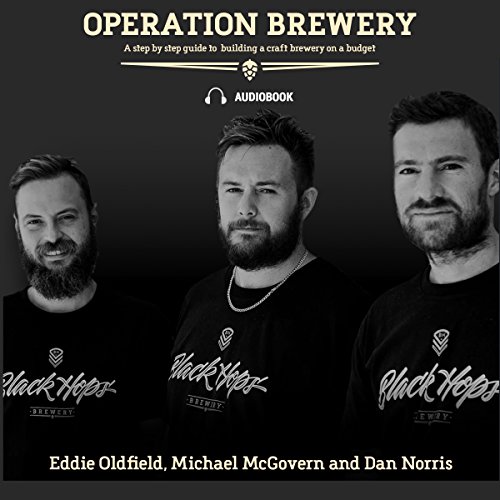 A Step-by-Step Guide to Building a Brewery on a Budget
By: Dan Norris, Eddie Oldfield, Mike McGovern
Narrated by: Dan Norris
Length: 3 hrs and 51 mins
Categories: Business, Career Skills
5 out of 5 stars 5.0 (6 ratings)

In July of 2014, Dan, Eddie, and Govs sat at a bar talking shit about making beer. Two years later, they'd opened their own brewery on the Gold Coast in Australia called Black Hops. It's been an epic journey, from "the little situation" in China, to a collaboration with the biggest entertainment franchise on earth, and finally - launching a brewery.

Operation Brewery tells their story and gives you every last detail on how to build your own brewery on a budget. Most brewing books focus on how to make a good beer. To start a brewery in 2016 and beyond, it's no longer enough to make good beer. Any business is as much about planning and marketing as it is about the product you make.

Operation Brewery delves into how Black Hops navigated the tricky waters of opening a brewery and also provides specific advice on a range of startup topics such as:

Awesome book on starting a brewery

What a great story - well written and spoken, loads of information and all concise and covering all aspects of starting a brewery from marketing and sales to buying large scale brew equipment and setting up a bar.

For those looking into entering the brewing business, this is very useful content. But the author shouldn't be the one recording the audio. difficult to understand even reducing the audio speed, and too many mistakes during the recording. This matches with the "reduced budget" spirit of the story, but this is not a free audiobook...

A good Story is definitely on the key ring of success!

Black Hops did it, operation successful.
Now a great read as to how it was accomplished. Not quite a blueprint it it more than you will get from many old school breweries. Dan , Eddie and Govs had the right mix and pulled off a feat to behold. This audiobook was way better than the manuscript. Besides getting to listen to Dan read it, he also added in some updates and clarity when it was needed. Enjoy

You might listen a bit slower and then enjoy the book.

I felt the narration was a bit rushed. Lots of information. Yes words man, beer.