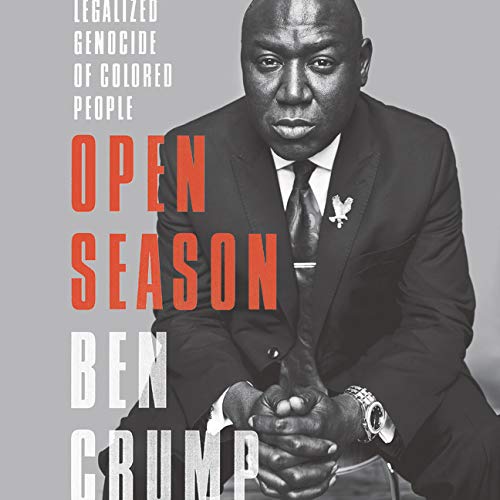 The president of the National Bar Association and one of the most distinguished civil rights attorneys working today reflects on the landmark cases he has battled - including representing Trayvon Martin’s family - and offers a disturbing look at how the justice system is used to promote injustice in this memoir and clarion call as shocking and important as the best sellers Just Mercy and Slavery by Another Name and Ava DuVernay’s film 13th.

Benjamin Crump firmly believes in the Constitution and its legal protections - that civil rights legislation covers all Americans, not just those privileged by race, wealth, or pedigree. A fierce and passionate advocate, he has devoted his career to fighting for justice for America’s marginalized. Open Season is his inspiring journey working on some of the most egregious cases that have shocked the nation, including those of Trayvon Martin and Michael Brown.

Shaped by his first-hand experience handling civil litigation matters in state and federal courts throughout the country, Open Season reveals the often hidden and systemic injustices minorities face, and illuminates how discrimination in the courthouse devastates real families and communities. Chronicling some of his most memorable legal battles, this brilliant litigator shockingly makes clear how our system is devised for certain people to lose and others to win, and, using evidence and facts, exposes how it is legal to harm - with the intent to destroy - people of color.

Crump offers a cogent analysis of legal tenets, including the 13th Amendment, the 1951 Genocide Petition to the United Nations, and controversial Stand Your Ground laws. He compares how race detrimentally influences sentencing, and reveals how police unions protect officers who shoot unarmed civilians. He also makes clear how budget cuts for education, the proliferation of guns, and high unemployment rates all directly contribute to higher crime rates.

America must live up to its promise to protect the rights of its citizens equally, Crump maintains. Thoughtful, well-reasoned, and powerfully persuasive, Open Season details one man's life mission preserving the hard-won justice for all.

What listeners say about Open Season

A great injustice is still being done to the African American people, still so long after slavery the disgusting legacy endures albeit in a different form in the political, justice and education systems.
America needs to wake up, take action, and stop being part of this evil!
After listening to this if I was American I'd feel ashamed of my country.

I recommend Open Season for anyone who really wants to know what the cry "Black Lives Matter" is all about. This book is a detailed narration of, not just past racial injustices in the justice system, but of the current injustices in the headlines today. Open Season is an important chronicle of the state of POC and poor whites in the American Justice system. After listening to this book, I'm convinced more than ever that the word "genocide" is not an overstatement or exaggeration when it comes to the state of black people in America.

The author, Benjamin Crump, is probably the most well-known civil rights attorney in America today and, in this book, he makes a riveting and persuasive argument that a silent genocide is being waged on "colored" people in America. Even though Mr. Crump uses the word "colored people" in his title, after listening to this book, I convinced more than ever that the word genocide is not an overstatement or exaggeration when it comes to the state of black people in America.

What really makes "Open Season" stand out and apart from many other important books about the conditions of POC in the American justice system is Crump's storytelling ability and the fact that he's been involved, as legal counsel, in most of the high-profile cases that he writes about. From Trayvon Martin to Marissa Alexander to Philando Castille (and many others profiled in this book), Crump is able to humanize the most complex legal cases and make a convincing argument of the role that racial biases played in their outcomes, in such a way, that even a child could understand and see the racial injustices. This book was a fascinating and fast read. I listened to the entire book in one night.

While this book should be mandatory reading for law students, lawyers, and judges, I also highly recommend to anyone who has ever questioned if we are living in a post-racial America or why, in 2013 and beyond, we still have to remind some people that BLACK LIVES MATTER!!

the information in this book was very eye opening and changed the concept of what racism is in America I knew it existed but was unaware of how far it went. most of the mentioned stories I thought I understood but with information kept from the public how are people supposed to understand them completely. things I once would have dismissed as not happening like institutional racism and environmental racism have now opened up to me that not only are they really happening but I can think of events near my home that prove it. if a person thinks they know what racism is they need to read this book to get the full scope of how it is ingrained into the operation of this country.

The book points a lot of injustice and plight but has no positive outcome. Story after story tells about how black and brown people have been mistreated. But there's nothing hopeful or optimistic about things or any outlooks for change. Even the conclusion says what should be happening but gives no advice or path that things are improving. I was expecting something different, but overall, I'll listen to it again.

I'm at a loss for words. I'm so much more aware after reading this book and terrified at the same time for myself and my race.

Absolutely one of the best books to listen to in today's climate. I have learned more from this book than I have ever learned from the news or any articles.

must read examine the system but examine yourself! it gives yoy a list of where to start.

Great analysis of the racist bent of American Law. Knowing it's necessary to fixing it.

I love this book. And I will recommend this book to my friends. This book is a must read to all people

from A thru Z

From the early settlers to the modern day slave owners, Mr. Crump covered Law and Order as it is practiced. Very compelling look at the law and how it's applied by the police, prosecutors, judges, law makers and the supreme court.

This a book for everyone to listen too, If you support people of color or not. This book breaks down the systematic and overt racism and inequality the system has handed people of color since the beginning of this nation. If you truly want to know why Black Lives Matter and steer this country towards true equality YOU MUST LISTEN. No more hatred for hatred sake it is time to understand and break the cycle.