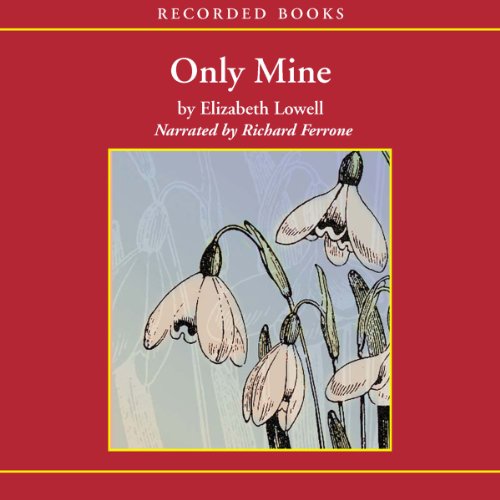 The New York Times,/i> best-selling author of numerous historical novels, including Only His, Elizabeth Lowell has become famous for her stories of heightened passion and sensual romance. Her Only series is popularly and critically acclaimed. Wolfe Lonetree, the illegitimate son of an English viscount and a Cheyenne woman, has agreed to rescue his friend, Lady Jessica, from an arranged marriage to an abusive Englishman. In return, she will accompany him to America to live in the Rockies as his frontier wife. Despite the frightening passion her handsome husband arouses in her, Jessica fears a man's touch and is determined to be married in name only. But Wolf has other plans for his naive young wife. Richard Ferrone's provocative narration is perfect for this tantalizing romance novel. He holds the tension level high as these two star-crossed lovers struggle to control their passions in their attempts to understand one another.
©1992 Two of a Kind, Inc. (P)2001 Recorded Books, LLC

What listeners say about Only Mine

This is the first book I have read by Elizabeth Lowell and I absolutely enjoyed it. I laughed, cried, tried to work out the plot, and felt good all the way through. The love scenes are intimate, feeling and true, if you feel uneasy with them, you've not experienced love in it's most beautiful. I lived the time, enjoyed the story and felt various emotions as i became apart of the story. Will listen to another of Elizabeth's audio's now, and i found the narrator good, it would be great if two narrators could do a story, 1 for the men and 1 for the women, but all in all good. Enjoy.

Romance as it should be: A strong hero and a spoilt lady must survive nature's harshness to subsequently find their love for each other.
The good narration completes the successful package.

I loved the first book in this series - only his, so I figured I’d continue with the series, but man! this book was a huge disappointment. This is wolf’s story but wolf is not very likable in this book. The heroine Jessie is worse. Here’s a summary of the book - just read this and spare yourself the time and money - Jessie is the daughter of an earl living under her guardians care in England. Wolf and Jessie were best friends as children but then she goes to England with her guardian and becomes an aristocratic lady who can’t brush her own hair or pack her clothes. She’s afraid of sex and childbearing due to her witnessing her father raping her mother. Her guardian wants her to marry so Jessie traps wolf into marrying her because he’s her best friend and would never make her have sex with him and he doesn’t need an heir since he’s not titled or rich (yes, this is clearly irrefutable logic in her mind); wolf spends the rest of the book lusting after her while simultaneously trying to convince her to get an annulment because he is convinced she is not the wife for him (she’s fragile, spoilt and cold and doesn’t compare to willow from only his). He is pretty stubbornly mean to her for most of the book but she kinda deserves it because she selfishly traps him into a marriage without sex or children because she needs ‘protection’. Ugh! In the last couple hours of the audiobook Jessie tells wolf her back story, they have sex and of course they are suddenly in love and happily married even though wolf had nothing good to say about Jessie throughout the book :-/. There was absolutely none of the suspense and chemistry from the first book. Skip this!

Nice story but not as good as "Only His".

I loved the stories in this series back in the day. Something about the woman being strong enough to prove the man wrong about his preconceived notions about her. But now, listening to the books, all I can see is what a$$hole the men are. I see absolutely no reason for the women to love the men. Misogynists, the lot of them! 😝

This story is an INVITING storyline that deserves a re-listen! The story is Hot, but the narrator makes it HOTTER! I absolutely love how the narrator captures the female voices of this story, coupled with the depth of the VERY masculine characters of this story. This is the 2nd story that I've heard with this narrator, so I'm becoming a fan. I plan to explore this author's works more, and especially the narrator.

I wasn't fond of Jessica. She was annoying and really, repeated his name about 1000 times.

Would you listen to Only Mine again? Why?

Which character – as performed by Richard Ferrone – was your favorite?

Although all were great, of course the best was alpha male Wolph Lonetree.

There were some jaw dropping moments, moments I giggled, and yes, some moments that actually managed to bring tears to my eyes.

Richard Ferrone could read my grocery shopping list and make it sound sexy, dangerous, and intense! With a story of this caliber, he rocks it completely. In spite of the silly concept of an "English viscount savage half-breed" hooking up with his soul mate, a half noble Scotswoman he's wanted since she was 15 in a very Thorn Birds kind of way, I was taken in by this story and could not put down my mp3 player for the entire 10+ hours. If you don't like the anti feminist aspects of historical romance, there are damsel in distress moments, but the main character proves herself as well. I lost sleep because I had to finish listening this story, work the next day be darned.

I enjoy Elizabeth Lowell's work and this book did not disapoint. A thoroughly enjoyable listen.

I FOUND THE BOOK TO BE A GOOD ROMANCE. I ALWAYS ENJOY ELIZABETH LOWELL WRITINGS. THEY ARE A HARD LOOK AT LIFE DURING THE ERA IN WHICH SHE WRITES ABOUT. SHE WILL CAPTURE YOUR HEART FOR EACH OF HER CHARACTERS. YOU WILL ENJOY ANY BOOK SHE SHE HAS OUT.

A waste of time and money