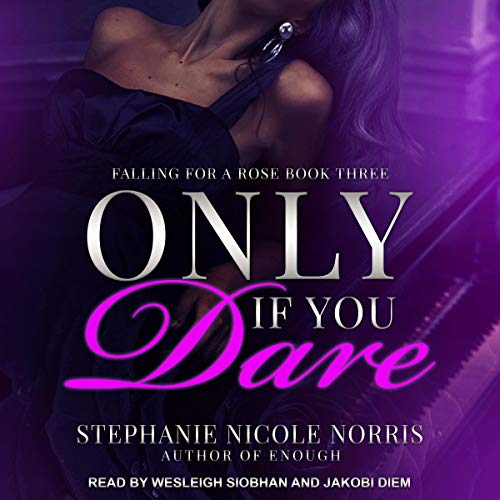 Only If You Dare

Life at the Houston Report for investigative journalist Desiree Stevens is no longer a fulfilling one. She's contemplating moving back to Chicago where her family resides, but Desiree can't deny that returning to her hometown for the sake of employment isn't her only reason. Just a few weeks prior, Desiree had the pleasure of meeting philanthropist Julian Alexander Rose, awkwardly enough, at the hospital. And since the strange encounter, getting Julian off her mind has been Desiree's biggest failure.

International male model Julian Alexander Rose is in the highlight of his career. As the owner of A Few Good Men Male Modeling Agency, Julian has his hands full with day-to-day business activities. He's only in Chicago for a short while upon meeting Desiree Stevens, and the unbridled hunger that overtakes Julian is soul-stirring at least. From the moment their worlds collide, Julian's certain there's more to their supernatural connection. Being a man unwilling to let Desiree get away, Julian formulates the perfect plan that lands them alone together, and his next move may just bring him to his knees.

What listeners say about Only If You Dare

I enjoyed this story. However, Desiree was a bit much to take at times with the second guessing and assumptions. As always Jakobi and Wesleigh were great, two of my favoritw Audible narrators.

struggled to finish because it bored me. This is the only book I have read by her that I don't want to read again. Also there should have been a pregnancy with how much chemistry was built and unprotected sex .

Stephanie Norris has done it once again! This is my favorite of the Rose series thus far. Julian is my new book bae. Well written and The narrators did a great job as always.

There was no real meat to this… the stalker situation happened and boom they just found the guy and moved on what was the point of that if it wasnt gonna tie into the story at all…that little tid bit was more interesting that the rest of the entire book…the best part of this was jakobi and wesleigh!!!

Awesome Series To Listening To On Audible Audio, U Aren't Going To Defend At All:

This is my second book my Nicole Norris and yes she delivered again. This book was great and I seen some traits of myself Two👍🏾👍🏾

If you're like me and enjoy steamy romance novels, this one's fir you. Get into it and enjoy just being taken away for just a little while.

Enjoyed the narrators as well; especially the deep sexy voice of Mr. Rose...he definitely transported me.

I really enjoyed the first two books in this series, so I have a particular interest in getting through the rest of them. That said, it was really difficult getting through this book, even with top notch narration. I’m used to novels where the storyline is over the top and fantastical—that’s something to be expected with a lot of romance novels because that’s just the vibe of the genre. That said, the challenge I found in this book was that the chemistry between the characters felt entirely too forced (or perhaps it was just underdeveloped), such that even THAT part felt fake and difficult to believe. There were parts where they were behaving in ways that made sense that there were in love, only to then seemingly out of nowhere experience this random roadblock about why they couldn’t actually be together; the whole thing made it hard to get invested in the story.

I’m too far in to not ready the rest of the series (Santana’s story is next and I’m hoping it’s better); however, I wish I didn’t have this one to have been a hurdle to get through, because I really like this writer’s storylines overall.

Great book!! LOVED the travel. I wonder how the photo shoot was received once it was published.

I loved how Julius did not fight his feelings and what is heart was telling him. This was a very nice romance read.