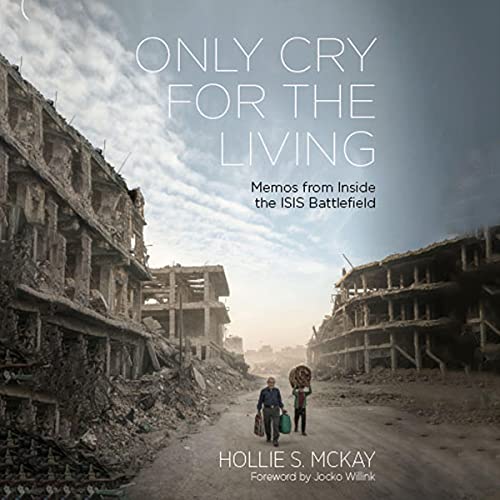 Only Cry for the Living

Only once in a lifetime does a war so brutal erupt. A war that becomes an official genocide, causes millions to run from their homes, compels the slaughtering of thousands in the most horrific of ways, and inspires terrorist attacks to transpire across the world.

That is the chilling legacy of the ISIS onslaught, and Only Cry for the Living takes a profoundly personal, unprecedented dive into one of the most brutal terrorist organizations in the world.

Journalist Hollie S. McKay offers a raw, on-the-ground journey chronicling the rise of ISIS in Iraq - exposing the group’s vast impact and how and why it sought to wage terror on civilians in a desperate attempt to create an antiquated “caliphate”.

What listeners say about Only Cry for the Living

I’d recommend this book to anyone looking to try and understand different perspectives and seeking to make sense of an important and formative modern conflicts currently shaping the Middle East. The author doesn’t focus on statistics, numbers and a macro narrative, but rather collective individual stories that are key to understanding (and hopefully finding solutions to) what causes our advancing civilizations’ fall back into barbarism, war and inflicting suffering.

Missed the early rise of ISIS

Having served in Iraq and dealing with ISIS first hand myself in 2009 and 2010, she missed key history on their rise of destruction in Iraq. in October 2010 they took over the Iraqi stock exchange and an orthodox Christian Church which they held hostage for many hours October 30th of that year. I was part of the negotiations and attempted rescue but they slaughtered many that year in their furious rise to power as we handed over prisons to the Iraqi government. Overall good so far but she is not correct on when they rose to power.