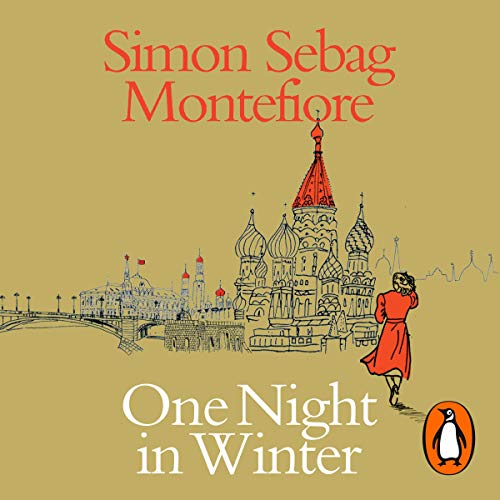 One Night in Winter

If your children were forced to testify against you, what terrible secrets would they reveal? Moscow 1945. As Stalin and his courtiers celebrate victory over Hitler, shots ring out. On a nearby bridge, a teenage boy and girl lie dead. But this is no ordinary tragedy and these are no ordinary teenagers, but the children of Russia’s most important leaders who attend the most exclusive school in Moscow. Is it murder? A suicide pact? Or a conspiracy against the state?

Directed by Stalin himself, an investigation begins as children are arrested and forced to testify against their friends - and their parents. This terrifying witch-hunt soon unveils illicit love affairs and family secrets in a hidden world where the smallest mistakes will be punished with death.

What listeners say about One Night in Winter

enjoyable, rather despite my better judgement

The background knowledge and information conveyed by the setting is certainly interesting and Simon Sebag Montefiore's research into Stalin shows. However the foreground story really is unbelievable and moreover has been softened and sanitized, thereby putting the credibility of the entire book in jeopardy. Worse, it is not helped by a very humdrum rendition by Simon Slater, who frequently makes incorrect sense breaks - odd, because he seemed to read the much more challenging Wolf Hall to considerably better effect. So why, despite all these criticisms, am I still engaged and listening until the end? I suppose because it has the auditory equivalence of being a "page turner". I end with an excellent quote from the Irish Times : "Simon Sebag Montefiore ingeniously blends the invented with the real but, like the author’s name, the story is a tad too long."

What did you like most about One Night in Winter?

The main theme, the arrest of a group of teenagers, friends of the victim of two murders during the victory parade in Moscow in 1945, encapsulates the cruelty and topsy turvy world of the Stalin regime. The crudity of the interrogators and of the top apparatchiks is vividly cnveyed. Tension is built up in a series of episodes with clues to suggest that each one will potentially incriminate the actors. We know this but don't quite see how. So we have to go on listening to find out how it will be used and distorted by the authorities. Stalin is a sinister backround presence, a mixture of bonhomie and menace.The element of irony comes from the striving by the parents of the teenagers to be "good bolsheviks", which means suppressing normal human feelings. Scenes of almost unbearable brutality are juxtaposed with scenes of what seem to be normal enjoyment. The writing could be more economical : there are to many adjectives and too many brutal incidents. The love scenes are OK but a bit overdone.

What other book might you compare One Night in Winter to, and why?

Hans Fallada's Alone in Berlin, also describes life under a brutal totalitarian regime, but because the writing is more economical, the effect is stronger

The early scene where the teenagers in the Pushkin club meet to re-enact the duel between Onegin and Lensky in Eugene Onegin., which perfectly captures teenage innocence and enthusiasm, and hero worship of the cub leader,but at the same time one senses that it will all go horribly wrong

Not really. I should have wanted to cry and perhaps I nearly did when very young children were brought into the Lubianka, missing their Mums and bedtime toys, but generally nausea is a more accurate description of my emotional reaction. Possibly that was intended.

It was very well read,especially, given that the narrator is male, when women or girls were often speaking. Local accents were convincing.

Loved the story though it was in history section so thought it was non-fiction. It is a novel but brilliant!

A potentially gripping story spoilt by too much inconsequential and self indulgent rambling..not nearly as good as Sashenka

Have you listened to any of Simon Slater’s other performances? How does this one compare?

Not a patch on Sashenka

The story is captivating but Slater's very odd breathing patterns and strange mouth sounds, along with the obvious editing performed to hide this, rendered this audio book almost unlistenable. I would never buy another audio book narrated by him again. Very annoying in the extreme.

Overall I think this trilogy of books is fantastic; however of the 3 books I probably enjoyed this one the least due to the reduced amount of historical context. The stories that intertwine through this book are engaging to a point but love stories are not really for me.
From an Audible perspective I enjoyed the narration of this one the most. Unlike the other 2 books, the accents in this one were good (eg no random West Country accents for Russian soldiers!) and place names were correctly pronounced. It's a shame that the same person could not be used for all 3 - it becomes an annoying distraction when a character that appears in all 3 books has his name pronounced differently in each one!
Those gripes aside, I highly recommend the series.

well written account of daily family life at different levels and times in Stalin's Russia. just what you would expect from a master of his subject such a SSM. this is the only novel of his that i have read, so far at least. the court of the red tsar was a great factual account of the whole era. i certainly recommend this to anyone interested in Stalin or the USSR under his leadership, but who wants a bit of fiction.

Powerful stuff: how terrible it must have been under Stalin's regime. Russian novels are renowned for their relentless gloom; this novel about Russia seeks to outdo even them. With our victims locked in the depths of prison, I just had to give up, I couldn't take any more.

loved this book along with the other two of the Moscow trilogy. Found it harrowing at times and very uplifting at others but was compelled to finish all three books as aware many people perished at the hands of this evil dictatorship and nominee should be ignorant of how things were at this time in the history of Russia.

Story and reading both good, but editing inexplicably bad: Joins that should have been unnoticeable often marked by fluctuations in background sound level; uneven pauses in narration; and worst, an unsettling absence of pauses between chapters.