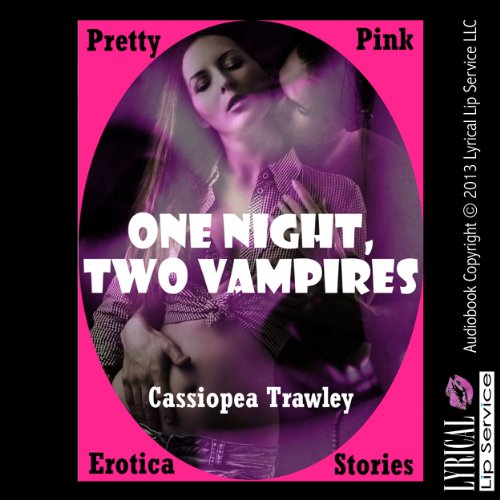 She went to her bar with her friend, and when they find two very interesting men who show interest in them, it looks like things will turn out wonderfully. Then, her friend meets an old flame and leaves her by herself. Angie is about to discover these are no ordinary men, and both of them want her.

Warning: This audiobook contains explicit descriptions of sexual activity and includes paranormal sex, vampire sex, double penetration and more. Only mature adults who won't find that content offensive should listen to this audiobook.

Karl handed her one of the drinks, and she took it with a smile. It was sweet and very strong, and she raised her eyebrows. “Something with Grand Marnier, grenadine, and two or three spirits. It’s an old family recipe, actually. I had to tell the bartender how to make it. If you’d prefer, I’ll order something else.” She shook her head. “No. I was surprised, that’s all. It’s very good, actually.” She wasn’t just being polite, the drink was good, though stronger than she’d ordinarily drink. Karl smiled. “It would be no trouble to replace it.” “Please,” she said. “I’d like to keep this drink.” He smiled, and there was something about his smile that thrilled her. It wasn’t unlike crushes she’d had in high school, the almost painful and desperate need for approval and notice from a boy in class or her English teacher. She turned her attention back to her drink and hoped it wasn’t obvious.“Stop charming her, Karl. She comes willingly or not at all.” It seemed a strange thing to say, and Thomas turned to Angie. “I’m afraid my friend can sometimes be too persuasive,” he said. “We will take no offense at all.” Angie rolled her eyes. “Boys,” she said, “I love this drink. Now stop before you make me feel self-conscious.” Thomas smiled at her and put his hand over hers, and the touch was almost electric. Again came the youthful wistfulness, and again she tried to distract herself by getting lost in the drink. Before she realized how quickly she’d been drinking, she’d finished it. Karl smiled and pushed over the glass originally intended for Vicky. “Do you come to this bar regularly,” Karl asked, “Because I’ve not seen you here before.” “I don’t go out much at all,” Angie said, “But Vicky practically begged and then…” “And then abandoned you,” Thomas said.

What listeners say about One Night, Two Vampires