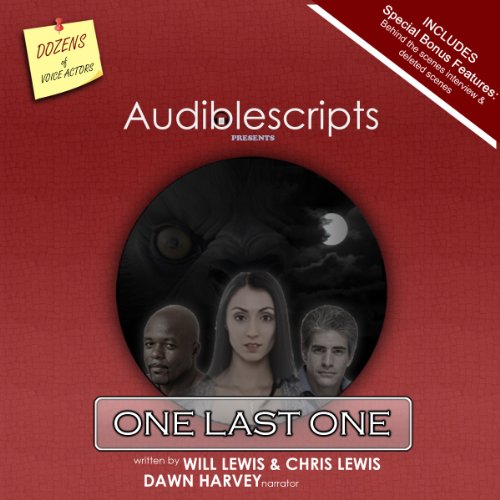 By: Will Lewis,Chris Lewis
Narrated by: Dawn Harvey

Regret. Loneliness. Despair. Alina struggles with these feelings every night. Centuries ago, her kind was all but wiped out by a mysterious disease that left them unable to produce the venom needed to make new vampires. She's the last one - isolated in what feels like a never-ending nightmare.

But she discovers a homeless man named Terrence who's in the early stages of becoming a vampire. He doesn't remember how he got turned. That doesn't matter to Alina because if he feeds, he'll complete his transformation and have the power to save her race from extinction.

Alina offers to teach him vampire culture and history. Longing to find a place where he belongs, Terrence accepts. But he's appalled at the idea of living on human blood, so he refuses to feed. Alina resorts to manipulation and deceit to try and get what she wants.

Meanwhile, Alina's past closes in on both of them as an immortal named Lanier hunts her to avenge the murder of his brother. And he's been ordered by a mysterious figure named Duke to find a special book thought to be in Alina's possession. But what's in this book? Why is it so important?

If Alina can save her race, she'll find her redemption. But can she persuade Terrance to do the unthinkable...before it's too late?

The character were so alive and active it was like being in the story. The never was a dull moment.

This is truly cutting edge audio entertainment. This is refreshingly different because the action taking place let me easily imagine what was going through the characters minds rather than the narrator telling me like in traditional audio books. I loved that there is a full cast of characters that bring the entire story to life. Another plus is that it is fairly short and I could listen to it in just two settings rather than five or six. The narrator and all of the actors did an excellent job! Three Thumbs Up Audiblescripts! I'll definitely listen to more Audiblescripts productions. Thanks you.

What made the experience of listening to One Last One the most enjoyable?

One Last One is the FIRST vampire story that I've ever chosen to take notice of. No, I do not live under a rock; I simply never thought this genre would appeal to me. I was into Chapter Two before I realized that I was hooked.

The first Chapter wasn't poorly written, it was my getting accustomed to the narrator's voice and inflection, while trying to establish the cast of characters in order to readily recognize them as they moved through the story.

Once I felt comfortable with the characters, their interactions, the conflicts being presented, and the timeline of events, I began to listen in earnest. Powerful, action packed, with a touch of melancholy at the end, I truly enjoyed the story line and would certainly entertain thoughts of listening to a sequel.

Lanier - believable and genuine....I enjoyed the emotions he expressed in his voice.

Which character – as performed by Dawn Harvey – was your favorite?

I found her character to as narrator to be spot on ...

Particularly memorable is the scene in which Alina tells Terrence how very proud she is of him.

Loved it! If you like vampire fantasy, get it.

I really liked the concept. It's like listening to a movie. I mean, instead of listening to one person narrate an entire story, the narrator sets the scenes and describes the action while other actors play the parts in the dialogue, which makes the characters more authentic. It kind of guides you through the visualisation process.

I could feel the emotional pain of Terrence as he fought against his instinctive need to feed.
It was also nice to hear interviews with the writers and some of the cast at the end.

The action is very well described with gory attack sequences.

Can't Wait To See This On The Big Screen!!

Where does One Last One rank among all the audiobooks you’ve listened to so far?

This is actually my first ever audio book. If they're all like this, I'll be sure to pick up more copies!

What other book might you compare One Last One to and why?

This is my first one, and it has set the bar extremely high with the voice talent, story, and production.

I'm sorry to say that I have not, but look forward to more!

Keep up the great productions!

One Last One is amorphing good time!

What was one of the most memorable moments of One Last One?

Without giving anything away, early in the story when a couple out jogging comes across a lone, female runner. This event sets a tone for many equally unsettling encounters that are to follow.

One Last One is more an audio screenplay than a book. It took me a little while to settle into the rhythm and pacing. Once I was engaged, I didn't want to put it down (or in this case, turn it off).

It is well worth listening to this genre. The screenplays average under three hours and are extremely fast paced and action packed. Vampires aren't really my thing but One Last One made me eager to try out other stories by Audiblescripts.

If you like Vampire Stories, this is for you!

What did you love best about One Last One?

The way the narration was done

The odd relationship between Alina and Terrance. I was curious as to how it would end up.

I enjoyed listening and visualizing the story and characters in my own mind. Especially the fighting scenes!
It was interesting to have the interview section with writers, producer and actors at the end.

Intriguing and loaded with action. 1st Class voiceover work throughout.

What was one of the most memorable moments of One Last One?

The tense mano a mano moment when Ages-old Alina makes the mistake of trying to force Terrence to bend to her Vampire will.

I have only heard small samples of her work but I was impressed by her ability.

Because I love dogs, I was very touched by the bond between homeless man Terrence and his canine companion 'Weeds'.

Although I don't ordinarily gravitate toward supernatural screenplays, this one rolls right along with a very distinctive array of well-cast character voices and almost non-stop action as Human, Were and Vampire cultures collide and blend.
Hearing a well-performed Narration by a female performer was a big + and a nice change of pace.