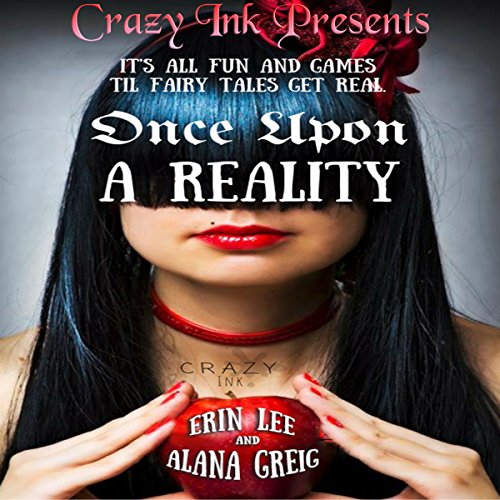 Once Upon a Reality: Twisted Spins on the Classics

What happens when fairy tales get real? Things are about to get real - and twisted - by two very different authors. Twisted tales based loosely on the classics. Can you face reality?

What listeners say about Once Upon a Reality: Twisted Spins on the Classics

What did you love best about Once Upon a Reality: Twisted Spins on the Classics?

The concept of taking classical fairy tales and sort of putting them in an alternative Universe.

What other book might you compare Once Upon a Reality: Twisted Spins on the Classics to and why?

Which character – as performed by Tiffany Marz – was your favorite?

Pass on this one

This was interesting in places, but I would not recommend using a credit on it. At first I thought it would be great, but I soon found that the initially interesting stories (which do not make up the whole book; I'll explain soon) all followed the strange pattern of getting about 2/3 of the way done and then summarizing the last part in a few meager sentences. You get drawn in and are anxious to know what happens next, and then it's like, what? That's it? Every single time.

In addition to that, many segments of these stories were written in a fairly juvenile manner, and could have benefited from a good editor.

The narration, also, took a wrong turn. I thought the sample sounded great, but for about 50% the book, the narrator put on an absolutely atrocious fake British accent that was, for me, totally unlistenable. I had to skip through these parts. Honestly, I have no idea how they could even send it out like this.

Then there were the parts that came before the sparsely scattered 'interesting parts' or the book, which is to say, the ACTUAL story adaptations that we are supposed to be getting here. These were basically bare-metal explanations of the original fairy tales on which the stores were based, and were boring and tedious in the extreme. If you are like me, you were drawn to this book because you already have an interest in fairy tales, and have likely heard all these stories before in their original form. Why the authors though we would need to hear them again in this dissected and styleless form--thrown on a sterile, stainless steel tray with every bit of storytelling nuance snipped out of them--I have no idea.

To sum it up, the modernized fairy tale adaptations were vaguely interesting, but they did not make up a large enough portion of the book to make it worthwhile. Since the book itself is only 3 and a half hours long, I would say the parts I could actually tolerate were less than an hour. On top of that, the price point of this book (currently a little over $10 for members), is in my opinion too much for a 3.5 hour audiobook--much less one where 2/3 of the book are essentially meaningless fluff.

So I would recommend you skip this one. If it were less than $5 it might be worth it, but as it is, and for the substance we are given, I would definitely pass.

I received this book for free at my request and have voluntarily left this review.

'Once Upon a Reality' has a truly fascinating concept! I think the book could have really benefited from having a good editor as there were parts that just didn't work at all. Overall, it was fun but I don't think I could suggest a friend use a credit on it. It just wasn't executed as well as it could have been! Narration by Tiffany Marz was fine, though.

Really enjoyed the twists these stories took Great narrator as well! I received a free review copy of this audiobook at my request and I have voluntarily left this review.

Not a bad retelling of classics.

It probably would have helped if I knew all the stories but I found them entertaining nonetheless. Some modern twists on the classics in multiple short story format. I definitely found it interesting enough and the narration was excellent. Not the happy ending style, but some excellent twists! I enjoyed the girls in the closet and Hansel and Gretel the best. I received a free review copy of this book at my request and have voluntarily left this review.

Overall I was really underwhelmed by this. It really needed a good editor. It felt like the author just didn’t know how to properly finish a story, they all seem to just drop off. The narration was fake sounding to me. I didn’t care for it.

Not your kids' fairy tales

I was given this free review copy audio book at my request and have voluntarily
left this review.

So, this was an interesting concept. Retelling of classic fairy tales in a modern setting with some sort of dark twist. For the most part, I really liked them. Some more than others, sure, but I found myself entertained throughout the 3 and a half hours of this book.

I liked that the authors first give you a synopsis of each fairytale before each gives you her own version. Many of these stories are not very cheery, just like the tales they are based on. The strong point of this collection is the lively narration by Tiffany Marz.

the spin in the book was absolutely incredible I liked the idea and I think this book could have been both ways or very bad or very good and in this case it was very very good incredible in there I don't have much to say about the book and I enjoyed it I think if you like fairy tales you will enjoy this book because it's fairy tales for adults
the mixture with reality in the book was what made this book perfect
I was given this free review copy audiobook at my request and have voluntarily left this review."

Fairytales meet Reality and get Twisted

Once Upon a Reality: Twisted Spins on the Classics by Erin Lee and Alana Greig. Narrated by Tiffany Marz. I always have been a fan of Fairytales since childhood growing up next door to my Grandmother who was a school teacher. She used them for me as morality lessons. I was looking forward to these for a new perspective and I was not at all disappointed.

I liked the format of Once Upon a Reality. The retelling and updating of the classic stories with the ‘real deal’ and ‘twisted version’ classic stories made for quality listening. I can say with assurance that I have never heard versions quite like these and I loved the content to be found in each new version of the classic tale. The six stories in this audiobook collection are-Giant with Three Golden Hairs, The Six Swans, The Little Match Girl, Puss in Boots, Snow White and Red Rose, Pinocchio, and Hansel and Gretel.
.
The Hansel and Gretel reality story was startling and horrific. It was so detailed that it was almost hard to keep listening to. The authors and narrator crafted a painted a horrific picture of abuse. The twisted version was a great shift in perspective from the original story. Being able to hear other characters points of view when in modern takes on fairy tales create a wider universe for the author and characters to play in, after all, there are always two sides to every story. All the stories in the collection are like this short synopsis.

The narration is provided by Tiffany Marz. This is the first time I have ever heard a performance from Ms. Marz but it will not be the last. Ms. Marz took what was an excellent book and created an amazing performance. She exhibits skills and talent in this audiobook that are of superior quality. The listener becomes invested in the characters and the story because of the narration she provides. Ms. Marz gives each character unique voices and a great emotional performance in many of these tragic stories. The production quality is also very good on this audiobook. I really recommend getting this book for ages 17 and up. I was given this free review copy audiobook at my request and have voluntarily left this review

Sometimes broken things are there to teach others.

A delicious idea: rewrite some classic fairytales as modern reality stories. But the reality is the reinterpretations are mostly tedious and no less unreal than their predecessors. Seven original stories, including Puss in Boots, Pinocchio and Hansel and Gretel, were selected - some much better known than the others. The originals are briefly outlined before the new tales are given. For some reason, this reader had expected that these new interpretations would be plausible, probably sad or horrific, but nevertheless true to life. Yes, a couple are but mostly they are just the same old stories in a loose disguise. A few are fresh - like a completely new look at Puss in Boots, and one Little Match Girl retelling was heartbreakingly real but mostly it's same old same old.
The narration by Tiffany Marz was clear but too slow, needing to be speeded to 1.25. and, like the stories themselves, uninspired, if acceptable.

My thanks to the rights holder who freely gifted me a complimentary copy of Once Upon a Reality, at my request, via Audiobook Boom. Sadly, I had expected far more than was delivered in the story contents which often also seemed not fully finished but rushed and in need of fine tuning editting or, preferably, complete rewriting.