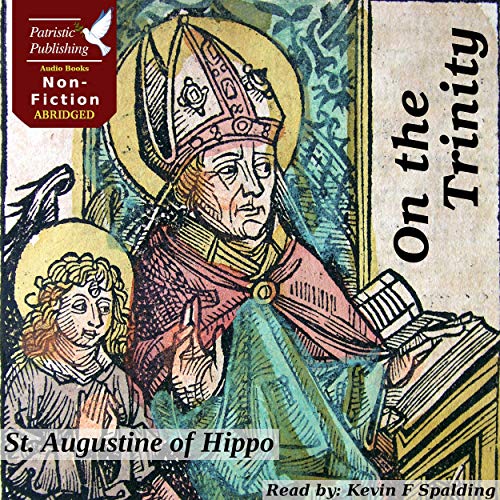 By: St. Augustine of Hippo
Narrated by: Kevin F Spalding

This book was written in Latin by Augustine of Hippo (354 - 430) to discuss the Trinity in relation to God the Word (logos). Even though it is not as well known as some of his other writings, it is considered by many to be his masterpiece and of more doctrinal importance than either the Confessions or the City of God.

St. Augustine is considered a saint in the Catholic Churches, the Eastern Orthodox Church, and the Anglican Communion. He is ranked among the doctors of the Church in the Roman Catholic Church. Many Protestants, especially Calvinists and Lutherans, esteem him as one of the theological fathers of the Protestant Reformation on account of his teachings on salvation and divine grace.

What listeners say about On the Trinity

Well done, but not the full book

The reader does an admirable job reading. Just be aware that only the first nine of Augustine’s fifteen book treatise is contained here.

I had long wanted to sit and read St Augustine's classic work on the Trinity. This is a major work with incredible significance, not just for the Catholic Church, but in the context of a dispute that has raged for millennia now over the nature of Christ. And this is definitely a must-read work to better understand the arguments that many have presented, at least in terms of Augustine's response to those arguments, and he is quite clear in his rejection of certain of those arguments. The very length and complexity of Augustine's work made me suspect that I really would have to see the text before me, that an audiobook would either not do the treatise justice or not allow space and time for the listener to follow Augustine's arguments and comprehend his words. But the narrator, Kevin Spalding, did a fine job of guiding the listener along. His skill at narrating is most clearly highlighted by his refined intonation, which guides the listener through otherwise exceedingly long and complicated sentences and paragraphs. I felt Spalding's narration was indeed enough for me to follow and appreciate Augustine's amazing treatise.

It grieves me to say that the narrator totally destroyed my ability to enjoy this wonderful tome. I can follow dense audiobooks (such as Thomas' Summa) without too much difficulty provided the narration is at least average. Unfortunately, Kevin F. Spalding's reading did not come up to the tolerable minimum. In fact, I've heard Blue Macaws with a greater range of intonation and more human-like voice inflection. Listening to his highly predictable sing-song rendition is the audio equivalent of a children's rollercoaster.

I do realise the importance of this work but it is very hard to follow.