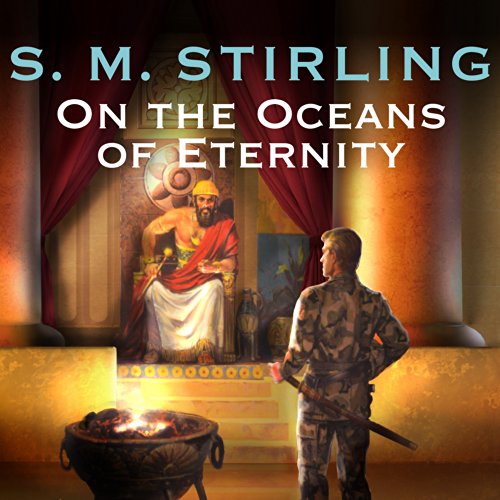 On the Oceans of Eternity

Ten years ago, the 20th century and the Bronze Age were tossed together by a mysterious Event. In the decade since, the Republic of Nantucket has worked hard to create a new future for itself, using the technological know-how retained from modern times to explore and improve conditions for the inhabitants of the past.

Some of these peoples have become allies. Some have turned instead to the renegade Coast Guard officer William Walker. And, for 10 years, the two sides have tested each other, feinting and parrying, to decide who will be the ones to lead this brave new world into the future. The final battle lines have now been drawn. And only one side can emerge the victor.

What listeners say about On the Oceans of Eternity

I hope there will be more. This series git me through many a long drive.

Stirling does it again!

A great ending to a magnificent series. The death of Walker was fitting to be sure. Left me wanting more though.

Terrible there is not a fourth book

Terrible I say, terrible that there is not a fourth book to this series. I have read these books 6 times and most likely will read them many more times. The story is very well written and narrated each book is hard to put down when started. Thank you for your imagination and writing.

I loved all three books. the story and reader ate awesome. I wish there were more.

There's very few writers that can come close to S.M. Stirling unique combination of Character development, worldbuilding, and a very strange premise.
I remember where i was whem i started this series, and I'm very proud of having listened to it.

A terrific conclusion to a story for the ages.

Stirling concludes his Nantucket series in epic fashion, tying up all the loose ends and weaving just enough threads for a second set of tales that we are all hoping to read!

one of the best time travel stories

This is one of the best time travel stories I have ever read. The characters are interesting and the time period is one not usually visited in similar stories. There is good action, suspense, and twists. The narrator is great at differentiating characters. Story is great.

great story concept. I didn't like the way that each chapter begin with the dates and locations in which it took place. The main problem was that the same chapter would include three or four locations and a similar date , but didn't have clear differentiation between when you were switching from one place to another within the chapter.

If you're an ember verse fan, read these books

These were great. If you like the emberverse series read these 3. They go hand in hand with the first 3 of that series. Great narration.

I Love This Series

I love this series. I listen to it at least once a year, and read it yearly before they came out on audio

As always, good in most parts!

Wide ranging book, continuing the Nantucket 'Event' story. I enjoyed this mostly, bit too bloody in parts for me, and moments of other nastiness from the baddies I could do without, but the writing is very skilled, stories carefully researched, if a little far fetched. Good to spend more time with the Isladers, and their dilemma. At 25 hours or so an amazing bargain, most authors would have stretched this out to 3 books at least. I didn't find it hard to follow, the chapter headings are very clear, though not really necessary.

What would have made On the Oceans of Eternity better?

A storyline which had one time-line instead of chapters with 4+ different times with 4+ different places... each of which related to one another though they may be the end or beginning?! I want less characters so I can get to know and care for them rather than a people who seem to be multiplying like bacteria. I want to see how the gestalt comes about rather than shards of time fractures. The first book had more about the engineering side of things which I liked though it isn't for everyone. I have read another review which said that the story could be split with the main thread then other (preferably) mini-books being released with side adventures would be one solution.

I have dies the fire by the same author and I will give it a go. I'm really turned off by the idea though to be honest.

Have you listened to any of Todd McLaren’s other performances? How does this one compare?

I have listened to Todd McLaren before. I'd say he's a safe pair of hands and in my experience delivers a consistently B- to B+ performance (though never amazing). On this recording I felt he needed to slow down with the ridiculous chapter headings (though the chapter headings were not his fault).

Confusion due to the awful design and frustration with the authors need to turn a 250 page page-turner into a flabby War and Peace.

I really enjoyed the previous 2 books in the Nantucket series, although they were not perfect. However, the awful way the Chapters were written made it impossible to keep track of key events without a campaign map, notes and probably a written copy too. I gave up 50% of the way through download 2 of 4 and doubt I'd go back to it.