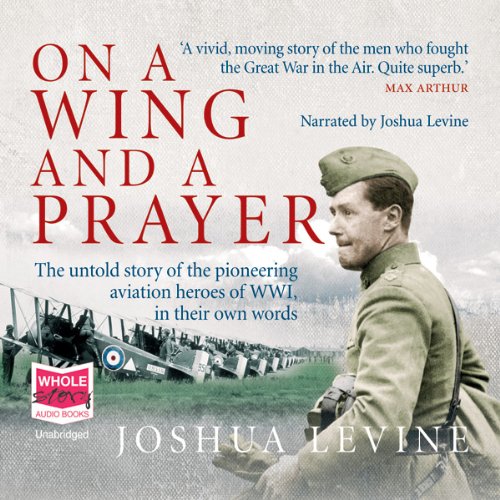 On a Wing and a Prayer

Few are aware of the risks that the pioneering airmen of the First World War took. On a Wing and a Prayer is a narrative history that conveys the perils of those early days, the thrills of learning to fly, and the horrors of war in the air at a time when pilots carried little defensive armament and no parachutes.

In 1914 aircrafts were a questionable technology, used for only basic reconnaissance. But by 1918, hastened by the terrible war, aircraft were understood to be the future of modern warfare. The war changed flying forever.

The stories are presented to the reader in a frank and open way, revealing the feelings of the men who defended the trenches from above and witnessed the war from a completely different perspective.

What listeners say about On a Wing and a Prayer

I can smell the Caster Oil burning

Hypnotic and moving stories portrayed through the eyes of individuals about the great war fought in the air.

On a Wing and a Prayer (unabridged)

This book provides an insight to the fragility of the aircraft that were flown in those days. It must have taken huge courage to get into the earlier models and take off. Fortunately, they flew so slowly, they could land almost anywhere.

Just Wishing It was much longer

The subject of the Flying Aces of WWI, and in this case those who pioneered the phenomenon, is one of the most fascinating topics in all of military history. Joshua Levine has managed to write an engaging, lively narrative about the men who were the first to fly in this capacity, brining the realities home for the reader. Not only was flying extremely dangerous during this time during combat, but most died in basic accidents. The men of the Royal Air corp were the bravest of men. There is never a dull moment and one wishes the book would never end. It's that good. And in narrating, Levine does a stand out job. What a wonderful listening experience. It just doesn't get better.

A gem of engaging personal accounts

I have literally just finished listening to this book and was moved to write up a quick review straight away. This book is absolutely spell-binding...

The major thing that struck me was the humour - admittedly sometimes dark - that surrounded these flyers. They all knew they lived on a knife edge yet often saw the comic in the absurdity of their existence.

The author brings in a breath of fresh air to this historical account and makes these commentaries modern and accessible, and thus makes the whole process of this fledgling air warfare completely understandable.

As you might imagine there is a lot of tragedy to the accounts and - becoming of this miserable war - a sense of wasted young lives - but as so often true of the darkest moments you also see the best side of humanity as well.

Perhaps the most poignant aspect of this is that air war at this point was at a cross-roads between the Victorian and modern age, and the attitudes and characters are an intriguing mix of the 'old school' and very modern. They express themselves both in a very contemporary and obsolete way, which tells us a lot about the Great War, why it was fought and why it was fought the way it was.

Above all the accounts of the air combat are enthralling. But I would say exciting is the wrong word, as there is not feeling that this was in any way a great adventure, but rather a deadly endeavor. You are most definitely not left entertaining any illusions about how wonderful or romantic it would have been to be a WW1 flying ace.

Misses the mark by a mile...

I'm quite an avid fan of all things aeronautical, and so was looking forward to this title. I'm still not quite sure what happened but I think a lot of my problem withn this book is the narrator Joshua Levine.

I think most people are aware of the great dangers faced by the earlier aviators and that almost half of those killed during the Great War actually died in training, so basic was the technology of the time. But all of this is lost as Mr Levine's book paints a picture of a Royal Flying Corps that is little more than an exclusive boys club for the priviledged classes, where working class people have no hope of joining and enrolment depends solely on if one went to the 'right' school or had relatives in Whitehall.

Rather than describe the conditions during training and then how these young men were dropped straight into battle with frighteningly few hours of flying under their belts, we get endless tales of arrogant public school 'chaps' treating the whole thing as a bit of a lark. All of this is only made worse by Mr Levine's reading, and the feeling that he finds this all 'frightfully admirable'.

Whilst I'm sure Mr Levine's book is, sadly, a very accurate picture of how things were back then, I would've preferred some balance from the 'old school chums off on a spiffing adventure' tone.

A fantastic audiobook looking at the war in the air during the great war. Whilst I was aware of the vast majority of the content it was still incredibly interesting listen. I have given it 5 star but it should be more like 4.5 as there are a couple of things that would make it a proper 5 star book.

1) Rather than jump forward and backwards between the time frame covered, i.e. one minute its discussing 1916 then 1918 then back to 1914 it would flow better if it went chronologically through the period, although it does try to do to some extent but it could be better.

2) Use a few third parties to read some of the excerpts from the people who were actually there as it was a bit tricky at time to figure out where the quoted speech had finished and the "author" was now talking again.

Highly recommend to any one with even a passing interest in aviation or the great war!

Really this was excellent book. Listened to it from start to finish in one go. I actually took a long route home from Dublin to Mayo so I could get it all in. Very different era. So much dedication gives rise to so many questions. Why did they jump in planes knowing full well their lifespan was measured in weeks. Some of the stories were very funny particularly those relating to the training exercises. I think a certain Irish airline must be using their training manual. Enjoy
Ciaran

I can’t praise this too highly. It encompasses personal memoirs and diaries, and never loses complete realism. No polemics; rather, it is as if you are joined by a golden thread to those who were there. A privilege, and a sense of loss when finished.

Something I knew little about. The book covers the fledgling flying corps in WW1. Lots of stories will leave the reader hoping for more.

It's like being there in the cockpit with these Heroes!!! Flying over the trenches in the Great War

If you could sum up On a Wing and a Prayer in three words, what would they be?

What other book might you compare On a Wing and a Prayer to, and why?

The account given by an RE8 pilot who was shot down but survived.

As ever, I was left with a sense of admiration for the aviators.

Captures the mood of the time perfectly. My grandfather was one of the very first pilots in the RFC. I have always read whatever books on the topic that come along. This book relates many accounts well known to the enthusiast but critically it deals with two aspects of the time which are seldom discussed. Learning to fly before the war began and also the lot of the less glamorous and highly vulnerable aviators who ploughed up and down the lines directing artillery and taking photographs. These accounts are revealing,indeed fascinating.