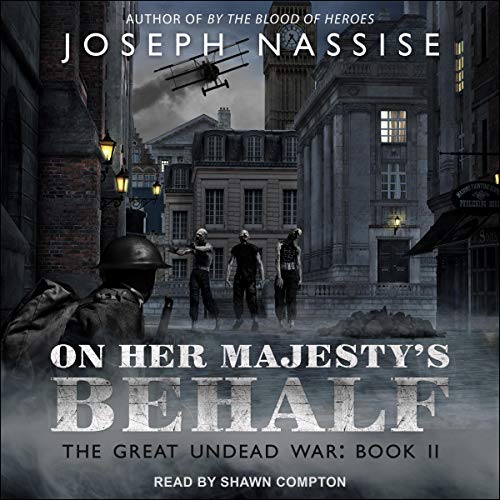 On Her Majesty's Behalf

The outrageously inventive follow-up to By the Blood of Heroes from New York Times and USA Today best seller Joseph Nassise!

At the close of 1917, the Germans introduced a new type of gas, T-Leiche - "corpse gas" - a revolutionary weapon that changed the war. Instead of killing the living, T-Leiche resurrected the bodies of the dead.

For those who survived the killing fields of France, the danger has only just begun. Veteran Michael "Madman" Burke and his company have just been assigned a daring new mission by the president himself: rescue the members of the British royal family. But Manfred von Richthofen, the undead Red Baron and newly self-appointed leader of Germany, is also determined to find the family.

In the devastated, zombie-infested city of London, Burke and his men will face off in an unholy battle with their most formidable opponent yet: a team of infected super soldiers - shredders - who have greater speed and strength than their shambler predecessors. If they don't succeed, all of Britain will fall into undead enemy hands.

What listeners say about On Her Majesty's Behalf

Excellent Sequel to a Great Series

Another great installment in The Great Undead War. The narrator is excellent and this book builds more on side characters. My only issue is a discrepancy with the first book on the dead turning into zombies. Otherwise the series is excellent.