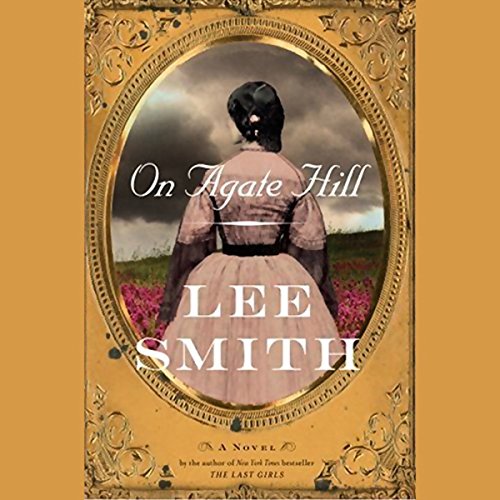 Award-winning, best-selling author Lee Smith is among the most authentic voices of the South and has been hailed as one of America's most accomplished authors. In this rich and bittersweet tale, she follows the shifting fortunes of a young North Carolina girl whose life is shattered by the Civil War.

Orphaned when her father falls in battle, Molly Petree is taken in by Uncle Junius on his Agate Hill plantation. But the terminally ill Junius is manipulated into marriage by his housekeeper, Selena, who inherits Agate Hill upon his death. Neglected and abused under Selena's watch, Molly escapes to a better life with help from her father's closest battlefield companion, Simon Black. But as she grows into a refined, educated woman, Molly remains haunted by tragedy.

Told from the perspectives of several of its colorful characters, On Agate Hill is the literary equivalent of an heirloom quilt, and one of Smith's finest achievements.

"Smith brings to [her work] an ear for speech and voice that most other writers can only envy." (The New York Times Book Review)
"Set among the ashes of the Civil War, Lee Smith's new novel brings a dead world blazingly to life....Smith, who is a subtly intrepid and challenging storyteller, never allows her narrative to slip into kitsch, stereotype or melodrama." (Washington Post's Book World)
"An authentic American saga, bittersweet as an Appalachian ballad, peopled with wonderfully vivid characters, so brilliantly constructed we never even notice the quilt-like artfulness of its design. (Kirkus Reviews)

What listeners say about On Agate Hill

I could not put this down, to my husband's regret. Having never read Lee Smith before I went into this with hesitation. Her vehicle of story telling (documents) was ingenious. I found this to be a wonderful story with great character voices reading the material. And the music, all placed in appropriate areas, to be an welcomed and natural addition to the storyline.
Well Done Ms Smith.

I have read all of Lee Smith's books. This one is among my favorites. The voices of the characters in this audiobook were just perfect, and kept me gripped. If you like On Agate Hill, try Fair and Tender Ladies next.

This book was neither great nor bad. Just a nice listen. The narrators were good and though the story is told in many persons, it did not become confusing. The most interesting part of the book to me was how the different levels of society lived during Reconstruction. There was no glamour given to life before the war on a plantation nor was there the melodramatic tedium of reminiscing of the "good old days" in Dixie.

Move over Flannery O'Connor and William Faulkner, there's a new girl on the block. Beautifully conceived and written as a series of documents (diaries, letters, legal documents, etc.), the novel is here wonderfully recreated by a diverse cast of voices. You have to get used to the idea that the book will flow from place to place, rather like most people's lives, rather than setting up a singular plot and resolving it, and you will have to tolerate a n aggravating excess of infant mortality, but if you can get past those hazards you'll find a wonderful portrait of a certain time and place, with rich characters and powerful emotions. Ought to be in college literature classes, and on teenage girls' nightstands, both.

I have read all of Lee Smith's novels and this one does not disappoint. Her storytelling is like the weaving if a magic carpet on which you travel through time.

This audio production is so well done with voice actors who bring each character alive so authentically. I was sorry when it was over as I enjoyed my time with every memorable person she created. I highly recommend this.

A sad, but beautiful journey

This was a powerful, beautiful, heartbreaking, happy, rich and full journey. Molly's story is one that will touch the heart and soul of anyone who reads/hears it and will have you cheering for her from start to finish. Lee Smith is a master and this is most certainly in her top 5!

It could have had a little more history in it, but the story was good enough I could look over it. It had a few little twists that made it stand out.

If you want to know some of the unique nuances of Southern Culture, you can trust Lee Smith to deliver. So many details are captured and woven perfectly into a truly beliveable story. Mollys ability to survive and perservere makes me more appreciative of my own life. I love reading a good southern novel that can take me back to the South I know. The soft musical ending helps to ease you out of that time and back into the present. I would love to meet Lee Smith and spend an afternoon on the porch with a pitcher of "Sweet Tea" and sharing stories.

Would you listen to On Agate Hill again? Why?

I'm not one for listening to books twice - so no.

The character development. I knew those characters.

I thoroughly enjoyed it.

I had the opportunity to meet Lee Smith in a writer's workshop years ago. I found her delightful, down to earth, honest. I've loved her books for years but hadn't read one in a while. When this one was available on a special offer, I snatched it up. At first, I wasn't too sure I was going to get into it, but as it winds its way through the life of Molly Petrie, I was caught up and ultimately riveted. I was sobbing in my car at one point, deep wrenching sobs. The mixture of sadness, poignancy, wit, beauty, and honesty is a beautiful thing to savor. I highly, highly recommend it.

This Book Is Just Superb You Have To Listen

What was one of the most memorable moments of On Agate Hill?

This book is about dealing with deep deep grief and doing more than surviving. It is so very well written. It is in my top ten of best books