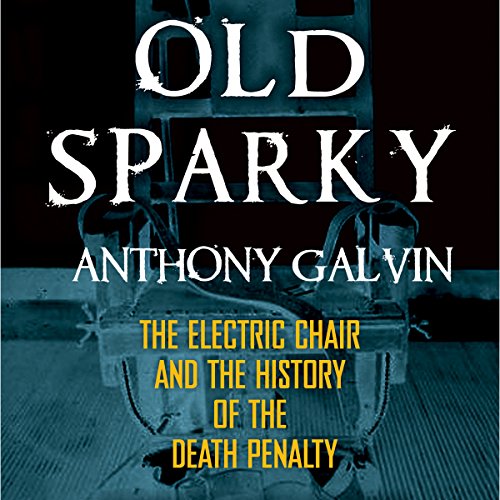 The Electric Chair and the History of the Death Penalty
By: Anthony Galvin
Narrated by: Jack Reynolds
Length: 8 hrs and 30 mins
Categories: History, Americas
5.0 out of 5 stars 5.0 (2 ratings)

In early 2013, Robert Gleason became the latest victim of the electric chair, a peculiarly American execution method. Shouting "pog mo thin" ("kiss my ass" in Gaelic), he grinned as electricity shot through his system. When the current was switched off, his body slumped against the leather restraints. And Gleeson, who had strangled two fellow inmates to ensure his execution was not postponed, was dead. The execution had gone flawlessly - not a guaranteed result with the electric chair, which has gone horrifically wrong on many occasions.

Old Sparky covers the history of capital punishment in America and the "current wars" between Edison and Westinghouse, which led to the development of the electric chair. It examines how the electric chair became the most popular method of execution in America before being superseded by lethal injection. Famous executions are explored alongside quirky last meals and poignant last words.

The death penalty remains a hot topic of debate in America, and Old Sparky does not shy away from that controversy. Executions have gone spectacularly wrong, with convicts being set alight or needing up to five jolts of electricity before dying. There have been terrible miscarriages of justice, and the death penalty has not been applied evenhandedly. Historically, African Americans, the mentally challenged, and poor defendants have been likely to get the chair, an anomaly that led the Supreme Court to briefly suspend the death penalty. Since the resumption of capital punishment in 1976, Texas alone has executed more than 500 prisoners, and death row is full.

What listeners say about Old Sparky

Information not a sermon.

This was a good introduction to Old Sparky and capital punishment. Basic information minus moralizing.

Last execution in Ireland was 1954, not 1956 as stated in last chapter. More on the Philippines in the latter half of book but I would have liked to have seen more in depth research into electrocution in that country. Overall the book binges the reader up to date on the death penalty in the US.

Very informative with the facts laid out for one to form their own opinion. I liked the narrators accent a lot.

This was possibly the best impulse buy I’ve ever made. I got this book on a whim while browsing Audible without ever having heard of it. It is a fascinating deep dive into capital punishment in America, using specific cases to discuss the various methods used over the course of US history. The book doesn’t take a position on capital punishment- it seeks to inform rather than persuade and I’m confident that regardless of your personal stance on capital punishment, you’ll find this an enjoyable and informative listen. I wasn’t a fan of the narrator, who has an odd cadence that sounds like text-to-voice software. Still, I found myself so engaged by this book, I finished it over the course of 2 days. Highly recommended to anyone interested in true crime or capital punishment.

This history of America's death penalty and the use of the electric chair is the most interesting foot print in America's history.

Grisly but fascinating and well presented

I thoroughly enjoyed this. Obviously, some of the subject matter is disturbing and there is some detail in here not for the squeamish; some tragedies. However, taking it as what it is, this was a good length, reasonably unbiased presentation, well-narrated, and a successful blend of hard stats and human stories. It very much does what it says on the tin, in an un-tabloid manner.