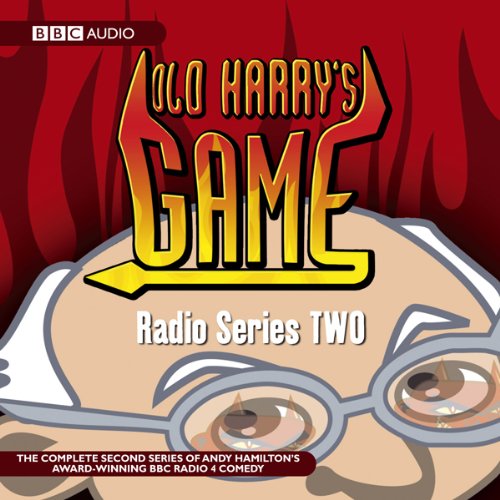 Then Satan has to deal with a rebellion and with human depravity on the increase, Hell's getting over-crowded. It's time for a new assistant. But will Scumspawn (Robert Duncan) get the job? Andy Hamilton stars as Satan in the comedy that's satirical, philosophical, inventive, topical - and timeless.

Old Harry's Game series 1 (and 2) is Andy Hamilton at his best; for me he is one of the funniest comedy writers currently living in Britain.

Andy Hamilton has written another super script for the denizens of hell. Will the devil find more ways to torment Thomas? Will Scumspawn get to be second in command? Will the professor win an argument out right? Listen and some questions may be answered!!

Andy Hamilton does it again. And again and...

Loved it so much I'm getting the complete collection... Slowly. All specials included. GO ANDY.

Hamilton at his best

As go as series one if not better the writing is fantastic as is Andy Hamilton performance.as is the rest of the cast.
Is so funny that you will find yourself laughing out loud.well worth a credit. I would be nice of Audible to put all 7 series in a collection for 1 credit. A 5 stars for Old Harry’s Game ⭐️🌟 🌟🌟🌟

loved listening, very funny characters. Perfect programme to listen to whilst doing housework, made the time go fast. also listened to it whilst driving to work, looked forward to the next journey.

Highly entertaining stories from hell! Listening to the series every day on my commute. Great buy!

Really good fun and makes you think at the same time. Well worth a listen.

A Hell to cheer low spirits

In true Dantesque tradition, the punishment reflects the sins committed, but freed from the constraints of literary Tuscan versification, this Prince of Darkness can indulge in more imaginative and personalised eternal torture. The incongruity of a Satan who speaks in a hypernasal Estuary English is joyful enough, but add his chief demon “Gary”, and his repugnance for Thomas, a mortal so vile that even the Devil recoils, his ambivalent relationship with the Professor, who has led a fairly blameless life, but a lifelong atheist, who initially refuses to believe in Hell, observing his new situation from the point of view of a scientist amazed at the inventiveness of his own brain (in coma/dream), who reacts to Old Nick’s most scary demonstrations with “Gosh!”.
Andy Hamilton’s “worldweary” fallen angel, in a job for eternity, despairing of the work load as the damned arrive faster than than Hell’s capacity to process them, and running out of space to house them, frustrated that he is no longer needed to spread mischief in the world, is a sharp social commentator.

Exactly my sense of humour, exactly hits the spot. The Devil is in the detail, and Satan is not very good at organization.

I can't remember who suggested this but I do hope that I thanked them at the time because this is hilarous.

Fantastic charactarizations and some real laugh out loud moments.