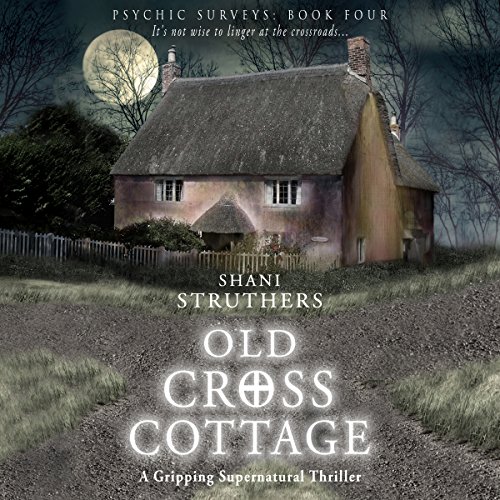 Although this is book four in the Psychic Surveys series, and some series elements continue, it can also be read as a standalone.

It's not wise to linger at the crossroads...

In a quiet Dorset Village, Old Cross Cottage has stood for centuries, overlooking the place where four roads meet. Marred by tragedy, it's had a series of residents, none of whom have stayed for long.

Pink and pretty, with a thatched roof, it should be an ideal retreat, but as new owners Rachel and Mark Bell discover, it's anything but.

Ruby Davis hasn't quite told her partner the truth. She's promised Cash a holiday in the country but she's also promised the Bells that she'll investigate the unrest that haunts this ancient dwelling. Hoping to combine work and pleasure, she soon realizes this is a far more complex case than she had ever imagined. As events take a sinister turn, lives are in jeopardy. If the terrible secrets of Old Cross Cottage are ever to be unearthed, an entire village must dig up its past.

Hoping that the series does not end!! Love these books! Sheila dearden’s performance is so enjoyable!

This book keep me going from start to finish! I loved it! I love being surprised at what happens next!

Even better than the last one

A terrific thriller and as always true love story. I loved it. Finished number 3 at 4am this morning. This o e at midnight.

as always, a truly great read!

I become truly invested in the psychic service team and book series. Ruby in the team keep you captivated.

I literally counted down the days until "old cross cottage" hit audible and literally within a few hours of it being on I downloaded it. I absolutely adore the characters, especially Ruby, Cash and Jed. The psychic surveys have had me glued and hooked from the very first book, I begin excited to read / listen but when I reach half way I start to feel dread that I am reaching the end of yet another amazing story and journey with the psychic surveys team, feeling lost and craving the next in the series. Shani Struthers is such a talented writer, she hits all the nails on the head, from having lovable characters to the chills down my spine in all the right places. I literally cannot wait for the next book! In fact I love the series so much im going to start all over again from highdown hall, hopefully finishing in time to start the next in the series. Shani I love your work! Please keep the psychic surveys going always. Lea Smith x

its fantastic... you have to go from book 1 to understand some bits but I'm hooked and will get all the other books by this author too x

a struggle to finish. Got half way through and have up. The naration is terrible , it grates on you. a poor story.

The narrator is AWFUL - as is the story

I haven't got to the end yet but cannot return as I just recently returned another really crap book via audible. Oh well I would like to use ffx but it has to be oh dear................ seriously who picks the classroom non reader who's speed is snail like and who's afflicted with not able to take on different voices and thinks its ok to pronounce Rs like Ws - NO ONE would pick this reader lol Wooby ......ha ha ha swugged ha ha ha.............jeeze get a grip audible!
The story is written and read for a child?

I have listened to all the stories up to this book so I am used to Ruby's behaviour but I ended up fast forwarding sections which were too frustrating with her idiotic behaviour in some of this book. For someone whos job it is to look for spirits and move them on, where her principle tactic is to understand the spirits reasons for being grounded, Ruby doesnt seem to show any ability to think laterally or come up with alternative solutions - as demonstrated in this book perfectly where I saw through the plot well within 1/3rd of the book but all was a surprise to Ruby. I hope the next books are an improvement or this could be my last in this series.

I enjoyed this one

Best so far and I found out this is a real place and you can rent it .
sounds like a plan !

These ladies have done it again. Shani has written another gripping story line and Sheila narrates this fantastically. 10 out of 10

Yeah not to much to moan about here , onward to the next book in the series, hoping ruby may have learnt a few lessons from her last adventure

I couldn't wait to read another book in the series and I wasn't disappointed. Love the characters, the atmosphere and the narration is great. Now I'm off to get the next one.