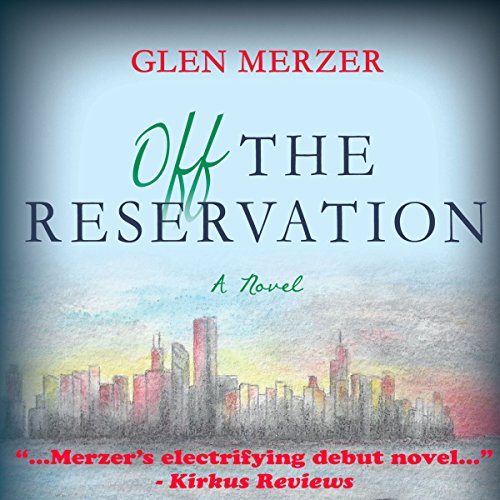 In a narrative rich in humor and uproarious dialogue, Off the Reservation explores modern presidential politics and whether honesty can find a place within it.

Congressman Evan Gorgoni of Bloomington, IN, has served eight terms in a dysfunctional Congress and reached his limits of frustration. A medical event brings on the epiphany that there is no point in continuing to serve. But his frank expression on Meet the Press of his rationale for ending his political career is met with the unbidden call that he seek the White House - an unlikely destination for a vegan congressman with a disdain for political posturing. If he's going to do it, he's going to do it as no one has done it before....

What listeners say about Off the Reservation

A Democratic Trump-A Political Comedy for Everyone

What made the experience of listening to Off the Reservation the most enjoyable?

The narrator has a clear, lively voice that matches the story perfectly. His delivery is witty. The story is brilliantly funny. It captures today's political frustration with Washington politics. The story makes penetrating political observations while remaining light-hearted.

It is totally hilarious and incredibly entertaining. I was laughing so much that my husband came into the kitchen from to join me in listening. This story is like a much smarter version of the movie "Bulworth."

The television interview where Congressman Gorgoni commits political suicide. Or the conversation between the liberal Congressman and the Republican boy dating his daughter. That was hilarious.

Who was the most memorable character of Off the Reservation and why?

The main character Evan Gorgoni is pretty memorable. He is a politician that is tired of politics. He is a man that wants to be true to himself despite the political cost, and he finds himself forced to run for president. The Republican kid is also a memorable minor character, and I liked the dog named Filibuster.

I received this book free in exchange for an honest review. It is awesome. Try it, you'll love it.

Off the reservation makes you wish Gorgoni would jump out of the page and run in real life. I didn’t always agree with some of the things Gorgoni said. Some of the things he focused on were weird (spoiler alert: stickers on fruit make a campaign appearance). Despite this I still loved his character. Some of the speeches in this book are not only funny, but bring up real issues (none of the distraction politics we are getting used to now).

The narrator does a good job. The press conferences and speeches especially sound like you are listening to a real person.

I received this book at no charge in exchange for an honest review.

Way Off The Reservation-Only .5 Before Giving Up


I RARELY turn off a book before finishing, *especially when I've been asked to listen to it in exchange for an unbiased review-as was the case here.

I HATE writing less than glowing reviews. I believe it takes a lot of work, time and effort to put a book out there and one is very brave to do it.

This is billed as a humorous book, making fun of today's government. However, it begins with the premise that Republicans want to throw the elderly, disabled & sick kids out on the street, hate the environment, clinging to God and guns. The Democrats are portrayed as a bumbling but harmless lot.

What could have been a short but comical, by staying apolitical, turned out to be an attack on Republicans and their beliefs. It is unfortunate, because Glen Merzer automatically alienates 1/2 of his potential audience.

Not a fun book and I am not a fan.

I recommend this book for those who are left of center in American politics.

Now for the boring but necessary stuff-

Thanks for checking out my review. Reviews help me in deciding whether or not to purchase a book, especially new authors or performers. Sometimes they are helpful and sometimes they're not. If you found this review helpful would you take a moment and select 'YES' below the next paragraph?

Follow me on Audible, if you'd like. My favorite books are contemporary romance and counter-terrorism/thriller books by authors like Vince Flynn (RIP.) However, you will find books from all genres, as I'm asked to listen to and review.

Authors & narrators, feel free to share my review on any other media that you would like. It's all yours, please include "review from DK via Audible" and link it back to this site.