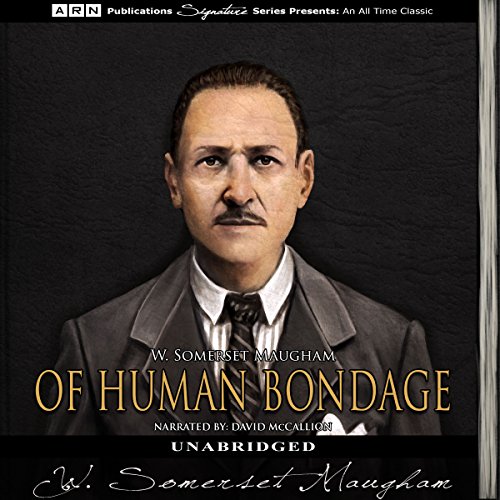 First published in 1915, Of Human Bondage is widely considered to be Somerset Maugham’s masterpiece and is believed to have been at least partially based on Maugham’s own life. This is the tale of Philip Carey, who is orphaned at a young age and raised by his uncle.

Of Human Bondage follows Philip on his travels to Paris, London, and Germany, taking the listener on an adventure of discovery as his travels brings him new discoveries and emotional growth. Philip’s life takes a turn for the worse when he meets Mildred Rogers and begins a destructive relationship that will have lasting consequences.

Orphaned at ten years old, W. Somerset Maugham was raised by his paternal uncle who provided little guidance and warmth during his childhood. Instead of going into law like other members of his family, he decided to become an author and was considered to be one of the most successful of his era.

What listeners say about Of Human Bondage

The only (very small) issue I had with this audio book is the narration sounded ever so slightly flat to me at times. Perhaps, however, it's my American ears not accustomed to the narrator's elegant accent. Regarding the story, I've never heard myself internally shouting "no! no!" or groaning so often at a character's actions. Do I understand Carey's obsessive love? Of course. But at some point, doesn't a human learn self-preservation? I'm unsure, in the end, Carey did. Happily, he's a fictional character.

One of my favorites, masterfully done in audio

I will have to read this book myself because I cannot stand the narration. The male narrator reads female characters in a falseto, which makes him sound as if he's performing in a Monty Python skit. It's incredibly distracting.

old classic does not mean good

Although this is recognized as a classic, I found at the story to drag. The protagonist is a chronic liar, lazy, having no integrity at all. Being raised in the church, I would think he would have some moral conscience, but no. The narrator did a fine job avoiding the obvious potential to sympathize with him. I couldn't finish it.